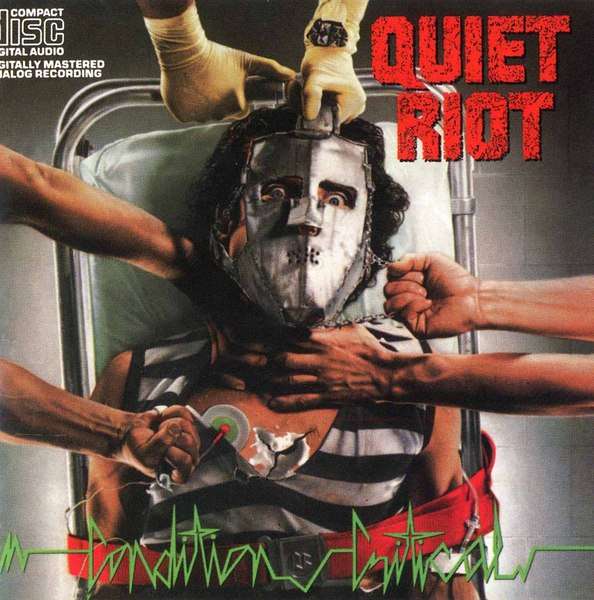 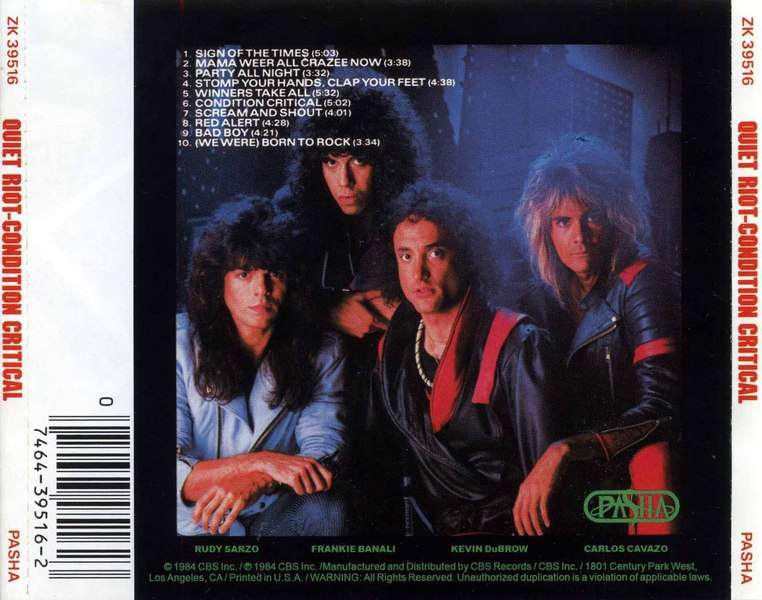 Quiet Riot is an American heavy metal band, best known for their hit singles "Metal Health" and "Cum on Feel the Noize". The band was founded in 1973 by guitarist Randy Rhoads and bassist Kelly Garni under the original name Mach 1, before changing the name to Little Women and finally Quiet Riot in May 1975. The band's name was inspired by a conversation with Rick Parfitt of the British band Status Quo, in which Parfitt said he'd like to name a band "Quite Right",and his thick English accent made it sound like he was saying "Quiet Riot".The band is ranked at No. 100 on VH1's "100 Greatest Artists of Hard Rock".The original line-up featured Rhoads and Garni with lead vocalist Kevin DuBrow and drummer Drew Forsyth. Their most commercially successful lineup consisted of DuBrow alongside guitarist Carlos Cavazo, bassist Rudy Sarzo and drummer Frankie Banali, and in 1983 released their breakthrough album Metal Health, which is known for being the first heavy metal album to top the Billboard album chart. Despite several lineup changes and brief breakups, Quiet Riot continued to record and tour until DuBrow's death from an accidental cocaine overdose in 2007.Banali revived the band in 2010, and the current lineup consists of himself on drums, lead vocalist Jizzy Pearl, bassist Chuck Wright and guitarist Alex Grossi.

Condition Critical is the fourth studio album by American heavy metal band Quiet Riot. Released in 1984, it was not nearly as successful as its predecessor (1983's Metal Health) in either fan reaction or sales. It was also given an infamous two-word review in Rolling Stone magazine: "Condition Terminal." However, it did sell over one million copies, peaking at No. 15 on the US Billboard album chart. Like the band's previous album, Condition Critical features a Slade cover song as the second track.Tracks "Party All Night" (also known as "Party All Nite") and "Mama Weer All Crazee Now" had music videos made for them, both receiving some airplay on TV. The same man with a metal face from the last album cover is on this cover as well as many of the band's subsequent album covers, establishing him as the band's mascot. The character also has cameos in both aforementioned music videos.The track "Stomp Your Hands, Clap Your Feet" shares its title with the original American title to Slade's 1974 album Old New Borrowed and Blue. As stated in the program Behind the Music, frontman DuBrow's nasty, combative attitude towards many music journalists as well as fellow heavy metal musicians – such as DuBrow labeling the magazine Hit Parader as akin to toilet paper – was felt by other band members and their producer to have hurt the album's reviews. DuBrow in later interviews has agreed and expressed regrets.Allmusic critic Stephen Thomas Erlewine gave Condition Critical a mixed-to-positive review, stating that he found the band's Slade cover to be the best track on the album given the "solid hook" of its guitar riffs.The album was not meeting the same level of sales as its predecessor, Metal Health, and the album received poor commercial success, 1/6th of sales. It reached the No. 15 slot on the Billboard 200.