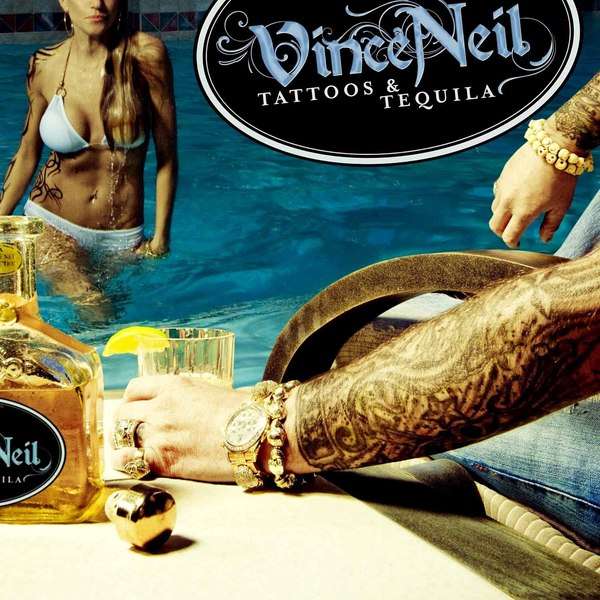 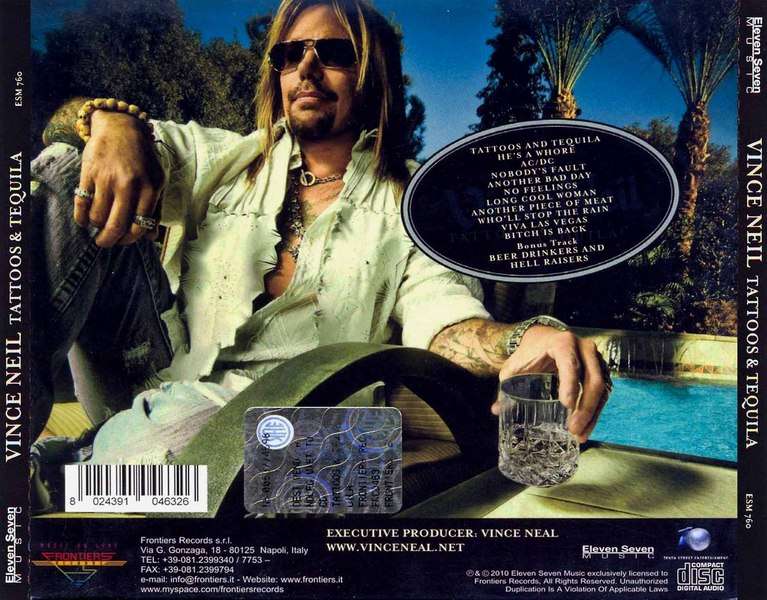 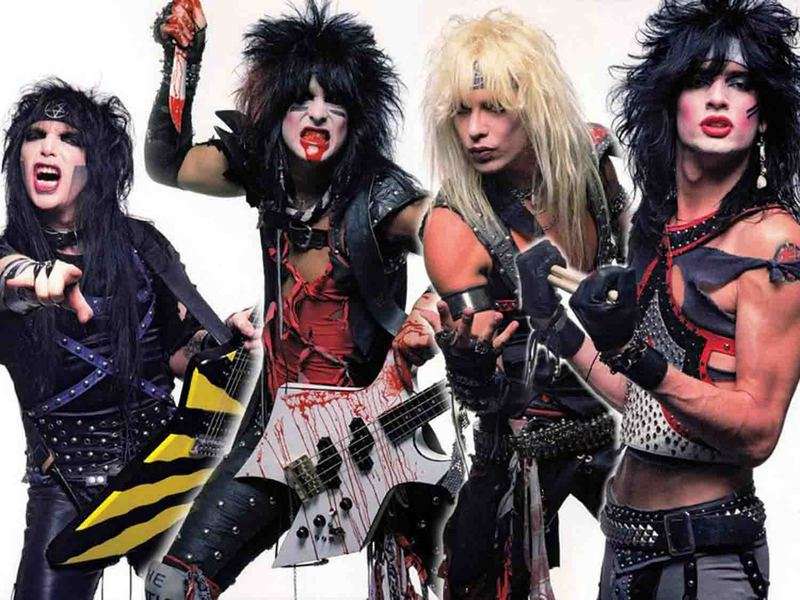 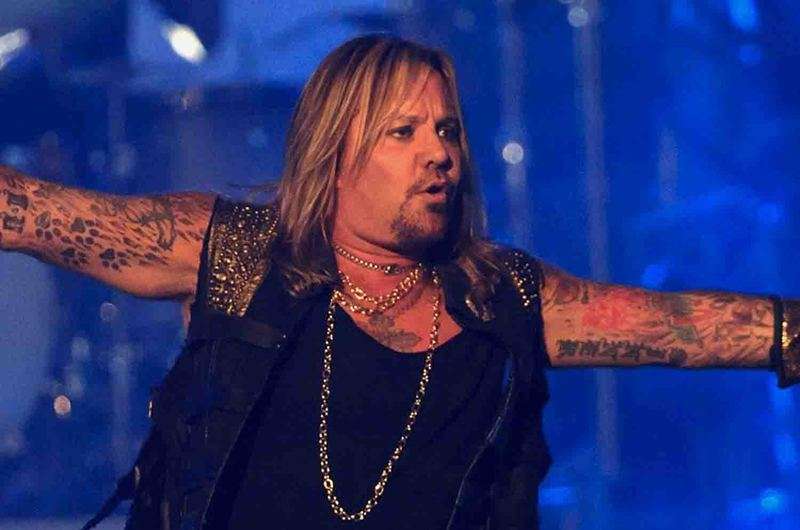 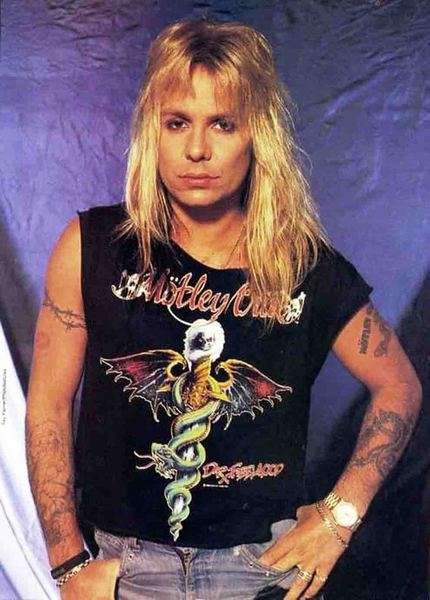 Vincent Neil Wharton (born February 8, 1961) is an American musician. He is best known as the lead vocalist of heavy metal band Mötley Crüe, but he has also released material as a solo artist. Neil served time in prison after being convicted of vehicular manslaughter in the 1984 death of Hanoi Rocks drummer Nicholas "Razzle" Dingley.Neil was discovered while performing with his band Rock Candy and joined Mötley Crüe in 1981. The newly-formed band was seeking a lead vocalist and were impressed by Neil after seeing him perform live at drummer Tommy Lee's suggestion. Lee had known Neil in high school and thought the vocalist's image would fit well with the new band. With Mötley Crüe, Neil made his recording debut with the band's 1981 debut album Too Fast for Love.The band's next album, 1983's Shout at the Devil, brought Mötley Crüe to international stardom, and a string of hit releases throughout the decade established the band as one of the most popular rock acts in the world. Producer Tom Werman, who produced much of Mötley Crüe's material in the 1980s, has said that Neil is the least artistic and least involved in the creative process of all the band members.Following the release of Mötley Crüe's 1991 greatest hits album Decade of Decadence 81-91, Neil and the band parted ways. Neil's drinking was beginning to affect his ability to perform, and after he failed to show up for a band rehearsal on February 10, 1992, Sixx, Lee and Mars agreed that the vocalist was "holding us back". At the time, the band blamed Neil's race car driving in the Indy Lights circuit as the reason for the decision, releasing a statement that read "Race car driving has become a priority in Neil's life. His bandmates felt he didn't share their determination and passion for music." Prior to his firing, Sixx says the band was open with him that they were considering a new lead vocalist, with Sixx telling him "We are down here working, and we want to be here. This isn't going to happen if you don't want to be here and we have to force you out of bed every afternoon because you've been out all night drinking." Lee accused him of failing to contribute to the creative process and Neil stormed out, and his firing was announced to the public four days later.Exposed was Neil's first solo album and was released in 1993. The album debuted at #13 on the Billboard charts.The album featured Steve Stevens (who played all bass and guitar tracks on "Exposed"), Dave Marshall, Robbie Crane, and Vik Foxx. The band eventually went on tour, opening for Van Halen.Pornographic film actress Janine Lindemulder can be seen in the video for the second single "Sister of Pain". The fourth single for which a video was produced, "Can't Have Your Cake", featured actress Pamela Anderson, and Neil's son Neil Wharton, who portrayed a young Vince Neil.In September 1995, Neil released Carved in Stone, an industrial-oriented album produced by the Dust Brothers. The album was recorded and was put on hold while Neil was dealing with the illness of his daughter Skylar. The album charted at #139 on the Billboard 200.The song "Skylar's Song" was released as a single for the album. The album sold fewer than 100,000 copies in the US, and Neil's contract with Warner Bros. Records eventually came to an end. The album was re-released in 2004.Vince Neil on stage with Mötley Crüe in 2007...Vince Neil has toured his solo band, which consisted of Slaughter members Jeff Blando and Dana Strum, as well as drummer Zoltan Chaney.The band came back into the spotlight after their Behind the Music episode aired on VH1 in December 1998 and became the highest-rated in the series. A DVD was issued with ten extra minutes of footage in December 1999.By 1997, Neil's solo career and Mötley's fortunes were declining, so the four reunited that year."They admitted they couldn't do it without me", he recalled, "and I wasn't selling records the way Mötley Crüe had."They released Generation Swine, which debuted at #4 on the Billboard charts. Tension soon erupted, however, this time prompting Tommy Lee to leave. The other members replaced him with Randy Castillo and recorded New Tattoo in 2000. The renewed band went on hiatus when Castillo died from cancer in 2002.Mötley's fortunes got a boost when Neil and Lee put aside their differences to tour in support of the 2005 compilation Red, White & Crüe. Dubbed Carnival of Sins, the tour featured acrobats, fire breathers and a midget as part of the overall circus atmosphere the band created.In 2008, Mötley Crüe released the album Saints of Los Angeles, featuring all the original members.Neil released his third solo album, Tattoos & Tequila, in 2010, his first solo release in seven years, following the live album Live at the Whisky: One Night Only in 2003. The album is a soundtrack to the book Neil released in the same year, "Tattoos & Tequila: To Hell and Back with One of Rock's Most Notorious Frontmen". Each song on the album corresponds with a chapter in the book.Neil contributed a cover of Japanese rock band L'Arc~en~Ciel's song "Blurry Eyes" to their 2012 tribute album.Following their 2014 and 2015 final world tour, Neil confirmed on September 13, 2018 that Mötley Crüe had reformed and plans to release new music.In November 2016, Neil revealed that he had been contacted and was scheduled to play with his own band at the Inauguration of Donald Trump in Washington D.C. on January 20, 2017. "I don't know how long I have to play. I don't know if the Republican Party says which (songs) to play and what not to do," said Neil.

Tattoos & Tequila is the third and most recent solo studio album by Mötley Crüe frontman Vince Neil. It is his first solo release in 7 years since the live album Live at the Whisky: One Night Only in 2003 and first solo studio album in 15 years since 1995's Carved in Stone. It is also Neil's first solo project as the current lead singer of Mötley Crüe and his first release on Eleven Seven Music.If you’ve followed Motley Crue‘s career you know that Vince Neil isn’t the brains of the operation. Vince is a great showman and frontman, but as a singer he’s average at best. With that said, you’d think with his third solo studio album he’d do better than issue a CD that consists of eleven cuts, mostly covers, with only two originals… neither of which he had a hand in writing.Tattoos & Tequila sounds like Motley Crue throwaways from the Red, White & Crue writing sessions that produced “If I Die Tomorrow” and “Sick Love Song.” The track “Another Bad Day”, originally written by Nikki Sixx for the New Tattoo album, doesn’t fair much better, but it’s tolerable. It’s all downhill from there though as Vince Neil and his very capable band which consists of Slaughter‘s Jeff Blando and Dana Strum with drummer Zoltan Chaney obliterate classics by Sweet, Aerosmith, Scorpions, Cheap Trick and Creedance Clearwater Revival.There are a couple of good covers versions on the record though — Vince‘s version of The Hollies “Long Cool Woman” turned out well, as did his version of Elton John‘s “Bitch Is Back”, and his take on The Sex Pistols‘ “No Feelings” is decent. The track to avoid on this album, or just in general for future reference, is “Viva Las Vegas” — it wasn’t cool when Elvis Presley recorded it and it isn’t cool when anyone else does. It’s a dreadful song plain and simple. There’s a bonus track of Vince butchering ZZ Top‘s “Beer Drinkers & Hell Raisers” from these sessions, but I have no desire to buy it or even attempt to download it for that matter.Tattoos & Tequila is the soundtrack for Vince Neil‘s soon to be released memoirs. Sound familiar? Well, unlike Nikki Sixx‘s Sixx AM album, rest assured that this album will not create a buzz and will fall into obscurity quicker than Nikki says, “did I mention I died twice?”Motley Crue fan or not, Tattoos & Tequila is a hard sell and it falls short. This album is nothing more than a ploy to push Vince‘s line of tequila, his club ‘Feelgoods’ and his book — which is fine, but at least put in an effort while making a quick cash grab.