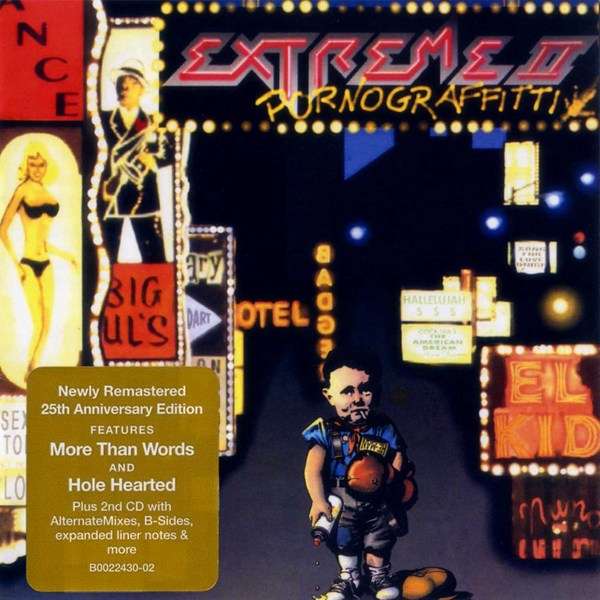 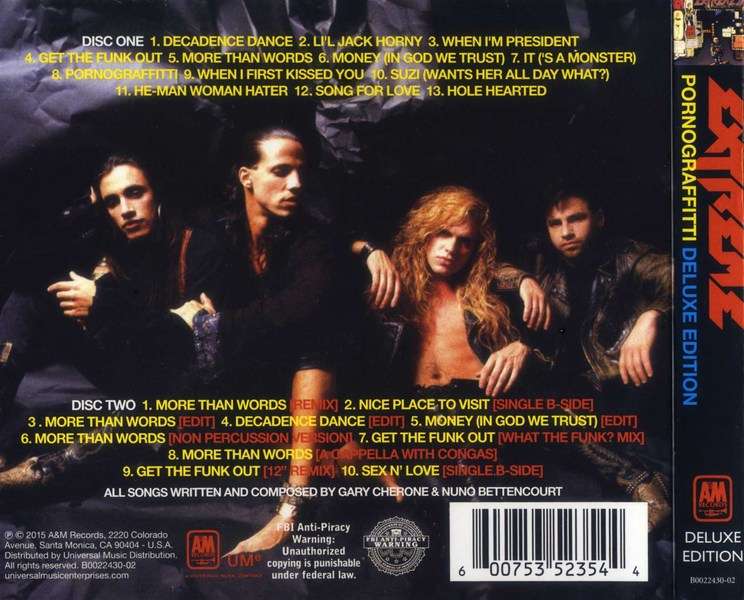 Extreme is an American rock band, headed by frontmen Gary Cherone and Nuno Bettencourt,that reached the height of their popularity in the late 1980s and early 1990s.Among some of Extreme's musical influences are Van Halen, Queen, Aerosmith and Led Zeppelin. The band played at The Freddie Mercury Tribute Concert in 1992, also jammed with Brian May and Van Halen, and Cherone joined Van Halen in 1996.The band has described their music as "funky metal" in the early days,but it would evolve much more in the mid-1990s by blending classic rock influences with post-grunge and alternative rock.They have released five studio albums, two EPs (in Japan) and two compilation albums since their formation. The band was one of the most successful rock acts of the early 1990s, selling over 10 million albums worldwide.Extreme achieved their greatest success with their 1990 album Pornograffitti, which peaked at number 10 on the Billboard 200, and was certified gold in May 1991 and double platinum in October 1992.That album featured the acoustic ballad single "More Than Words", which reached No. 1 on the Billboard Hot 100 in the United States.Extreme reformed for a short tour in 2004 playing in the Azores (August), in their hometown of Boston at the WAAF anniversary (September 19) as well as a few concerts in Japan (January 2005). After a hiatus during 2005, the band returned in 2006 with the "classic" Pornograffitti line-up to do a small, three-show reunion tour through New England.In July 2007 Bettencourt quit Satellite Party for the definite Extreme reunion with Cherone and Pat Badger. On November 26, 2007, the band announced plans for a world tour in the summer of 2008 with King's X as well as a release date for their new album, Saudades de Rock, produced by Bettencourt. Kevin Figueiredo, who played with Bettencourt in DramaGods and Satellite Party, took over drum duties for the band. Original drummer Paul Geary would still remain involved with the band, albeit in a management position. Singles from the album have been available on MySpace including "Star". The album was released on July 28, 2008 in France, August 4, 2008 in Europe, and August 12, 2008 in the United States.The band then embarked on the Take Us Alive World Tour, supported by King's X in the US and Hot Leg in the UK, with various other dates in Europe and Asia, through all of 2008. In 2009, the band continued to tour, co-headlining the East Meets West Tour with Ratt. The final date of this tour, in their hometown of Boston, Massachusetts, was recorded for the release of the band's first live DVD called Take Us Alive.According to a December 2010 interview with Cherone, Extreme had been writing new material for a new album, which they planned - at the time - to release in 2011. Asked in the same interview if the band will produce the new album by themselves or get an outside producer, Cherone replied, "There's talk of a few people. It would be great to get an A-list name. I don't know if that happens. My dream producer would probably be Rick Rubin. Here's a guy that's done Johnny Cash, the Chili Peppers and you know, Neil Diamond."[9] But due to conflicting schedules with Bettencourt supporting Rihanna on her tour during 2011, plans to go into the studio were postponed to 2012.Also in 2010 rumors started about possible commemorative shows for Extreme II: Pornograffitti, given the 20th anniversary of the record. Finally, in 2012, initially a small string of such shows in Japan has been confirmed, marking the full return of the band's activities after a hiatus when Bettencourt was on tour with Rihanna, as well as other side projects by other members, most notably Cherone's Hurtsmile. Extreme were to tour Australia in April 2013, with Richie Kotzen as support act, but the shows were cancelled due to scheduling conflicts with Rihanna's 2013 North American tour.

Extreme II: Pornograffitti is a 2CD, expanded edition of the million selling album with 'More Than Words' & 'Get The Funk Out' and a bonus disc of rare mixes and B-Sides, all re-mastered from the original tapes. It also includes an enhanced booklet with a new sleeve note by Metal Hammers Malcolm Dome, who has spoken to the band about the recording and the making of this album.Extreme II: Pornograffitti (A Funked Up Fairy Tale) is the second album released by the Boston rock band Extreme. The title is a portmanteau of pornography and graffiti.The album sold very well, peaking at #10 on the Billboard 200, and was certified double platinum in the U.S. by the RIAA. It is the band's best selling album.Two singles from Pornograffiti, "More Than Words" and "Hole Hearted", reached the top-5 on the Billboard Hot 100. Two other tracks, "Decadence Dance" and "Get the Funk Out", reached the lower half of Billboard's rock chart.In 2010, after the band's reunion in the previous years, rumours started about possible commemorative shows given the 20th anniversary of the record. In 2012, a small string of such shows in Japan was announced. In January 2014, the band confirmed they would be performing Pornograffiti in its entirety on their 2014 Europe and UK tour.Two-CD Deluxe Edition Via UMe Features Rare Mixes, B-Sides Remastered From Original Tapes, Slated For Release January 20, 2015.Band will tour in 2015, playing multi-platinum album front to back, featuring #1 hit “More Than Words,” Top 5 “Hole Hearted” and “Get the Funk Out”.Los Angeles, CA – December 9, 2014 – Extreme II: Pornograffitti (A Funked Up Fairy Tale) first came out on A&M Records in August 1990, the follow-up to the band’s 1989 debut. The album is considered, according to the newly penned liner notes by Metal Hammer’s Malcolm Dome contained in the accompanying booklet, as the “definitive album” of the band’s career.“This was the album where we found ourselves,” says vocalist Gary Cherone. “Our first album showed us to be the bastard sons of Queen, Aerosmith and Van Halen. But on the second record, we discovered our style and sound.”The deluxe edition reissue includes a full second album of rare mixes and B-sides re-mastered from the original tapes, and is scheduled for release on January 20, 2015. The original album, which went double platinum in the U.S. with more than two million sold, cracking the Billboard 200 Top 10, featured the chart-topping single “More Than Words,” the Top 5 “Hole Hearted” and the rock radio standout “Get the Funk Out,” which included vocals by Pat Travers. Dweezil Zappa, (whose solo album guitarist Nuno Bettencourt was about to produce) added some guitar riffs to “He-Man Woman Hater” when the band recorded some of the album at Scream Studios in Studio City, CA.Bettencourt was instrumental in initially composing the original songs, leaving Cherone alone to write the lyrics, which Cherone describes as “a coming of age tale… about an innocent boy who is growing up and exposed to sex, drugs and rock ‘n’ roll.”Bettencourt himself doesn’t see the disc as “a concept album,” but admits in the liner notes, “I suppose what happened was a little like writing a play, and then trying to make sure the songs fit into the plot.”Among the collectibles on the second disc of the package are a B-side a cappella version of “More Than Words,” rare B-sides “Nice Place to Visit” and “Sex N’ Love” and 7” and 12” remixes of “Get The Funk Out.”The album has come to define the band’s career.“I still constantly have musicians say to me that the album meant so much to them, and that proves what an impact it had. Its success established us as a major band,” recalls “decadent drummer” Paul Geary.“We came into our own on this album,” admits bassist/vocalist Pat Badger. “We honed in on our hard rock sound. The songs were riff-driven yet also had a little funk groove. But we were still diverse, which has always been one of our trademarks.”“It seems like another lifetime to me,” says Bettencourt, “I listen to it, and I can criticize some things. But I am still proud of it. And so many fans do still say it’s their favorite album.”Extreme will support the release of the reissued Extreme II: Pornograffitti (A Funked Up Fairy Tale) on their ‘Pornograffitti Live – 25th Anniversary Tour, with a series of concerts in the new year where they will play the entire album front to back