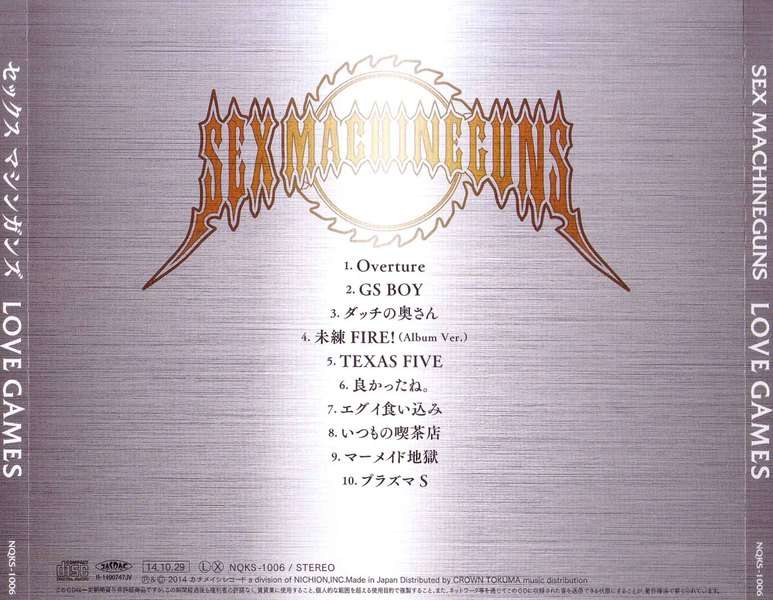 Sex Machineguns (stylized as SEX MACHINEGUNS) is a Japanese heavy metal band formed in 1989. Their music is characterized by a heavy focus on bass as well as extremely fast guitar and bass solos. The band uses the image of "shock rockers" by wearing crazy, exotic outfits like visual kei bands, although this image has been toned down, especially since 2003 when the long-term bassist Noisy left the band. The lyrics feature very off-beat and non-serious themes (the superior quality of Satsuma fruits in Ehime prefecture, minor annoyance in family restaurants, etc.).Casting themselves as shock rockers is not the prime selling point of their music though, as they also exhibit technical skill on their instruments.Sex Machineguns started in 1989 as an indie group, touring live houses and clubs. Their name is intentionally similar to that of the Sex Pistols and, according to the band, "implying that [we] machineguns are more radical than [the] pistols". They gained a large fan base quickly and sold out their shows. They went on tour and spread their popularity all over Japan. Once they got back home to release their first video and live CD in spring 1997, they had developed such a fan base that the first press of the video sold out instantly, to all parts of Japan from Okinawa to Hokkaidō.In 1998, Sex Machineguns made their commercial debut with the release of their first single on Toshiba-EMI Records: "Hanabi-la Daikaiten". The single sold out instantly, and it was decided they would go on a debut tour (which sold out in every location). Magazines began to run articles, and the "Hanabi-la Daikaiten" single sold steadily, skyrocketing the band's popularity. In September they released their first album, which was another huge hit. They went on many tours, all selling out, and topped the singles charts. As 1998 came to a close, the Sex Machineguns had topped the charts and played 62 concerts (all sold out).The band's front-man announced that the band would be taking a "activity pause" on March 20, 2006. All members at the time except for Anchang had left the band and formed a new band/side-project called Elleguns which released a 6-track instrumental. In 2004, Clutch.J.Himawari and Noisy have formed a 3-man group called Dustar-3 with Yuki (formerly of Lucifer). Later in December 2006,Circuit.V.Panther,Samurai.W.Kenjilaw, and Speed Star Sypan Joe have started a new band known as Cycle. Anchang later reformed Sex Machineguns in 2007 with Ryotatsu Kuwae on guitar and Kenichi Imai on drums, and they released three digital download-only singles that year.In 2008 Anchang formed the band Big Bites, with Natchin (Siam Shade) and Annie (The Yellow Monkey). Also in 2008, some footage of the band performing was featured in the film Global Metal during a discussion about heavy metal in Japan.On 2012, drummer Ken'ichi withdrew, and the band went to an indefinite long time hiatus.In 2013 Anchang and Shingo☆ formed a similar band called The Maintenance☆ (ザ☆メンテナンス), with Hirota on drums and second lead guitarist Master. They released their debut album Kōji-chū (工事中) on February 21, 2013.

Flamboyant Japanese power metallers Sex Machineguns have lifted the lid on the contents of their forthcoming tenth album. Entitled Love Games, the record will contain ten tracks including recent single "未練Fire!" (Miren Fire!), and will be the first full-length release with new drummer Leon. Love Games will be released on October 29th on Kanameishi Records, and the video of "Miren Fire!" can be watched below.