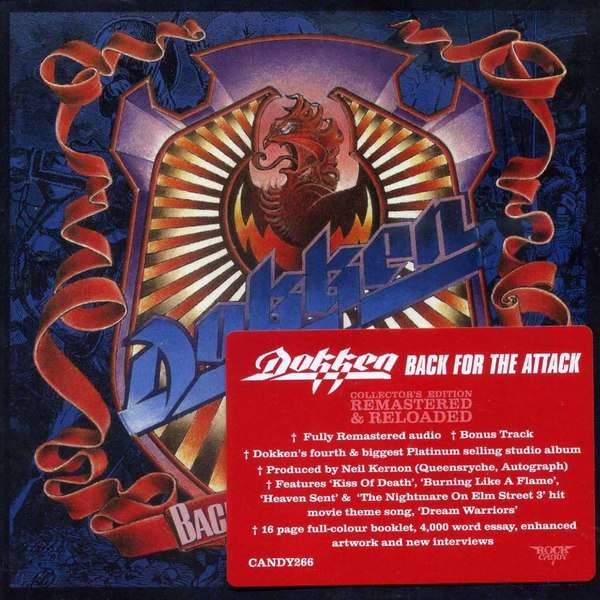 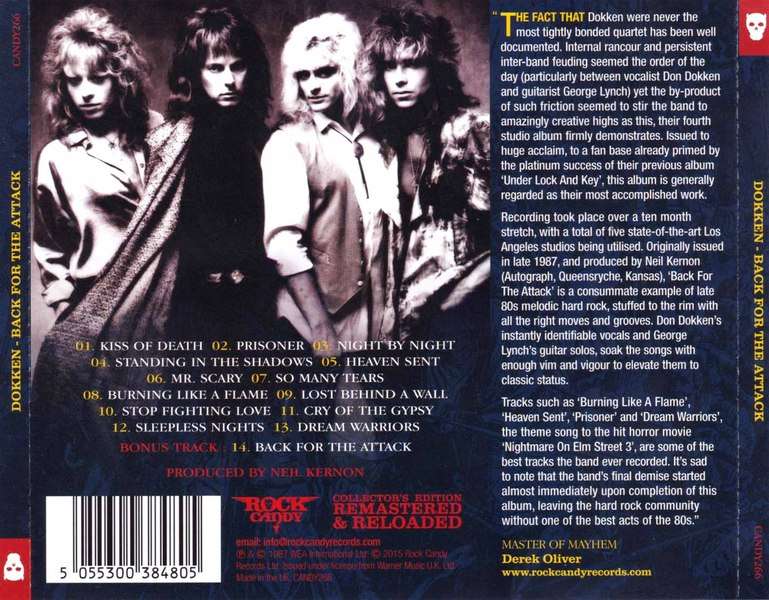 Dokken is an American heavy metal band formed in 1978. They split up in 1989 but reformed four years later. The group accumulated numerous charting singles and has sold more than 10 million albums worldwide.The band was nominated for a Grammy in 1989.Dokken was composed of founder Don Dokken on vocals, George Lynch on lead guitar, Juan Croucier on bass and Mick Brown on drums. In 1983 Croucier left Dokken in order to join Ratt and was replaced by Jeff Pilson. Currently only Dokken and Brown remain from the original line-up. After several personnel changes on guitar Dokken's attorney Jon Levin stepped in to fill the role in 2004. In 2001 Barry Sparks replaced Jeff Pilson on bass. In 2009, Sean McNabb (formerly of Great White and Quiet Riot fame) replaced Barry Sparks on bass guitar.

The fact that Dokken were never the most tightly bonded quartet has been well documented. Internal rancour and persistent inter-band feuding seemed the order of the day (particularly between vocalist Don Dokken and guitarist George Lynch) yet the by-product of such friction seemed to stir the band to amazingly creative highs as this album firmly demonstrates.Issued to huge acclaim, to a fan base already primed by the platinum success of their previous album Under Lock And Key, "Back For The Attack" is generally regarded as their most accomplished work.Arguably from a guitar stand point, this is Lynch finest guitar hour. He smokes throughout, his amps sounded like they were about combust and his 'attack' and aggresive playing was at high point. It always oved this record.Recording took place over a 10-month stretch, with a total of five state-of-the-art Los Angeles studios being utilised. Originally issued in late 1987, and produced by Neil Kernon (Autograph, Queensryche, Kansas), "Back For The Attack" is a consummate example of late '80s melodic hard rock, stuffed to the rim with all the right moves and grooves.Don Dokken’s instantly identifiable vocals and George solos soak the songs with enough vim and vigour to elevate these songs to classic status.Tracks such as ‘Burning Like A Flame’, ‘Heaven Sent’, ‘Prisoner’ and ‘Dream Warriors’ - the theme song to the hit horror movie ‘Nightmare On Elm Street 3’ - are some of the best tracks the band ever created.This reissue also features as bonus track the title track "Back For The Attack", which strangely did not make it into the original release.Hats off again to Rock Candy, their 2015 remaster sounds awesome. Cleaner, more seperation in the multitracks and double tracked guitar parts.The bass / drums tracks are re-surfaced by the remaster discovering some extra dynamics, as Lynch's interesting rhythms and little embellishments (clean parts) are seemingly higher in the mix. Also, Brown's sometimes dominant hi-hat seems to be a little less in your face, resulting more balanced.