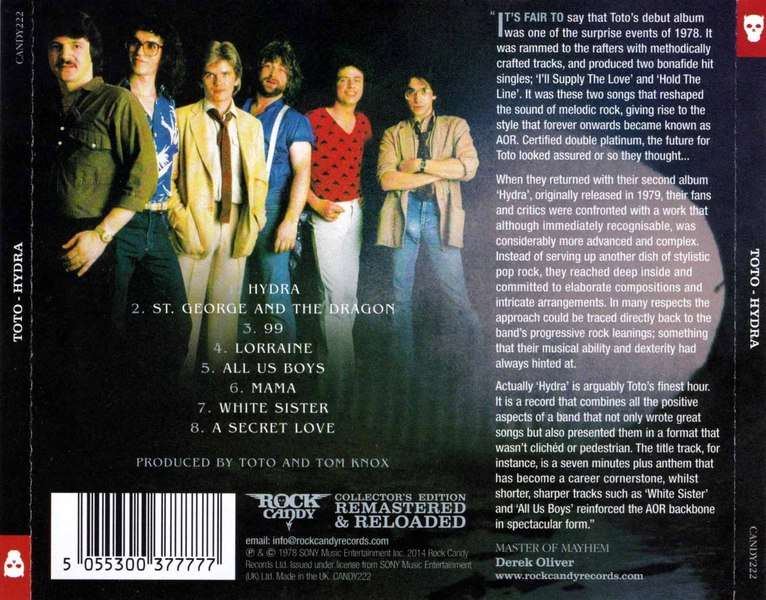 Toto is an American rock band formed in 1977 in Los Angeles, California. The band's current lineup consists of Joseph Williams (lead vocals), David Paich (keyboards, vocals), Steve Porcaro (keyboards), Steve Lukather (guitars, vocals), and Keith Carlock (drums). Bass player Nathan East is currently touring with Toto as a guest musician, as Mike Porcaro is too ill to tour. Toto is known for a musical style that combines elements of pop, rock, soul, funk, progressive rock, hard rock, R&B and jazz.David Paich and Jeff Porcaro had played together as session musicians on several albums and decided to form a band. David Hungate, Steve Lukather, Steve Porcaro and Bobby Kimball were recruited before their first album release. The band enjoyed great commercial success in the late 1970s and 1980s, beginning with the band's eponymous debut released in 1978. With the release of the critically acclaimed and commercially successful Toto IV (1982), Toto became one of the best-selling music groups of their era. They are best known for the Top 5 hits "Hold the Line", "Rosanna", and "Africa". Several changes to the lineup have been made over the years. In 2008, Lukather announced his departure from the band, and the remaining band members later went their separate ways. In the summer of 2010, Toto reformed and went on a short European tour, with a new lineup, to benefit Mike Porcaro, who had been diagnosed with amyotrophic lateral sclerosis (ALS) and is no longer an active member of the band.The band has released a total of 17 albums, and have sold over 35 million albums to date. The group was honored with several Grammy Awards and was inducted into the Musicians Hall of Fame and Museum in 2009.

TOTO's debut album was one of the surprise events in the music business at the end of the seventies. It was rammed to the rafters with methodically crafted tracks, and produced two bonafide hit singles; ‘I’ll Supply The Love’ and ‘Hold The Line’. It was these two songs that reshaped the sound of melodic rock, giving rise to the style that forever onwards became known as AOR. Certified double platinum, the future for Toto looked assured or so they thought.When they returned with their second album "Hydra", their fans and critics were confronted with a work that although immediately recognisable, was considerably more advanced and complex.Instead of serving up another dish of stylistic melodic rock, they reached deep inside and committed to elaborate compositions and intricate arrangements. In many respects the approach could be traced directly back to the band’s progressive rock leanings; something that their musical ability and dexterity had always hinted at. Given the success of their first self titled debut album it would be difficult to surpass it, but Toto did just that with "Hydra".The band went for an edgier sound instead of the stylistic pop rock sound that was their first album. It is a record that combines all the positive aspects of a band that not only wrote great songs but also presented them in a format that wasn’t clichéd or pedestrian.The title track, for instance, is a seven minute plus anthem that has become a career cornerstone showcasing one of best Steve Lukather's playing ever and some exceptional keyboard work by both Steve Porcaro and David Paich, whilst shorter, sharper tracks such as "White Sister" (featuring infernal solos by Lukather) and "All Us Boys" reinforced the rocking AOR backbone in spectacular form.The musicianship and production are first rate and this is an album that you can listen to, forget and go back and it still sounds fresh. "Hydra" was their most consistent, elaborated album from song to song but probably the least appreciated.Actually "Hydra" is arguably Toto’s finest hour as musicians; Lukather is on fire and his guitar playing is mind blowing. Jeff Porcaro drumming is phenomenal. David Paich and Steve Porcaro are wizards on the keyboards. David Hungate lays down a wicked bass, and Bobby Kimball sounds stronger, visceral at places."Hydra" rocks harder than most other Toto CD's, adding progressive elements to their melodic recipe and proving that these incredible musicians are able to play anything, and always in a victorious form.The Rock Candy job wisely respect the original frequencies resulting in a remaster that sounds with the original organic vinyl LP output but with a more potent gain and definition.