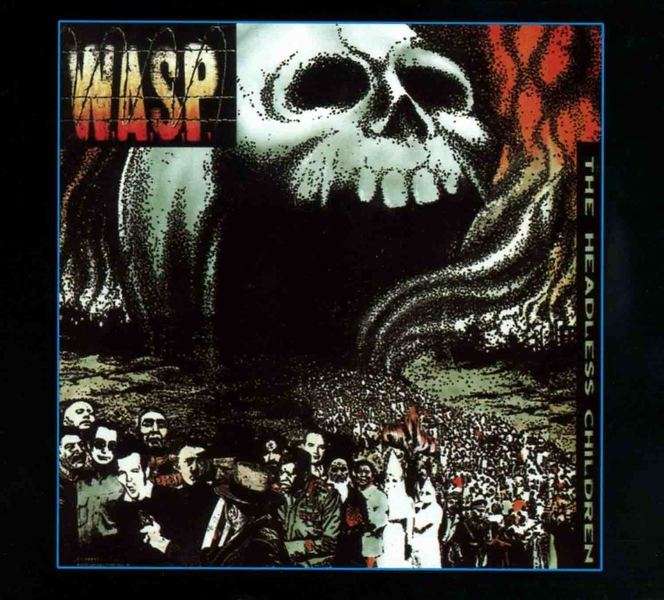 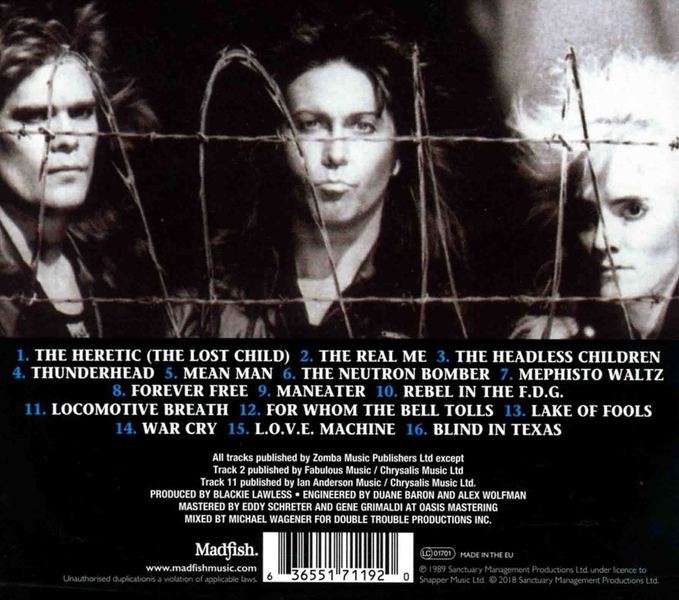 The Headless Children is the fourth studio album by heavy metal band W.A.S.P., released in April 1989 through Capitol Records.Madfish Music is a reputable reissue label known for quality releases, and they have just put out a digipak CD remastered edition of W.A.S.P.'s fourth album "The Headless Children", with the addition of 6 juicy bonus tracks.A creative and mature work, "The Headless Children" saw W.A.S.P. move away from the over-the-top antics that had made the band's name, and is regarded by many fans and critics as the one of the band's finest records.The line-up for this album was reduced in Blackie Lawless, longtime guitarist Chris Holmes, and King Kobra bassist Johnny Rod, with the addition of Quiet Riot drummer Frankie Banali, legendary Uriah Heep keyboardist Ken Hensley, and several other musicians contributing backing vocals, such as Lita Ford.The guitar tone is rough but belligerent, the riffs themselves aren’t as bumbling as they used to be but they still hold that distinct ‘80s tinge. Bass support performed by King Kobra's Johnny Rod I’d call their best, since the lines are great and you can actually hear them aside by the guitars.When Blackie was on bass on the previous albums, he really didn’t give a whole lot of spotlight to his own lines (or audibility), but at that time it was excusable because the songs were short and catchy.Here, they’re more refined and hold their own closer to a blubbery fashion where you can actually hear it protruding it’s lines against the rest. Drumming itself is vicious, helping attain that aggressive attitude that marks nearly the entire album.The album's best-known tracks remain the rocking "Mean Man" (an autobiographical tale about guitarist Holmes) and their terrific cover of The Who's Quadrophenia anthem "The Real Me". Pete Townsend declared that W.A.S.P.’s cover of “The Real Me” was more like what he wished the original version by The Who would have come out like.Well, if that’s true, then Blackie certainly outdid some aspects of his childhood heroes, because that’s not even the best track on here. No, the best one is the ballad “Forever Free”, one of the best songs from '80s rock music in general.Listening to “Forever Free”, I’ve never heard Blackie with so much anguish in his voice before this; it sounds like he can barely get through his lines – the passion, the personal touch, and the despair; it’s all so enduring.Other highlights include "The Heretic (The Lost Child)" with its galloping riff, dark thematic and epic build up, the booming epic "Thunderhead" and the rumbling, melting riffs of the title track.Then you have an angry, booze-sodden hard rock song in the furiously headbangable "Rebel in the F.D.G.".There's a little something here for everyone, and the variety is just delightful, making for a fully functioning banquet of '80s metal glory."The Headless Children" is nothing if not a manifesto to energetic, rocking mastery of the style. It's compulsively replayable, endlessly enjoyable and it just rocks like there's no tomorrow.By in large, this album marked W.A.S.P.’s journey into deeper and darker territories which, to this day, the band has still been living in. It's something like a prequel of their following masterpiece The Crimson Idol.W.A.S.P. have a lot of very good albums, and this is definitely one of their finest. The original release feels pretty lacking with only ten tracks and the experience goes by too quickly, so to find here extra tracks come in handy.This expanded reissue gives you not only good 6 bonus tracks, but also a sound boost thanks to a clear remaster that I’d praise.