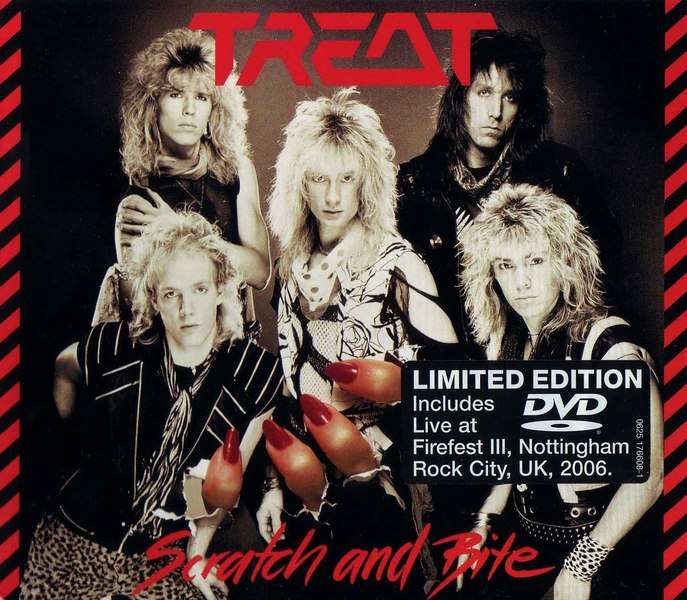 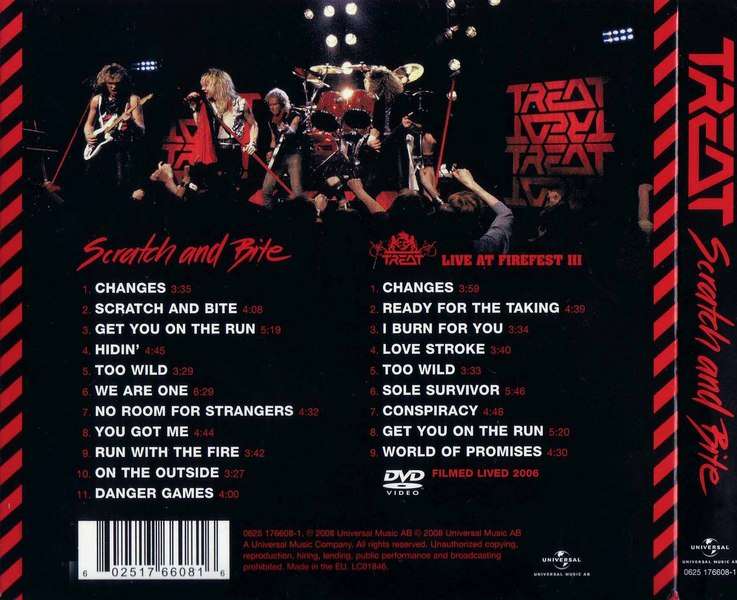 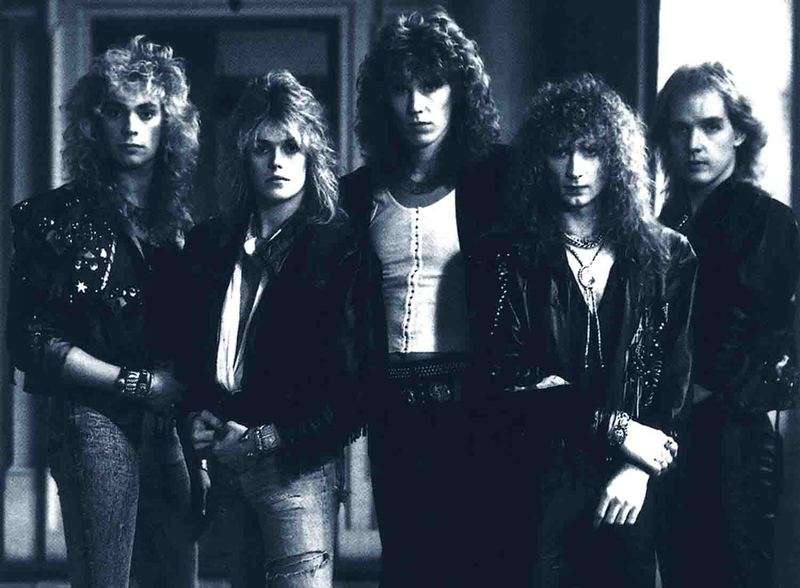 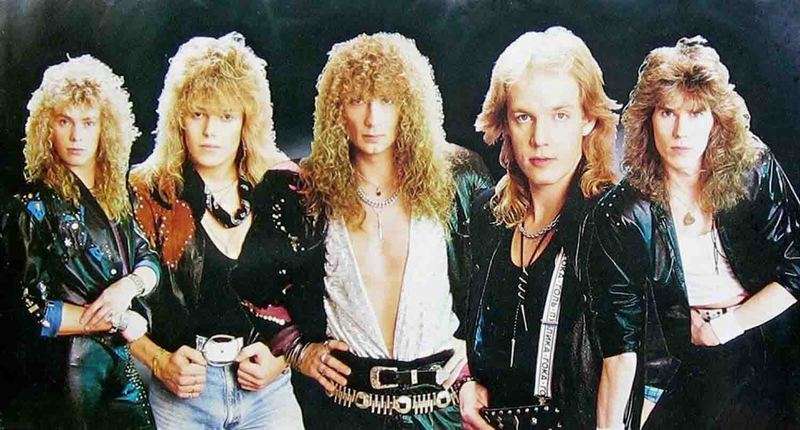 Treat is a melodic heavy metal band from Stockholm, Sweden. In the second half of the 1980s they had national as well as international successes with songs like "Get You on the Run", "World of Promises", "Party All Over" and the classic "Ready for the Taking".They played at rock festivals like Monsters of Rock in 1988 in Germany. They were also the opening act for Queen in Sweden in 1986 and opened for W.A.S.P. during their first Swedish tour.In 2005, they made a comeback and released the collection Weapons of choice 1984-2006 on March 19, which included the previously unreleased track "Still in Heaven" along with the two new songs "Go!" and "Burn for You". Their first reunion show was in front of 4000 people at the Sweden Rock Festival on June 10, 2006.They were signed to the labels Mercury, Vertigo and now Universal.The song "Roar" from the album Coup de Grace is the main theme of the Facebook app game "Monster Galaxy" and also played significantly on the GOM Star League Starcraft tournament.In late 1990, the band replaced Ernlund with current Candlemass singer Mats Levén, who had previously sung with the band Swedish Erotica and recorded their last album of the 1990s. The self-titled album Treat was released in 1992 and again failed to gain any success for the band and led to the band's break-up on the 26th of March 1993.In 2005 a compilation album was released called Weapons of Choice, which sold surprisingly well around the world and led to the band reforming with the 1989 line-up plus Nalle Påhlsson on bass. The band then signed a deal with Universal and played at the Sweden Rock Festival on June 10, 2006. On March 19, 2010 the band released their reunion album Coup de Grace which was a great success for the band and has led to them touring the world for the first time since the 1980s. The album received positive reviews from the press.In July 2014, Treat played the Väsby Rock festival in Upplands Väsby, Sweden.

Scratch and Bite is the debut studio album by the Swedish hard rock / heavy metal band Treat. It was released on February 24, 1985.In 2008, "Scratch And Bite" was remastered and re-released, including two bonus songs and a DVD performance of the band.The first single was an big success and they only managed to play two live gigs (1:st gig ever: 8th of June /1984) before WASP wanted them as support act for their first tour in Sweden. Next single "You got me" released Oct.-84 proved once and for all that Treat were no one hit wonders, even if it didn't sell as much as the debut. They went back into the studio in Dec-84 to record their first full lenght album, an album that they were going to name "Inside Out" at first, but as you might know ended up as SCRATCH AND BITE.a pic of the S+B hereAnders Wikstrom said they were heavily influenced by Def leppard´s "Pyromania" when they went into the studio to record Scratch and Bite and there´s no doubt about it either, as many of the songs do sound a lot like Def Lep. Including "No Room For Strangers", which really is nothing more than a rip off of "Billy´s Got a Gun". SCRATCH AND BITE was released in the early summer of 1985 and the band had a couple of minor hit songs in Sweden with "Get You On The Run" and the lovely power ballad "We Are One". Both did well in the charts and the later became a much-played song at the biggest radio show for the youth (Tracks). Treat came from nowhere and actually took over the title as "The Best Hardrock Band" in Sweden that year, as Joey Tempest & Europe had recording and voice problems. Then of course came the payback with THE FINAL COUNTDOWN in 1986.They toured all over Sweden in the summer of-85 and everything seemed to be hunky-dory in the Treat camp, before "disaster" struck down without a warning. Drummer Mats "Dalton" Dahlberg suddenly left the band without a notice or explanation in August-85! It came out years later that Dahlberg believed that Ernlund had been talking behind his back about the way he played his drums and that he wasn´t pleased with him at all. It also came out that Dahlberg left in anger without a word to Ernlund or any other band member about the whole thing. Looking back, it may seem a bit unnecessary and childish, but Dahlberg made his mind up and left before anyone even had a chance to stop him. He later formed his own band DALTON who released two pretty good melodic albums (THE RACE IS ON - 1987 & INJECTION -1989) which had songs co-written by both Jon Bon Jovi & Michael Bolton etc.The new drummer Leif Sundin who had his roots in Jazz music and his father was a well known Jazz musician in Sweden, was maybe a strange choice for a hardrock band even if Sundin played with "Six Feet Under" for a while! The very same band which Bjorn Lodin (Baltimoore) and the Johansson brothers Jens & Anders (Yngwie Malmsteen, Dio, Stratovarius, Hammerfall etc.) once played with. It became clearer after a while though that Sundin wasn´t the right man for the job, he later teamed up with the famous POP band "Style" even if he at first recorded the next album with Treat.They decided to bring in ex-Plasmatics / Little Steven bassist Jean Beauvoir (who at the time lived in and recorded two solo albums in Sweden) as producer for the next single. So... once again back into the studio and the result "Ride Me High" was released in December of -85 with a new and fresh sound. Maybe not fresh enough, as they decided not to continue with Beauvoir as producer for the next album THE PLEASURE PRINCIPLE, even if the song itself was pretty catchy and the single did okay in the charts. Nope, instead they hooked up with a more experienced producer and musician: Gregg Winter, who also helped out with the songwriting on six of the nine tracks even if Wikström as always was the main songwriter with Erlund taking care of the lyrics.