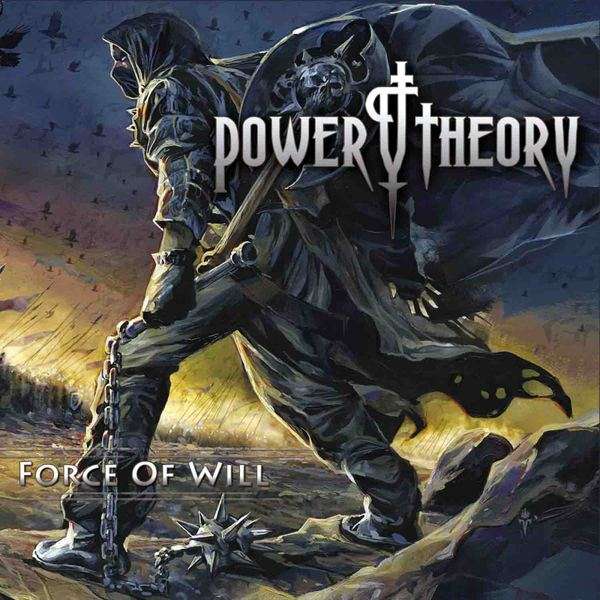 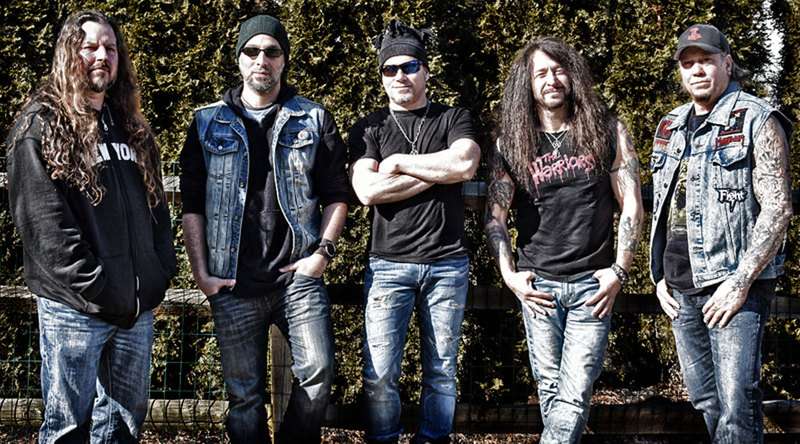 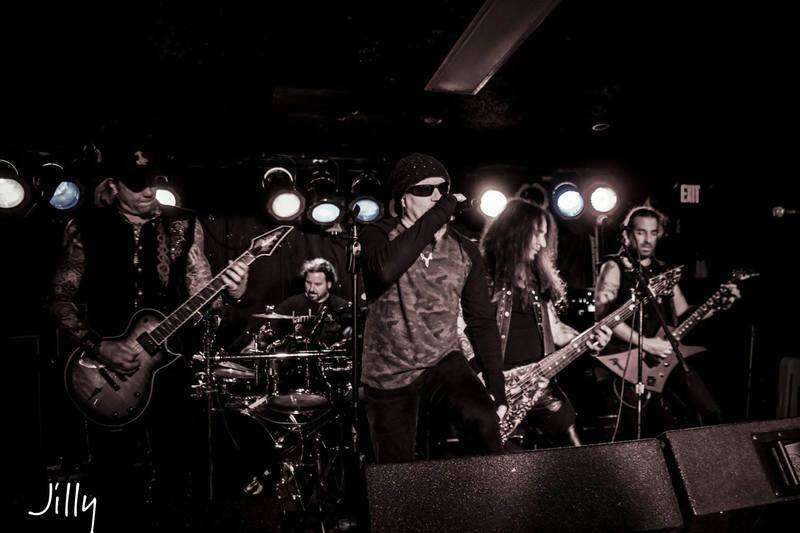 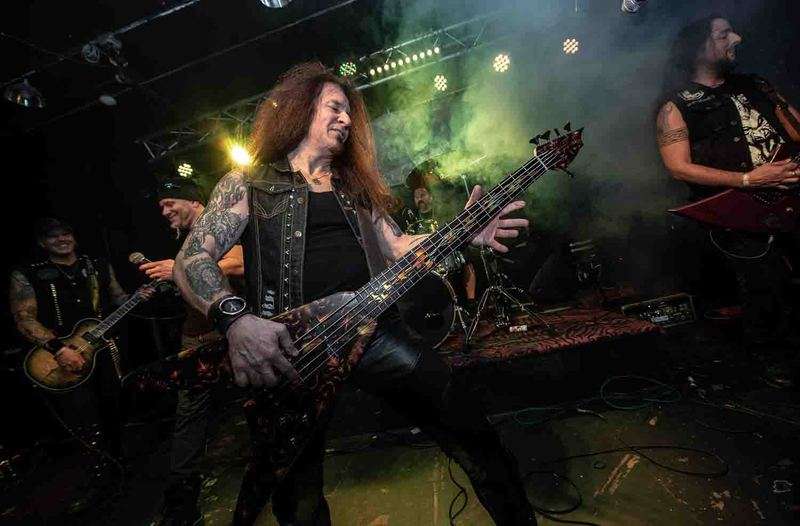 Power Theory was formed by guitarist Bob Ballinger in 2006 who envisioned an inspired blend of the iconic Heavy Metal sounds of the early 80’s & NWOBHM fused with the aggressive stance forged by modern Power Metal. Ballinger’s songwriting pulled directly from guitar heavy bands such as Judas Priest, Saxon, Accept & Iron Maiden while also retaining the melodic sensibilities the style is known for. The early days of Power Theory saw several lineup changes as trying to find musicians within the Philadelphia area who were of the same mind in their influences was an arduous process. Finally armed with a stable lineup in 2007 the band hit local venues ferociously, honing their early songs through numerous live performances before recording and releasing an EP independently in May, 2009 titled “Metal Forever”.Always pushing forward, 2010 saw Power Theory follow up this EP with the release of their debut full length album “Out Of The Ashes, Into The Fire”. They hired notable producer Achim Koehler (Primal Fear, Sinner) for the mastering and on the strength of it landed a distribution deal with Pure Steel Records, Germany who released it internationally and through the Keep It True Festival in 2011. During this time more prestigious gigs were being offered with Power Theory opening for heavyweights like Accept, Kreator & Helstar, all of this topped by an invitation to play the 2012 Warriors Of Metal Open Air Festival in Ohio, USA. This festival was also used as the launch of their 2nd full length album “An Axe To Grind” again released internationally via Pure Steel Records.As Power Theory continued fleshing out and defining its sound it became evident that a 2nd guitarist and vocalist with greater range would be required for the much stronger and diverse material Ballinger was crafting for the next album with greater emphasis placed on more serious and sometimes darker toned concepts. The band hit the road for 14 shows in 15 days directly supporting Vicious Rumors & Seven Witches in fall 2013, followed by a homecoming show opening for Raven, multiple Philly area shows and a second stage headlining appearance at the 2014 Ragnarokkr Festival in Chicago. Recording immediately began afterwards with Carlos Alvarez (Helion Prime, Judicator) brought on to engineer, produce & mix the album, Peter Baltes of Accept serving as executive producer and mastering by Brett Caldas-Lima (Ayreon, Devin Townsend) on what became the 3rd full length album “Driven By Fear”, released internationally via Pure Steel Records in October 2015. Prior to the album’s release Power Theory was invited to play Hard Summer Festival in Falkenfels, Germany and a show with FireForce in Belgium. Returning from Europe multiple live dates were played in 2016 to a steadily increasing following throughout Florida, Ohio, Michigan, NYC and of course Philadelphia. Power Theory was once again invited to perform at the Hard Summer Festival in Germany and also at the Rock On Fest in Budapest, Hungary, capping off yet another highly successful year filled with even greater achievements.. 2018 is going to be the year another album will be released. With new permanent additions, Johnny Sasso on Drums and Carlos Alvarez on lead/rhythm guitar, it only completes the most ambitious writing process in the band’s career. In addition, the band welcomed new lead singer, Jim Rutherford To the mix and add a little need a grit to the already powerful upcoming songs on the forthcoming album.

POWER THEORY is an American Power Metal band featuring a traditional five-man lineup and epic, powerful music. If you’re looking for thematic but simple Power Metal with good musicianship and theming without the bells and whistles, this is for you.“Morior Invictus” is the intro to the album, featuring a heavily produced high-pitched guitar that almost sounds like a synthesizer. The musicianship is good on it, though, featuring intricate work and nice harmonies near the end, culminating in a more atmospheric tone.“Force of Will” is a traditional Power Metal song, featuring loud, heavy, melodic instrumentals. The vocalist has an operatic, powerful low tenor that lends itself well to the genre. However, like the intro, the song is highly produced, and it’s especially apparent in the guitars. The vocal harmonies are great though, especially in the chorus. The guitar solo picks up a third melody riffing off the first, keeping the song engaging with variety.“Draugr” starts with muddier guitars before launching into a speeding riff. The tone is lower than the last song, and the vocals are more intense and gravellier. The guitars have some great edge in the chorus and as the song builds. The lyrical narrative is enticing and fits well with the ominous, angry tone of the song. The song has some interesting crescendos and descends near the refrain, varying the song as it goes on.“If Forever Ends Today” has a steadier, anthemic riff from the get-go. The melody and the vocals have a slight Nu Metal bend thanks to the down-tuned guitars, steady beat and the gravelly vocals, minus the angsty lyrics.Mountain of Death” has a slightly different melody, so it hasn’t become entirely monotonous yet, but it’s similar enough to the previous song. They both have strong, anthemic, mid-tempo music. The vocal melody line is beautiful and full of varying notes. The solo carries the vocal melody throughout with a little variation here and there. Overall, they’re both solid songs, but I’m growing concerned that the album will be full of similar-sounding songs without variation.“Th13teen” shows some promise, beginning with an intricate, almost acoustic-sounding rhythm guitar line before transitioning into a traditional Speed Metal song and a syncopated vocal opening, which is choral background pre-verse. It’s faster than the last two songs, at least, until the verse kicks in. Then, the song becomes mid-tempo and anthemic like the last two. The guitar in the solo almost has a dueling quality to it with some of the melodic starts and stops.“Spitting Fire” starts off as pure Thrash. The variety is getting good, and the vocal melody is energetic; everything from the instrumentation to the harmonies fit thematically with the song. “Bringer of Rain” brings the tempo back down with an ambient beginning with acoustic-sounding guitars. It doesn’t last long, but the thundering tempo fits into a tempest-at-sea theme. The melody shift in the chorus is harmonic and really entices the listener, bringing them back in the song.“Path of Glory” is a fully charged song that rides hard from beginning to end. It has a galloping guitar riff and a high-pitched, clear and operatic vocal melody to carry the song through. It showcases that the singer can hit the high notes well. It also features great, crashing snare throughout.“Shadow of Man” is a little slower, still low and heavy. It’s more anthemic and pounding. Some guttural emphasis in the second verse is really well-placed, punchy to draw the listener back into the song or make you pump your fist. The solo carries its own melody over the riff and the long notes are beautiful against the punchier, banging vocal melody. It’s my favorite song instrumentally and thematically. The melody change at the end was unexpected and a pleasant surprise.“The Hill I Die On” is the closing song. It sounds like a slow song because of the intro, which would make sense because of the elements shown so far on the album. Lyrically, it begins as a Folk narrative, complete with lighter, softer guitars that almost sound like a mandolin. Then, it explodes into a faster, heavier melody with drum rolls and galloping guitars. The choral elements throughout the song make for a grand finale, as do the melody changes.Overall, the album demonstrates great theming and musicianship. While parts of it sounded heavily produced, especially at the beginning, and some sounded a little consistent, it was a great ride with overall distinctive songs. If you’re looking for a hard, fast, Power Metal ride throughout the entire album without all the songs sounding the same, this album is for you!