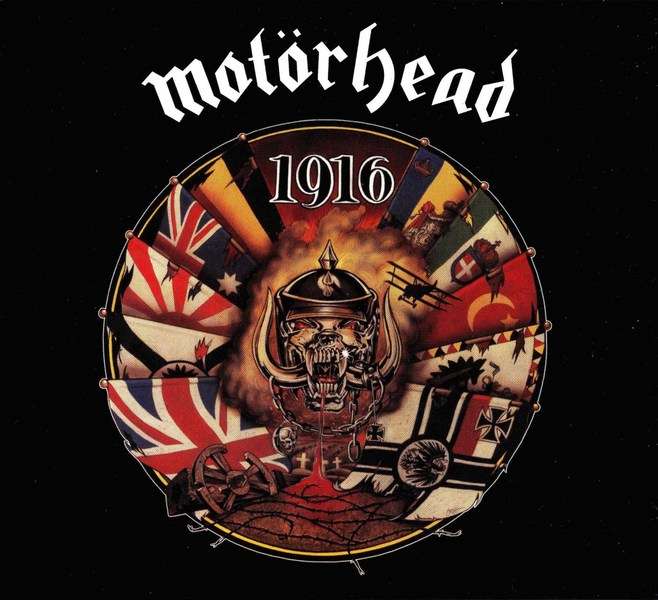 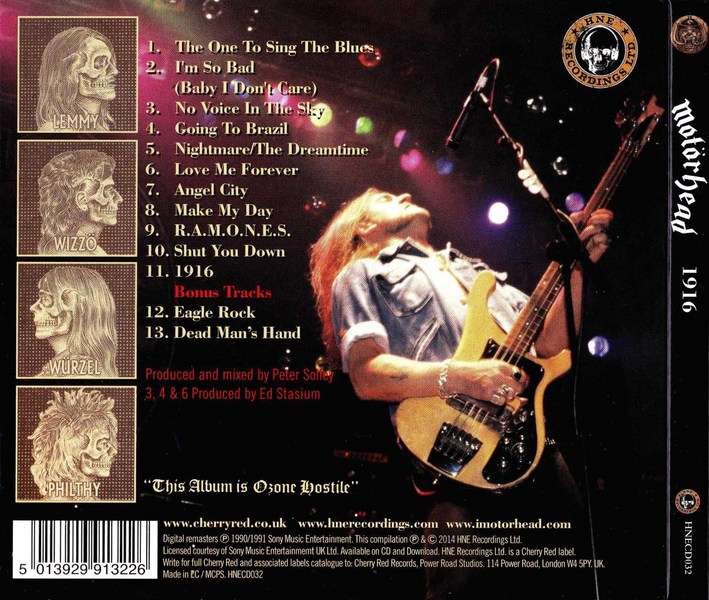 Motörhead have never JUST been the best rock'n'roll band in the world. They've never JUST been the loudest. Or the hardest. Or the toughest. Or the bad-ass-est.!No...Motörhead are also a lifestyle.Motörhead are a mindset, a belief, a way to live your life, a way to both survive and beat a society that sometimes seems intent on grinding you down.That is why Motörhead have chosen now, in what might be some of the most tense times in recent global history, to release a hell- raising, rebel-rousing rock'n'roll statement known as The Wörld is Yours.“We don’t fit into anything!” roars founder and heartbeat Lemmy Kilmister, "the only thing we fit into is 'Motörhead' because we are Motörhead music and that's what we do!"Written and performed by Lemmy Kilmister, Philip Campbell and Mikkey Dee in both Los Angeles and Wales, with production once again by Cameron Webb, The Wörld is Yours serves to remind everyone that you should never stop questioning or critiquing a society that would surely chew you up and spit you out if given half a chance."They're not my favorite topics, but I feel compelled to talk about them because they're so fucked up," furthers Lemmy, "everything is mind control, everything is the man trying to stop you thinking and only do what he says. It's never worked yet, but it hasn't stopped them trying. What amazes me is people don't say anything, people didn't rise up and complain. In the old days, they had a revolution and threw the British out!"And with 10 soul-scorching testaments to the unbridled power this world-famous trio continually maintain, The Wörld is Yours!delivers some of the finest, most important Motör-music yet. On instant classics such as “Get Back In Line,” Kilmister thunders that, “The way we are is not the way we used to be my friend,” and “We are trapped in luxury, starving on parole, no one told us who to love, we have sold our souls,” whilst on “Brotherhood Of Man,” Kilmister roars “You cannot hide the truth from me I know what's in your heart, greed and jealousy each equal, all your days now dark.”And with the defiant, uproarious “Rock 'n' Roll Music,” Kilmister and Co. remind everyone that “rock'n'roll music is the true religion” and “rock'n'roll even gonna set you free, make the lame walk and the blind see...”"Rock'n'roll's been around forever," laughs Lemmy, "and that's because it's fucking GREAT! I recently did a show with my other band, The Headcat, alongside Jerry Lee Lewis. He's 75, and he didn't need any assistance on that piano. He played “You Win Again” which is my favorite song of his, marvelous! That's the great thing about rock'n'roll, it's been 'old' forever, but it never dies."Recorded during the late spring of the year, the album's creation was thrown into turmoil by the poor health and eventual sad passing of Philip Campbell's father. The situation dictated that Philip needed to be home during some of the scheduled recording time, so Motörhead hired a studio in Wales where Campbell was able to continue working on ideas and record tracks, whilst first Mikkey and Lemmy, and then just Lemmy, laid down the rest of the album in L.A. Being Motörhead, nothing phases them, and with The Wörld is Yours,!the band have triumphed over personal adversity to produce an absolute stormer in this, their 35th year as THE greatest, loudest and just plain goddam coolest band around."Rock'n'roll is a vocation, you do it because it's what you do," concludes Lemmy. "In the beginning, you do it because you want to, but then you run into the business side of things, which is a shit, and so you either decide to battle through and carry on, or you quit and become a sheet metal presser...and I was never any good at a factory job!”He might not be able to beat the dent out of your car door, but Lemmy and Motörhead remain untouchable in the art of hammering your ears, eyes and spine with their unique Motör-music.

Here’s the Hear No Evil / Cherry Red remastered Expanded Edition of MOTORHEAD‘s album “1916“, which despite of being released few years ago went sold out soon and it’s very hard to find now.Released at the beginning of 1991, this is the band’s ninth studio album, their first for major label Epic, and their first new album in almost four years. It was Motorhead’s first record to make a dent on the US Billboard charts. Marking Lemmy’s relocation to Los Angeles, “1916” was nominated for a Grammy Award.For years, Motorhead’s career roared along like a raging juggernaut, as fast as the songs they were famous for writing. But when the venerable metal godfathers unleashed “1916” on Jan. 21, 1991, four long years had passed since their previous offering.For a band known for hammering out new material on a yearly basis, this was unheard of. Part of the delay was the result of recording contract with an independent-label owned by a manager in whom they’d lost all trust. There were also personal distractions — none larger than band leader Lemmy Kilmister’s decision to abandon London for Los Angeles, where he would quickly make himself at home, become a fixture on the Sunset Strip and live out his days.However, in 1990 Motorhead’s fortunes were turning, thanks to the support of new manager Phil Carson (an industry legend who had worked with Led Zeppelin, AC/DC and many others) and the group’s first major-label contract with Epic. The time was ripe for Lemmy, guitarists Wurzel / Phil Campbell, and drummer “Philthy Animal” Taylor to start compiling the songs that would make up “1916”.Many old fans of the band were worried about the new ‘American base’ of Motorhead, and if they would change the musical style to more ‘Californian sound’. But the Lemmy keeps focused, and while “1916” is more polished in production and should be one of the band’s most diverse albums, the re-location of the group hadn’t made its sledgehammer approach any less appealing.As sobering as his reflections on the horrors of World War I are on the title song, Lemmy is unapologetically amusing on “Going to Brazil” or “Angel City” (an ode to the “beautiful” party people of L.A.).Whether the subject matter is humorously fun or more serious, Motörhead is as inspired as ever on “1916”.Alongside familiarly crafted Motorhead bangers like the relentless “I’m So Bad (Baby I Don’t Care)” and a the dirge-like “Nightmare / The Dreamtime,” fans found a ballad, “Love Me Forever,” and a title track that was all stark synthesizers and a cello backing a shockingly vulnerable Lemmy vocal.Other songs include the catchy “No Voices in the Sky”, and the rocking, punchy opener “The One To Sing The Blues”.“1916” doesn’t quite have the legendary reputation of Ace Of Spades or Overkill, but it’s a very strong collection of tracks all the same. The album’s stylistic variety does an excellent job of highlighting sides of the band not often seen before. It’s not only an essential listen for fans and casual listeners alike, but also an effort that’s fun to throw in the face of the hacks who think that Motorhead albums all sound alike.This is a very good remaster by HNE, including a complete booklet with lyrics, rare images & memorabilia, released with the input from Motorhead expert Mick Stevenson, and featuring as bonus two non-album tracks ‘Eagle Rock’ and ‘Dead Man’s Hand’.