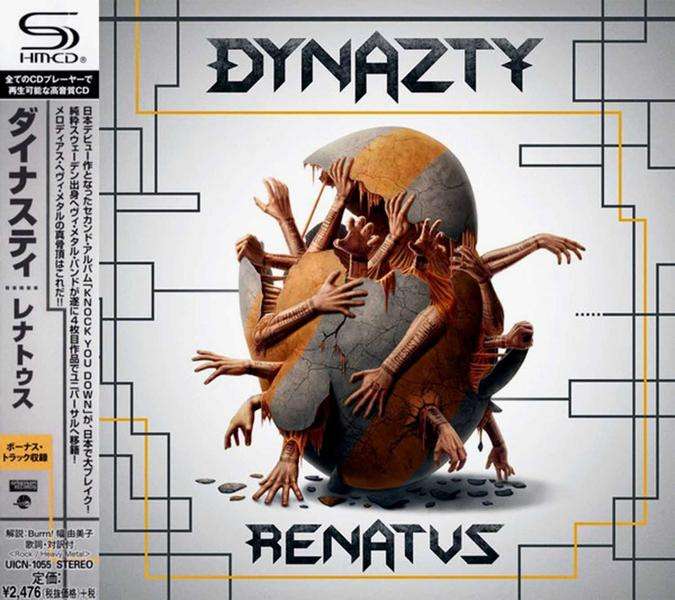 Early 2008 in Stockholm, Sweden, four young and aspiring musicians got together to form a band.With a want for something majestic and a fascination for egyptian history Rob Love Magnusson(guitar), George Egg(drums), Joel Fox apelgren(bass) and John Berg(guitar) took on the name of Dynazty.Lacking a singer the four-piece went on a massive manhunt, ultimately finding Nils Molin through an ad via the myspace community. A sound began to establish as songs were written and the completed line-up decided there was no time to fool around. Financing the recording of a full-length album themselves was the only right thing to do and thus the Polar studios and producer Chris Laney was booked for the fall of 2008.Recording and mixing of the yet untitled album was finished in november and in January of 2009 Dynazty signed a license deal with american label Perris Records for a release in june.Bring The Thunder as the modestly debut album was titled, was recieved well by critics, praising the bands retro-sound and overall playing ability. But due to the lack of promotion and availabilty in Sweden, home country of Dynazty, the album and the band was never really recognised in swedish media.Nonetheless in october the same year, Dynazty embarked on a european tour to promote the album, supporting swedish hardrockers The Poodles. But before the tour started John Berg decided to leave the band to pursue other musical directions and was temporarily replaced by guitar player Mano Lewys.As 2010 commenced the now four-piece felt the need to write new material and finding a record label that could support the release of a new album properly. After long negotiations the band finally signed with swedish/american label Stormvox records, owned by the infamous swedish actor Peter Stormare. Writing the new album took up most of the year and finally in january of 2011 the swedish dynasty flew over the atlantic ocean to record in Los Angeles, California.Before the release of "Knock You Down" as the follow up to "Bring The Thunder" was named, Dynazty was privilaged to make a guest appearence in the swedish finale of the Eurovision Song Contest in front of approximately 3,7 million viewers performing a cover version of last years swedish winner song, "This Is My Life". The song became a minor hit in sweden and established Dynazty as a force to be reckoned with within the music business.When "Knock You Down" was finally released in April it climbed to #1 on the swedish metal charts and to #21 on the mainstream charts. Dynazty toured Sweden in support of the album throughout the summer and in the fall the same year they toured the UK together with Electric boys and Miss Behavior among others.While Dynazty was officially a four-piece, Mano Lewys had been their second guitar player ever since 2009 acting as a hired gun. But before the UK tour commenced Mano had decided to quit his post and focus on his personal life. So the band said a freindly goodbye to a long time freind and started looking for a replacement. Long time freind and even in-law reletive of Rob Love Magnusson, Mike Laver was brought in to help out on the UK tour. Back in Sweden after the tour Dynazty felt a need to once and for all complete the line-up and make it a five-piece again. And if there was someone the band wanted more than any other guitarist, and had proven he was up for the task it was Mike. My saying yes when asked, Mike completed the line-up.During the late summer and fall, the band had written material for a new album. Eager to release an album in early 2012 the five-piece started the search for a producer and a studio. Wanting a change in sound the band visited Peter "Pain" Tägtgren in his studio The Abyss discussing the possibility of working together. After much e-mailing and schedule arrangements the studio was booked for Dynazty in december.Right around this time it was also made official that Dynazty was to compete in the swedish preliminary of the Eurovison Song Contest in february 2012 with the song "Land Of Broken Dreams". "An honor and an offer that could not be refused" the boys said.When december commenced Dynazty was recording their third album, their second in one year in The Abyss studios with producer Peter Tägren at the helm and the first with Mike Laver on guitars.The upcoming album entitled "Sultans Of Sin" will hit the shelfs and servers in February 29:th 2012 and as Nils Molin, Rob Love Magnusson, Joel Fox Apelgren, George Egg and Mike Laver rushes into the new year with a spanish tour in january I can only rest my case and say:This is just the beginning....

“Renatus” is the Latin word for reborn or rebirth, a very well chosen title for the Fourth record by Sweden’s DYNAZTY, because it’s indeed a new start for this interesting band even if I had perceived this Power Metal animal asleep in the Sleazy Metal outfit for a long time. When their first album “Bring The Thunder” was published in 2009 thru Perris Records, I had already identified a certain je ne sais quoi, that made ​​me say that the group was more than another gang of peroxide Headbangers in spandex, I stated, in my review at the time, that Nils Molin’s voice reminded me a young James LaBrie (WINTER ROSE era), I saw in them something more ambitious than just Hair & Sleaze Metal… STEELHEART meets SWEDISH EROTICA with a European feel… A real Melodic Metal potential with class. Their second and third album, were quite good and I praised their qualities everywhere but it was clearly set in a anthemic side of Hard Rock / Euro Metal, which is of course great, nonetheless now they are back, with a new recruited fierce line up for their most controversial album in order to prove that they aren’t a one dimension act.Indeed, most of the observers, followers and formers only had saw them just as a CRASHDIET / CRAZY LIXX clone, and now all of sudden, they perceived DYNAZTY as the natural son of NOCTURNAL RITES / DREAM EVIL and LAST TRIBE, it’s a valid analysis but in fact it's the same band, they just unleashed their hidden instinct and break the tradition rules, this music was already present in their DNA, like a virus in full mutation mode-a disease spread over the Swedish spring water for 30 years now. So, I’m not in agreement with those who states that “Renatus” is a radical change of musical direction, it’s certainly harder than before and by far their most heaviest work to date, but they didn’t betrayed anything or anyone, it’s for me a natural progression to something more elaborated and most of all the album is pretty Amazing and still very melodic, DYNAZTY on the other hand, is thrilling and exalting.In fact, their melodic side is as prominent as it ever was, only exposed under a different lightning and expended by a new alloy, still magnetic especially with cuts like “Dawn Of Your Creation”, “Runamok” and the first single “Starlight” which are all very catchy and infectious as their past hit "Lands Of Broken Dreams" or "Top Of The Line". Some songs like the fast paced “Cross The Line”, “Unholy Deterrent”, “Incarnation“, the hammering “Sunrise In Hell” or the more progressive and epic “Salvation”, may take a bit longer to grab your mind, but that’s also a real strong asset for this album…Everything isn’t easy to catch at first because of its obvious density. Other good virtue of “Renatus”: an immense variety in the tempos and in the ambiances, enhanced with Keyboards layers set in a modern approach and a damn efficient sonic rendition provided by Jonas Kjellgren (SCAR SYMMETRY / CIVIL WAR / STEEL ATTACK / THE UNGUIDED) to give full justice to the new pounding rhythmic section.The original members performance are also in a full shining mode, of course Nils Molin still possess a powerful and unique voice, with a good vibrato and an impressive range with an ability in reaching each and every high note with ease. Guitar wizards Rob Love Magnusson and Mike Lavér provides some impressive solos, harmonized & lead duels wrapped in a big fat tone. Their guitar work is stellar, stretched until to compete with the highest level of the most reputed virtuoso Swedish players, this elements is the icing on the cake, adding the final touch to the already terrific bands specificities. To conclude this album the last cut “Divine Comedy” contains some new vocal elements courtesy of Peter Tägtgren (HYPOCRISY / PAIN) in a new duality with the high pitched screams of Molin, another cleverly crafted track with a great chorus like MIDNIGHT SUN meets PERSUADER meets H.E.A.T.The Japanese bonus track for the Shm-CD edition is the best way to achieve the determination of the DYNAZTY’s message, the new updated re-recorded under a testosterone rush version of their signature song “Bring The Thunder” is a clear manifesto for their new vision and for their freedom to evolve… The Future is promising but the present is even more exciting.