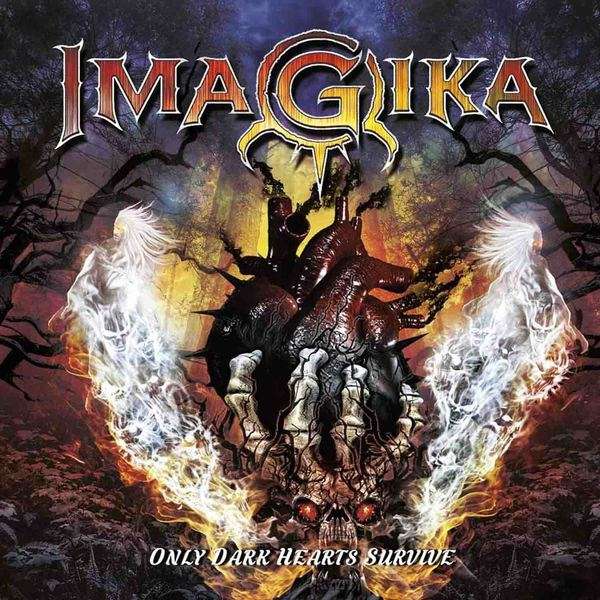 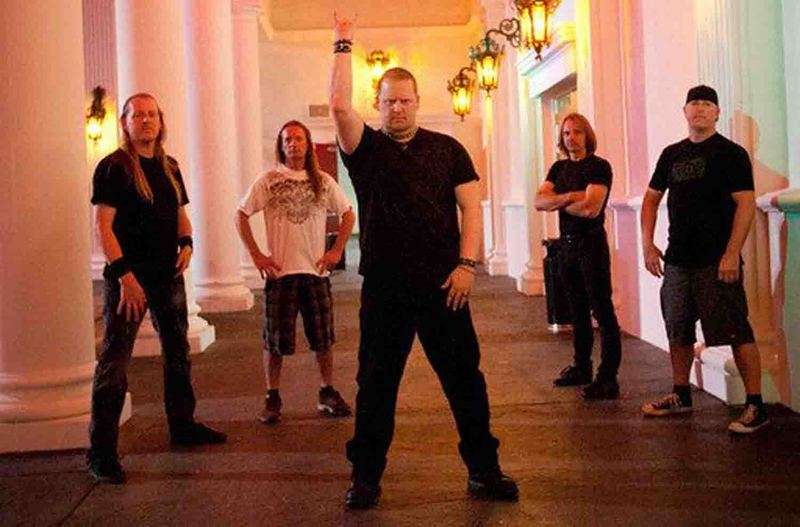 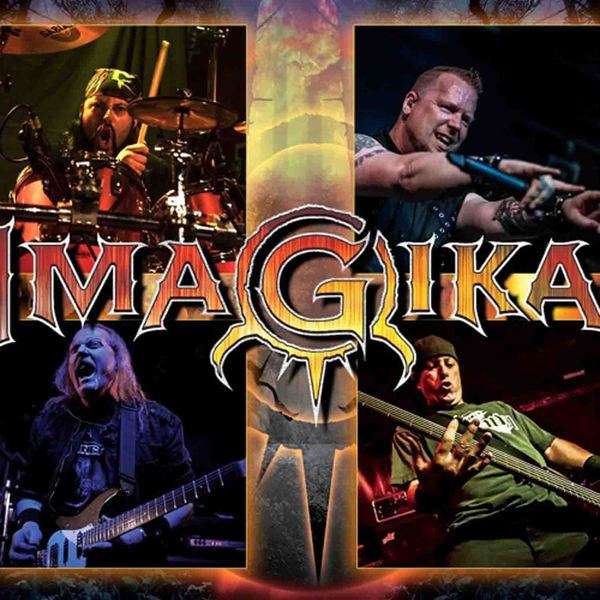 SF Bay Area’s Imagika was formed in 1993 by original members Steven Rice (guitar), Henry Moreno (drums) and David Michael (vocals). After a 1994 demo recording as a 3 piece, bassist Michael Dargis was brought in to help record the band’s 1995 debut album. The self released debut received critical acclaim for keeping Bay Area Thrash relevant in the lean years of Grunge and Alternative Rock. The album licensed by Crazy Life/ Shark records was released in Europe the following year. Imagika spent the next 2 years on regional touring and the writing of their sophomore album “Worship”. Through their hard work, touring and promotion the band had come in contact with Chris Boltendahl’s then promotional company Flying Dolphin who assisted in securing distribution through Nuclear Blast/Indigo for the 1998 release of the album. Imagika then went on to complete their 1st European tour in support of Grave Digger and Iron Savior in 1999. Not slowing down the band began to record their next anticipated release "...And So It Burns" which was released the following year supported by a licensing deal with Massacre Records. By the time of release bassist Michael Dargis had left the band eventually being replaced by Elena Luciano. The unfortunate timing quelled any touring activity but saw the first ever US release of any Imagika album through the now defunct WW3 records in 2000. The band was able to follow-up the US release with touring and festival dates helping to solidify the band's footprint in North America. The next 4 years were tough and again things would change with founding member David Michael leaving the band to pursue other musical endeavors. Luckily Imagika was able to recruit vocalist Norman Skinner quickly and the writing and recording continued on the group's 4th effort “Devils on Both Sides” which was later released through Mausoleum Records in 2004. "Devils on Both Sides" once again showed a leap in growth and evolving style. Norman's vocal versatility allowed the band to write more diverse and challenging material. The refreshing change was rewarded with some of the bands best reviews to that point. The band re-energized with new ideas wrote and recorded the next album “My Bloodied Wings” the following year and this time around utilized the production talents of King Diamond guitarist Andy LaRocque which would be the beginning of a long term partnership between the legendary guitarist and Imagika. The band's 5th album was released by Crash in the US, followed up by a European release through Sleazy Rider Records. Imagika's success continued to grow with their 2008 release “Feast For The Hated" delivering another solid recording containing a perfect blend of Power & Thrash while keeping the right amount of melody. The album released through Locomotive Records shot to number 3 and went Top 15 on CMJ and FMQB’s metal charts and stayed Top 20 respectivaly for 4 weeks. Unfortunately shortly after the release of "feast For The Hated" long time bassist Elena Luciano would leave the band to concentrate on her family. New bassist Jim Pegram would now join the Imagika ranks. With a new line-up solidified the band spent the rest of the year supporting their 6th release with a North American tour and festival appearances. Always moving forward while not touring the band continued writing for their next release and very soon entered Fang Studios to begin tracking follow-up by a return trip to Sonic Train Studios in Sweden. With Andy LaRocque again leading the production and supplying a fantastic lead guest guitar track for the instrumental "A God No More", Imagika's 7th full studio album "Portrait of a Hanged Man" was released worldwide in 2010 via Metalville Records. On the heels of another very successful album release the band would find themselves faced with yet another line-up change, this time parting ways with founding member drummer Henry Moreno. With a pending tour and festival appearances in the works a replacement needed to be secured. Drummer Wayne Devecchi was recruited and the group spent the summer touring extensively before returning home to begin writing for their next album. It was at this time Vocalist Norman Skinner announced to the group his intentions to pursue other musical projects. In October of 2010 Imagika performed their final show supporting Armored Saint before Norman exited the band. After 7 successful albums, countless tours and festival appearances sole founding member Steven Rice made the tough decision to put Imagika to rest and went on to form the very popular Metal band Kill Ritual. Norman Skinner formed the popular Power Metal band Niviane and teamed up with members of Cage to form the band Hellscream. He also began performing solo under his surname Skinner. During this time Jim Pegram continued on performing in many local and regional acts as well as joining Steve for a period of time in Kill Ritual and Norman's solo outfit Skinner. Fast forward almost 10 years... during a chance encounter architected by bassist Jim Pegram during Kill Ritual's tour supporting Iced Earth & Sanctuary the Imagika alumni shared past stories, way too many drinks and ultimately agreed it was time to give the fans what they had been requesting for so many years. Steve already had many songs ready to go and having previously worked with King Diamond drummer Matt Thompson brought him into the fold to record the drums for this comeback album. The new album came together very quickly within a couple months Norman wrote and recorded all his vocals followed up by Jim laying the final bass tracks. As with Imagika albums past the group handed off the recordings to Andy LaRocque to produce and engineer. The forthcoming album titled "Only Dark Hearts Survive" showcases a maturity to the group's songwriting but holds the same core sound that Imagika fans will be happy to hear once again.

After 10 years Imagika is back! The most successful lineup of the band with guitarist Steven D. Rice (Kill Ritual, Imagika), vocalist Norman Skinner (Skinner, Niviane, Hellscream, Imagika), bassist Jim Pegram (Mudface, Angerhead, Imagika) and guest drummer Matt Thompson (King Diamond) have recorded a blistering new CD that is a modern take on where the band left off in 2009.Their new 8 track effort mixed and mastered by Andy La Rocque at Sonic Train Studios is a testament to the bands overlooked talent and is scheduled to be released on September 13th, 2019, via Dissonance Productions.The band’s first ever video was shot in March with Mike Sloat (Testament, Machine Head, Lynyrd Skynyrd) for the track “The Spiteful One” at the infamous Sound Wave Studios in Oakland, CA. A lyric video for the title track “Only Dark Hearts Survive” will drop as the first introduction to the new album.Imagika guitarist Steven D. Rice comments on the rebirth of the band:“While on the Kill Ritual tour (with Iced Earth and Sanctuary) we made a stop in Sacramento, CA. which is not far from the SF Bay Area and where all the past members live so Jim and Norm made it out for the show. Jim played with Kill Ritual that night (as he did on the European tour the year before) and Norm caught the performance. I hadn’t seen Norm in years so we drank a few (ok a lot!), bullshitted, caught up on life and had a nice reconnect. Fast forward a few months later. As I was writing the new Kill Ritual record I would have material hanging around that didn’t quite fit the KR style or direction and that with some older ideas from the past I said to myself "Wow this really has an Imagika direction to the material", so I ran a couple ideas past Norm and he gave it his spin and before we knew it we had an album composed and ready to go. After bringing in Jim, who’s been pushing for this for years in on bass along with a guest appearance by Matt Thompson (King Diamond) to play drums it sounded great. I’m a firm believer in always moving forward and never looking back, but I’ll have to eat my words on the "Never Again" and just say it was meant to be! The new songs are definitely Imagika in 2019 with tight riffs, concise arrangements; hook laden vocals and great grooves! I think our old and hopefully new fans will absolutely love this CD. We can’t wait for you all to hear it!”...