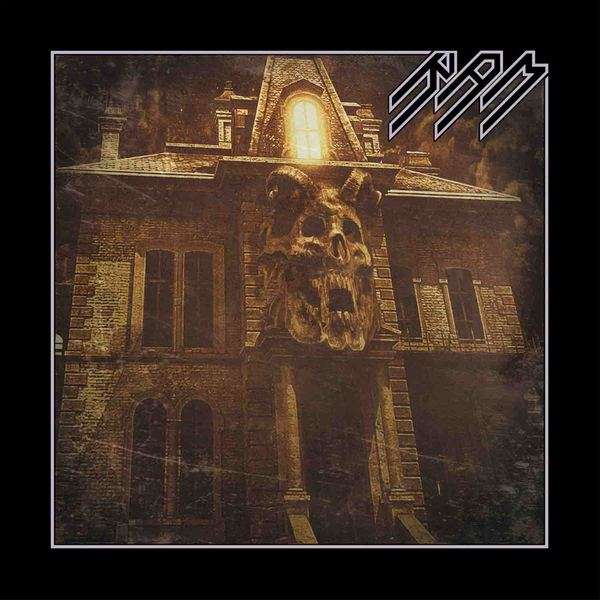 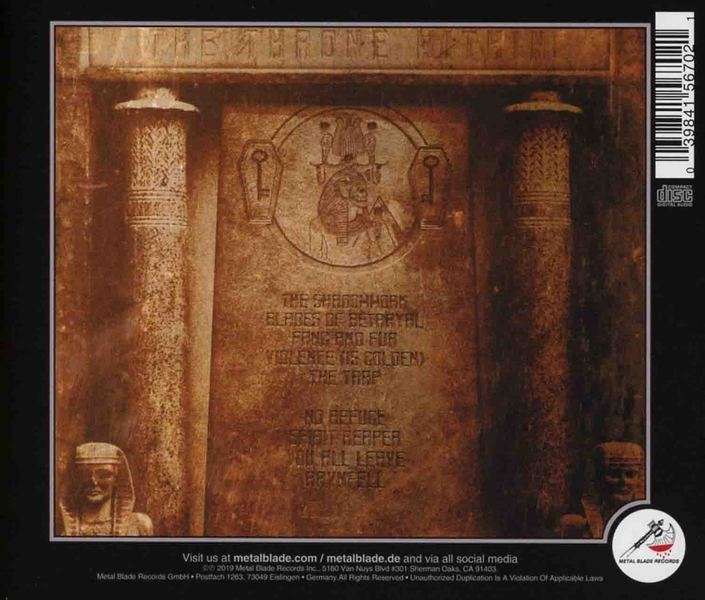 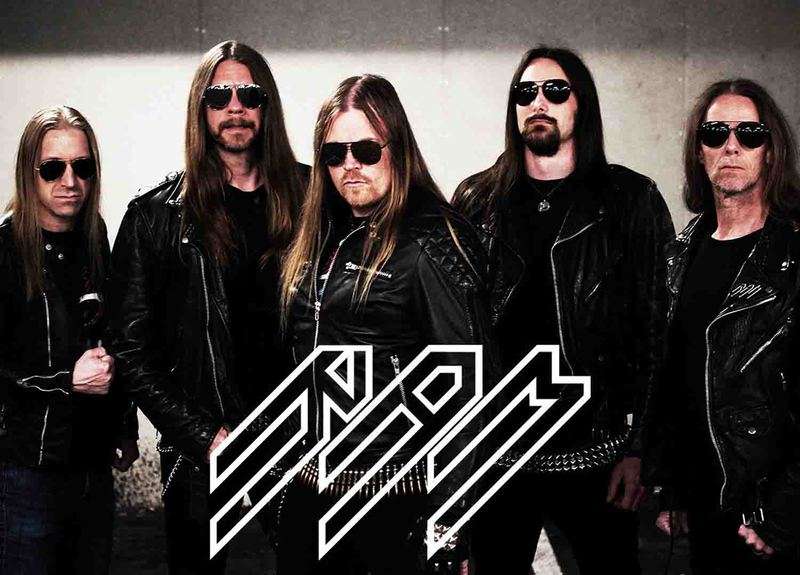 RAM was created back in '99 by Harry Granroth, who wanted to form a real heavy metal band; he was sick of the misinterpretation of metal that ruled the scene back then and had a pile of material that he wanted to bring to life. He soon found Daniel Johansson, a young but experienced and very talented guitar player who welded a traditional metal guitar style. The two started working on some of Harry's earlier material and began to write new songs. After a long and tiresome search, Harry then found Oscar Carlquist; a powerful heavy metal vocalist with a mutual hatred for the current metal scene. Oscar quickly became involved in the song writing process and quickly crafted interesting lyrics to accompany the music. The backbone of RAM was formed. Oscar brought in drummer Morgan Pettersson, one of the few drummers left who still played the 70/80's hard and heavy drumming style. They then recruited the legendary Leif Larsson, an icon in Gothenburg metal as he had previously been a member of "Frozen Eyes".The five members started to rehearse and write new songs and in 2003 they released their first E.P., Sudden Impact, through partly their own label "Black Path Metal Recordings". The EP created a sudden impact on the underground metal scene, the first 1000 copies were sold out in a few months. RAM hit the road and played a number of festivals in Europe and went on tour as support for Sebastian Bach. The band was also recognised by Germany's Rock Hard magazine as one of the best newcomers of 2004.RAM kept on playing live throughout most of '05 and started working on their full-length debut album Forced Entry, which was released in late 2005. Forced Entry brought the entire old school heavy metal community to its knees. The album is a pure sonic attack of real and innovative heavy metal. Great reviews followed and the band grew even bigger. In December '05, RAM hit the road with Dark Tranquillity and in Jan '06 they performed at several Scandinavian shows with Gamma Ray.Playing live is what RAM does best and in 2006-2007, the band delivered a devastating metal crusade over Europe. Reaching places such as Greece for the first time and Spain for the second time, the Teutonic hordes went wild. In the summer of 2007, bass player Leif Larsson was asked to leave the band due to personal differences and Tyrant of the Black Metal ultra cult act Nifelheim answered the call and joined RAM as a session bassplayer.In 2008, the band returned to the studio with producer Johan Reivén to record the album Lightbringer. This time they really took the time to explore the true heavy metal sound. The recording of the album took 10 months of nothing but strife for pure heavy metal perfection.In 2009, RAM signed a deal with AFM records and released Lightbringer, which received very good reviews. It landed a spot as one of the best albums of 2009 in Sweden Rock magazine. The band also headed out on headline European tour to promote the album. Tobbe Petterson joined the band and through his amazing bass skills made this the strongest RAM lineup ever.In 2010, RAM began recording their 3rd full-length album entitled "Death". The album was produced by Per Stålberg and Olle Björk. In 2011 they signed a world wide deal with widely renown metal label "Metal Blade Records" and Death was released in January 2012 once again great reviews followed. RAM hit the road in support of "Death" returning to Spain and Tyrannyzing Portugal for the first time, of course Germany was visited and some Swedish stages were betrodden. In June 2013 Daniel Johansson decided to quit the band due to personal reasons. Daniel was quickly replaced by guitarist Martin Jonsson from Gothenburg. On the 13th of September 2013 RAM celebrated the 10th anniversary of the release of the "Sudden Impact" E.P with a special concert in Gothenburg. RAM are now preparing for another 10 years upon the throne of underground Heavy Metal!

To admit that I have never been sure about something in my entire, would be false. However, I can add another good reason for my utter commitment for Heavy Metal music, another motivational gesture to further push me deeper into the well of the metallic elixir. Call me a purist, which I am not really as it is hard to be just in one place in Metal music, as it is so vast, like a universe class giant, however, I usually get those motivational pounds from Traditional Metal bands. This time it happened with the brand new old school Metal release of “The Throne Within”, via Metal Blade Records, by the Swedish Heavy Metal merchants, RAM. It is also my first time reviewing them, at least from what I can remember.RAM have always been loyal to the old flame, determinant protectors of the old guard of Heavy Metal music. Their music and appearance of spikes and studs, scream to the era of 80s like a banshee, unleashing a massive attack of tribute, in the name of the heydays. “The Throne Within” is no different in their line of albums, swaying between mystifying oblivion, treading in emotive fields and even tasting the tip of the blade in epic tales of lost times.Sinking deeper, it is evident that RAM have been bound by the magic that has been spread by British and German Metal indications. In the left corner, there is the reference of the mighty British Metal juggernaut, JUDAS PRIEST, in particular the band’s mid to late 80s discography, favoring the cross of vibes between “Screaming For Vengeance”, “Defenders Of The Faith” and “Ram It Down”. It is hard to deny the similarities with RAM’s sound pattern, which is addictive as hell. RAM’s lead guitar section is decisive, melting with a dedication to the classics, portraying an amazing atmosphere that would make your skin crawl at times. Furthermore, the vocals of Oscar Carlquist can easily be rendered as a rough version of Rob Halford, yet the roughness really did well here.In the right corner, there is also much respect towards the Teutonic Terror of veteran German ACCEPT. As for ACCEPT, I noticed hints of the band’s classic years, converging mainly under the clout of “Balls To The Wall” and “Russian Roulette”. RAM’s attention to the heavy barrage of rhythm guitar riffs, unchaining cracking nostalgia, penetrating deep inside your ears, similar to the Germans. Riff mongers would really take pleasure in those.Generally, the power surge of the RAM’s riffery, energetic drumming and sharp as an axe vocals, are a pleasure to listen to, it would be hard not to be caught by the steel web of the Swedes. On that note, the quality of the music entails the strength of the songwriting, producing both ends of the table, catchy tunes that are easy to market alongside epic and constructive tunes that share also fine melodies and memorable moments, yet a tad more complex in nature. The straightforwardness and memorability of the “The Trap” won me over, a spectacular performance, with the main riff and chorus demolishing every obstacle in their path. “You All Leave”, on the other hand, is like a lost balladry gem that JUDAS PRIEST never wrote, and should have. RAM made a long live power ballad, emotional and grasping. “Blades Of Betrayal” is a sonic seducer, no wonder it was chosen to lead as a single for the album, melodic and equally forbidding with its riffing, a vibrant charge with a lot to prove. Reminded me somewhat of “Freewheel Burning” for some reason. Other tunes to watch out closely: “Spirit Reaper”, “Ravnfell” and “No Refuge”.I have been asking on several interviews that I made about the existence of the term Metal Gods, and is it even relevant nowadays. I never really got a straight answer to that, as some said this and some that. Concerning RAM, continuing in the same direction of greatness, may get them closer to the throne. Maybe the crown is to be placed on a Swedish band, and not necessarily SABATON?