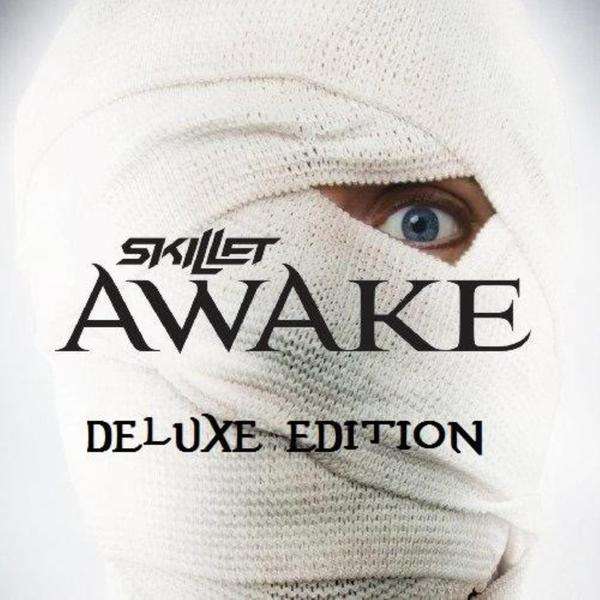 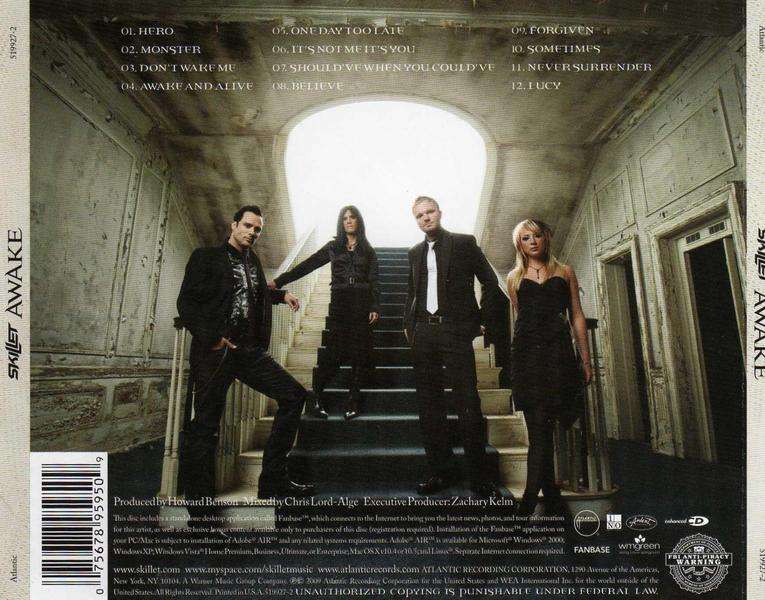 Awake is the seventh studio album by American Christian rock band Skillet. It is the follow-up to their Grammy-nominated album Comatose. The album was released August 25, 2009 by Lava Records, Ardent Records and Atlantic Records and debuted at No. 2 on the Billboard 200.The album was certified gold by the Recording Industry Association of America (RIAA) on July 27, 2010, and has since gone double platinum, selling over 2,000,000 copies to date.It was nominated for Top Christian Album at the Billboard Music Awards 2011 and won.This is the last album to feature guitarist Ben Kasica and the first studio release to feature drummer Jen Ledger. The singles "Awake and Alive" and "Hero" are certified Platinum, while "Monster" reached Double-Platinum status. Skillet began recording for the album around October 2008.The band recorded at Bay7 Studios in Los Angeles, California, with Howard Benson as the band's producer.The album contains 12 songs.Lead singer John Cooper wrote more than 40 songs in preparation.He said that there was much pressure while recording the album: "Every time you do a record, there's pressure because you want to outdo the last record. This time it was intensified because the last project was so successful."“We’re living in hard times right now between the news that seems to get crazier every day and all the uncertainty throughout society in general,” says Cooper. “Sometimes it doesn’t seem like there’s hope, and sure you can choose to give up, but why not face it ‘Awake and Alive’? Life is full of challenges, and sometimes when you look deep into yourself, you can feel weighed down by sin and the ‘Monster’ that lives inside us all. But the more you realize your need for Christ, the less you focus on that, and on Him instead. Everything we sing about on this album is something someone can relate to, and if anything, the songs will let you know you are not alone.” According to band members, the album is similar to their 2006 release Comatose, featuring strings and guitars with a harder rock sound than their previous album.John Cooper said that it "sounds like Skillet with some new things people may not expect." On Skillet's website, they describe their musical style as "Classic rock riffs, swirling drums, monstrous hooks, and undeniably catchy choruses... hints of old school progressive rock mixed in with modern alternative flourishes... touches of classical influence as swelling strings intersect with sonic adrenaline rushes.The band finished the first leg of their Awake and Alive Tour in support of Awake, which opened on September 24, 2009 in Fort Wayne, Indiana and encompassing 52 cities between September and December. They were accompanied by The Letter Black, Decyfer Down, and Hawk Nelson on the tour.The band recently finished the second leg of the tour with RED and The Letter Black in April.They also toured with tobyMac and House of Heroes on the Awake Tonight Tour in March and April, and will resume the tour in November and December.Awake was released on August 25, 2009, through Lava/INO Records,and debuted at No. 2 on the national U.S. Billboard 200 chart.It also placed on other Billboard magazine charts as No. 1 on Top Alternative Albums, No. 2 on Top Rock Albums, and No. 1 on the Top Christian Albums listing.The album sold 68,000 copies in its first week, Skillet's best-selling and highest charting opening week to date.In 2009, Awake tied Underoath's Define The Great Line, and Casting Crowns's The Altar and the Door for the highest charting Christian rock album on the Billboard 200, debuting at No. 2.The song "Awake and Alive" also charted on the Billboard Hot 100 at No. 100 and No. 16 on the Heatseakers charts. It was Skillet's first song to chart on the Hot 100.The song was released to Christian CHR and rock radio in February 2010."Monster" and "Hero" were used on the soundtrack of the WWE SmackDown vs. Raw 2010 video game, with "Monster" also being used for 2009's WWE Hell in a Cell PPV and "Hero" being used for the 2009 Tribute to the Troops show and 2010's Royal Rumble pay-per-view.The Cleveland, Ohio AHL hockey team Lake Erie Monsters use "Monster" for their goal song and game-opener,the AHL hockey team Portland Pirates also use "Hero" for their game opener before the team skates onto the ice.