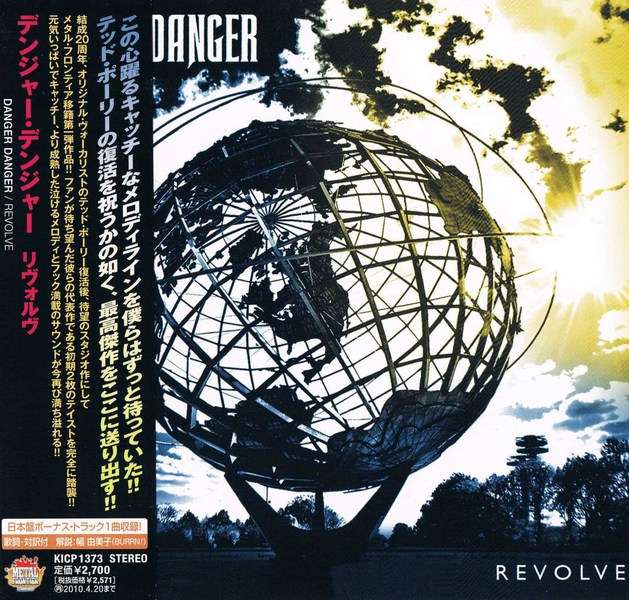 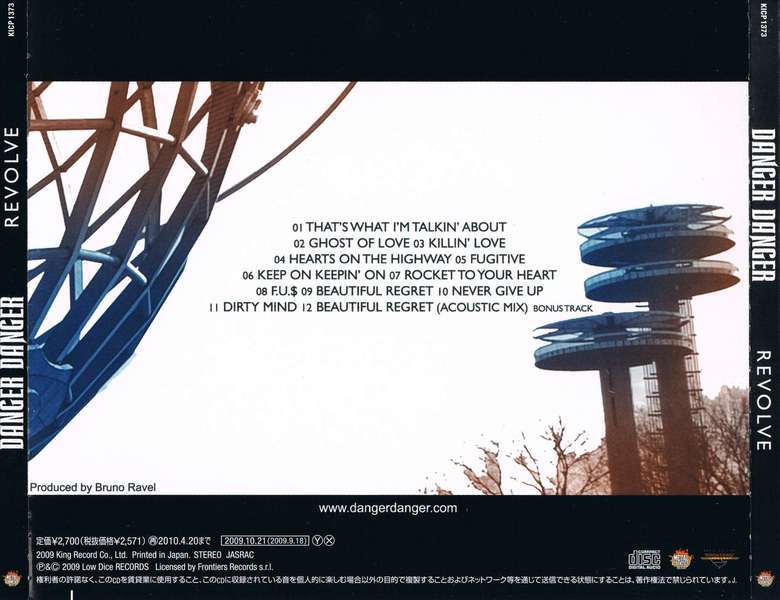 Danger Danger is an American hard rock band, formed in 1987 in Queens, New York. Despite enjoying moderate success in the U.S. with their debut album Danger Danger, the band vanished from the radar due to legal problems and changes in its line-up.Danger Danger was formed in 1987 by former Hotshot members lead vocalist Mike Pont, bassist Bruno Ravel, and drummer Steve West. This line-up also featured then future Hotshot guitarist Al Pitrelli and former Get With It keyboardist Kasey Smith. Mike Pont later left the band and was replaced by Ted Poley, who previously played in the band Prophet as drummer, and sometimes lead vocalist. Somewhere during this time, they made an attempt at recording a demo, but failed.They made another attempt at recording a demo, and this time it landed them a recording contract with Epic Records. In 1988, Pitrelli left Danger Danger. Shortly after, Pont and Pitrelli reunited to form a new line-up of Hotshot. Since then, Pitrelli has played in various other bands. Pitrelli played on most of the Danger Danger compilation album Rare Cuts.In 1989, Saraya guitarist Tony "Bruno" Rey joined briefly and played on part of their debut album, before returning to his previous band. Andy Timmons replaced him and played on the rest of their debut album, which was released in the same year. The album spawned two hits with “Naughty Naughty” and “Bang Bang,” with the former gaining a spot in MTV’s Headbanger’s Ball. The band went on tour opening for KISS, Alice Cooper, Extreme and Warrant.After that, the band went on to record their follow-up in Florida, releasing Screw It! in 1991. The album spawned two other hits with “Monkey Business” and “I Still Think About You” and again they went on tour with KISS. After the tour, Kasey Smith left the band.In 1993, the band had finished work with their third album titled Cockroach. However, the band fired singer Poley. Subsequent lawsuits from Poley prevented the album from being released. In the meantime, Paul Laine was hired by Ravel and West as the new singer and he re-recorded the vocals for the new album. Still, when they were about to release it, Epic thought it was in their best interest to shelve the record. Shortly after, the band and the label parted ways. In addition, guitarist Timmons left the band to pursue a solo career. Since then, Timmons played guitar on both of Kip Winger's solo albums.Ravel and West went on to form their own label, Low Dice Records, and they started working on a new album together with Laine. They finally released Dawn in 1995 which featured a more somber and introspective tone. The album was partly marketed through the band’s fan club, newsletter and website. The band recruited bassist Scott Brown, who had previously played with Paul Laine as a solo artist, and they went on tour again in the U.S..The band went back in the studio and released Four the Hard Way in 1998. Former band members Andy Timmons and Kasey Smith contributed to the album, and the band went back on tour. In 2000, they released The Return of the Great Gildersleeves.In 2001, the band made a unique move after talks with Epic, releasing Cockroach, which was supposed to be their third album, but could not be released for legal issues. The album featured two discs with both versions of the album, one with Laine on vocals and the other with Ted Poley. In 2002 the song "Naughty Naughty Christmas" was featured in the Tim Allen movie The Santa Clause 2. They followed Cockroach with Rare Cuts in 2003, a collection of unreleased and rare tracks including early demos with original member Pitrelli, now playing with Megadeth and Trans-Siberian Orchestra, and recorded in his mother's laundry room. In 2004, Laine left the band and original singer Poley returned. However, a 2005 release, Live and Nude, which was recorded in 2003 featured Laine.In 2008, rock and roll comic C.C. Banana recorded a song called "Ted Poley," released on the album Kiss My Ankh. The song is a parody of the Kiss song "Unholy," inspired by the story of Poley's first encounter with Kiss lead singer Paul Stanley.On September 19, 2009, the independent label Frontiers Records released Revolve, featuring the return of Poley as lead singer, as well as new member, guitarist Rob Marcello.The album coincided with the 20th anniversary of their debut release for Imagine Records.

Revolve, Danger Danger's seventh studio album, marks the return of lead vocalist Ted Poley. It is also the first Danger Danger studio album to feature Rob Marcello on guitar. I’ve been looking forward to the new DANGER DANGER album for a while as they are not only one of my favorites from back in the day but also because vocalist Ted Poley is back in the mix. Not only does the band have a history of writing a catchy tune but Poley has that unmistakable vocal that is pretty much quintessential in this genre.“Revolve” opens with “ That’s What I’m Talking About”, and when I first heard the title I thought it would be another one of those signature “tongue-in-cheek” rockers from the band that they’ve written countless times before. But the song is really more “mature” sounding with its classy arrangement and delivery. The song is similar to some of the finer Ted Poley solo material and a solid AOR-styled opener.“Ghost of Love” opens with some fine guitar sounds from Rob Marcello and leads right into a prime melodic rocker. This is classy, first-rate DANGER DANGER and Poley turns in his usual impressive vocal. I’ve seen the band in concert a few times over the last several years and I knew Marcello was a talented player but his tone on the record is just awesome.“Killin’ Love” is a moody, mid-tempo tune with another fine vocal performance and some nice underlying keyboards. I said it earlier but this is definitely a more refined sound from the band and one I like a lot. I alluded to this in my review of the POLEY/RIVERA “Only Human” release and that is, that I think Poley has a voice that is suited to classy, melodic rock and with the strong writing pedigree of DANGER DANGER it makes for a strong release so far.“Hearts On Fire” is another vintage and anthem-like tune from the band that has had a knack for writing those types of tunes in its history. Poley handles these types of tunes with a special conviction that only he has. You’ll be singing along to the chorus in no time on this one.“Fugitive” gives us the first ballad of the record and again Poley has the voice for these types of tunes but this ballad maybe doesn’t quite measure up to the emotional quality of past DANGER DANGER ballads. It’s a little paint-by-numbers if you ask me.Next up is “Keep On Keepin’ On”. The song is more along the lines of the “care free” attitude that some of the earlier DANGER DANGER material had. A little basic in the lyric department but a fun song to blast with the windows down in the summer of 1989! If only we could step back in time!“Rocket To Your Heart” is another one of those new mature sounding DD tunes which actually has a very modern and current sounding feel and at times the arrangement and underlying sounds reminded me of… ready for this… COLDPLAY! Now don’t worry as DANGER DANGER hasn’t gone of and went alternative at all. The song is a mega-melodic tune but with an overall more mature (that word again, I know) and updated sound. The song is still rooted in the melodic AOR genre and this sound suits the band very well.“F.U.$.” is very DEF LEPPARD sounding but the lyrics, although they make you smirk, are a little much and the song is the type I always felt the band could do without. Although it’s wrapped up in a decent arrangement the song just wont go down as a favorite for me.“Beautiful Regret” brings the record back up to speed and again sounds like something I could hear coming off a Ted Poley solo record.The second ballad of the record comes in the form of “Never Give Up” and this one is more along the lines of the DANGER DANGER ballad sound we all know and love. Poley turns in another top-notch performance on this one and you get a tasteful solo from Marcello to top things off.The record is rounded out with “Dirty Mind” and as the opening chords struck I thought I was hearing a cover of the WHO classic “Baba O’Riley”! That thought was quickly put to rest though as the tune turned into another melodic AOR rocker with catchy chorus.As mentioned more than a couple times, this is a more updated and mature sound from the band and I guess if consider it’s been 16 years since they last recorded with Ted Poley in tow it really makes sense. It’s definitely a welcome return for one of the more endearing bands of the genre and if not for a couple of songs that were off the mark for me, I would be including this one near the top half of my list of albums of the year. Welcome back boys, now let’s get to some more extensive touring on U.S. soil and things will really be great!