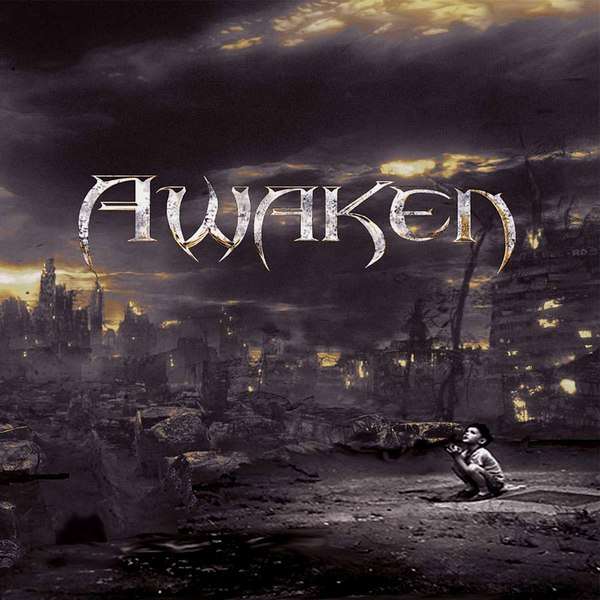 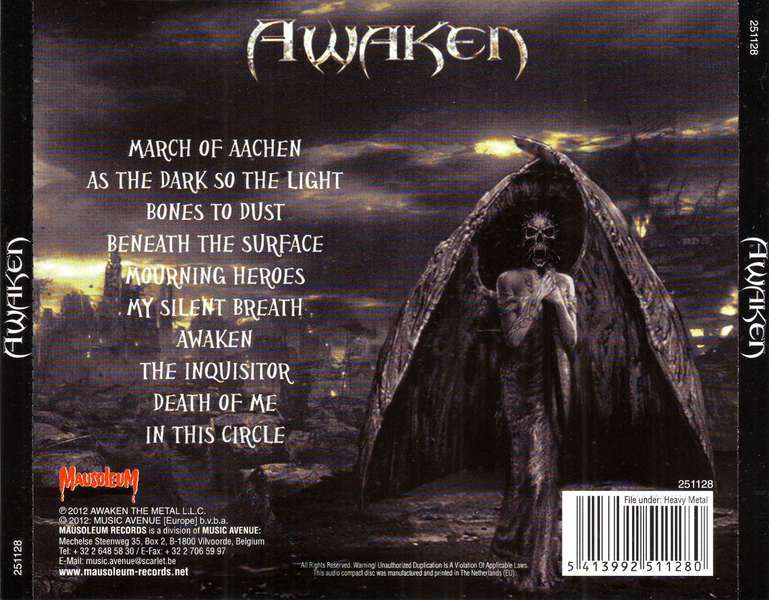 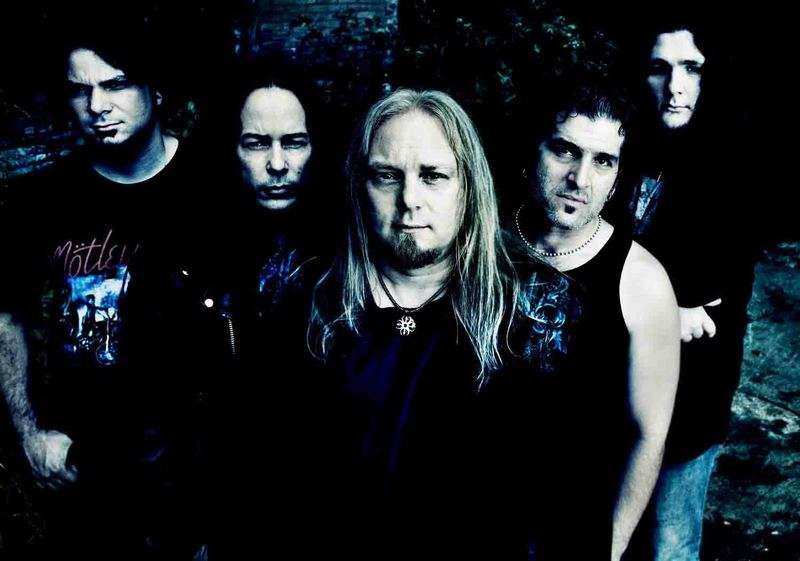 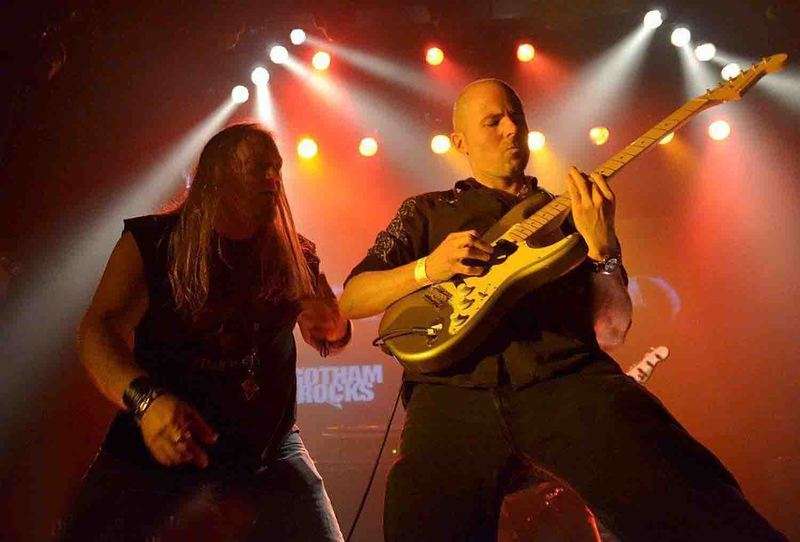 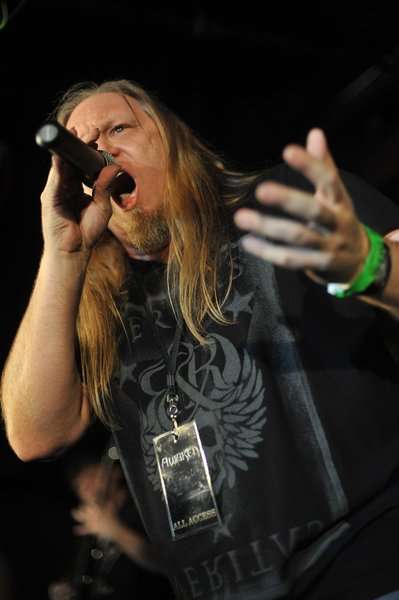 Awaken is a heavy metal band from Greenwich, CT formed in 2009 by vocalist Glenn DaGrossa. He was formerly the songwriter and founding member of the power metal band Lazarus, which Kerrang! magazine hailed as "one of the quintessential metal bands of our time." Thanks to DaGrossa's soaring vocals and stellar song craftsmanship, Lazarus was also voted one of 2007's best unsigned bands by the staff at Germany's Heavy magazine and metalexpressradio.com said their 2007 debut, Episode One, "could have easily been sandwiched between Queensrÿche's The Warning and Saxon's Innocence Is No Excuse." In addition to DaGrossa (who has also written and recorded with jazz luminaries Ernie Adams, Marchin Fahmee, and Hernon Romero, to name but a few), Awaken features an all-star cast of veteran New York musicians:

With considerable national and international touring and recording experience under their collective belts, Awaken is primed for the world stage and ready to lead a new wave of traditional heavy metal. Awaken debuted last summer by honoring one of their heroes with a blistering rendition of "I Speed at Night" on Magic Circle Music's Magic - A Tribute to Ronnie James Dio. According to metalpsalter.com, "Awaken cranks out a slightly faster version that allows the twin guitars to actually sweeten up the riffs." This summer, Awaken plans to throw down the gauntlet when they unveil their self-titled debut album, Awaken.

Debut of the prog power metal band Awaken, formed in 2009 by Gleen DaGrossa, chief songwriter and vocalist of the indie power metal band Lazarus. He found some New York all stars to release that self-titled album that points first, if you take a look at it, with the fantastic endtime artwork.Hopefully the music can keep what the arwork promises.It starts with the „March of Aachen“. Exciting song assembling. Slow with some acoustic guitars that lead to a heavy hookline. An melodic and monumental instrumental with progressive elements.This early shows the know how of the musicians who worked before in bands like Quiet Riot, Lazarus, Holy Water or Widowmaker.„As the Light so the Dark“ as consequence therefore is the real opener. Straight guitar theme, lots of classic hard rock elements. DaGrossa owns a great voice that sounds a bit to the old classic hard rock bands like Deep Purple combined with 80’s US Metal bands. In the refrain the band often works with twin vocals. Summary a good start with a more straight than progressive song.Hardly blurred guitars at the beginning of „Bones to Dust“. The song structures remember a little to Queensryche in Operation Mindcrime times with a voice near to Rainbow in the 70’s. Good combination. Melodic but ambitious stuff. Awaken has not to hide behind the named bands cause the musical quality is high enough to get into their footsteps.„Beneath the Surface“ starts faster with a simple but effective riff. Both axemen, Joe Buddha and Scott Bennett, showing experience but for me the production of the guitars could have been better.Again a refrain to remember and that is what good hard rock bands decorates. Easily to sing with.Great rockin’ smasher, not too speedful but with enough power to throw it away from cheesiness.The next 7 ½ minutes belong to „Mourning Heroes“. Mystical, acoutic start, followed by a huge riff. Sometimes the song offers darker vibes, progressive structures in the guitar section, lots of breaks. Guitar solo duet and a longer instrumental part stands against the harmonies of the vocals in the refrain. A more progressive highlight of this album based on the strong hard rock roots.Balladesque moments now….“My silent breath“. Dreamful keyboards and acoustic guitars, clean vocals of DaGrossa that sometimes reaches the class of heavy weights like Glenn Hughes. A wonderul ballad that transports some tragic feelings.Back on track with „The Inquisitor“. Fast guitars line in the beginning, melodic vocals to follow.A hookline monster more progmetal orientated. Typical breaks like progmetal bands often use it. Played on high level, disharmonic elements in between. Great song with great vocals.And the album continues in direction darkness…“Death of me“. Guitars and vocals are arranging darker vibes than before. Not wondering cause of the songtitle. Basically a straight song, only interrupted by a short guitar solo.Another longer track follows with „In this Circle“. Straight guitar hookline together with pumping drums brings it more in heavy metal spheres. One of the hardest songs so far with straight vocals and short twin vocals refrain. Interrupted in the middle by a slower guitar part that again shows the knowledge of the guitarists. The vocals are not that present in this song….most time the instrumental.fraction does the talking.In the end it is time for….“Awaken“. A huge riff rotates with silent vocal parts. A bit of oriental touch in the guitar work. Later the song moves to a stadium rocker. Great melodies together with a brilliant refrain. Definetely a song written for the big stages. Eighest level of 80’s orientated US Hard Rock.With this self titled debut Awaken created an album in the tradition of the great hard rock bands we knew from the past or we know today. Together with some progressive elements and the brilliant voice of Glenn DaGrossa this album can be highly recommended to all who like melodic hard rock on highest level. Even those who are in progressive bands like Queensryche, Fates Warning or similiar should risk an ear to it.The only thing to criticize is the production. For me the drums are too much in the back and the guitars sometimes could sound a little cleaner. But we are talking about a debut album.We will definetely hear more about Awaken very soon. It would be a shame if not….