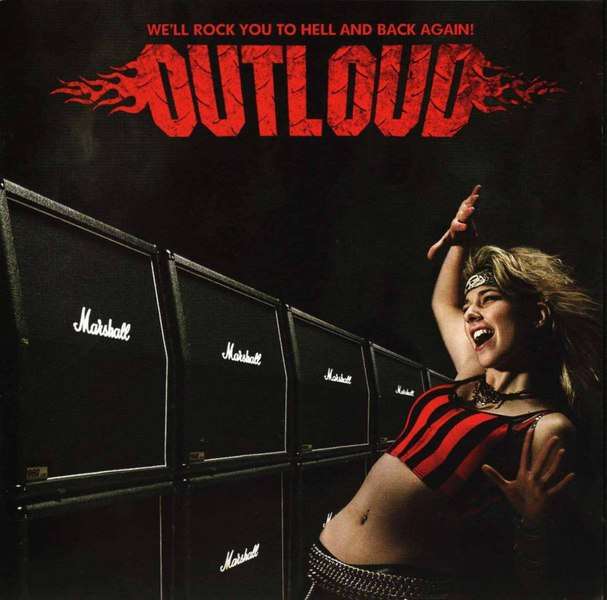 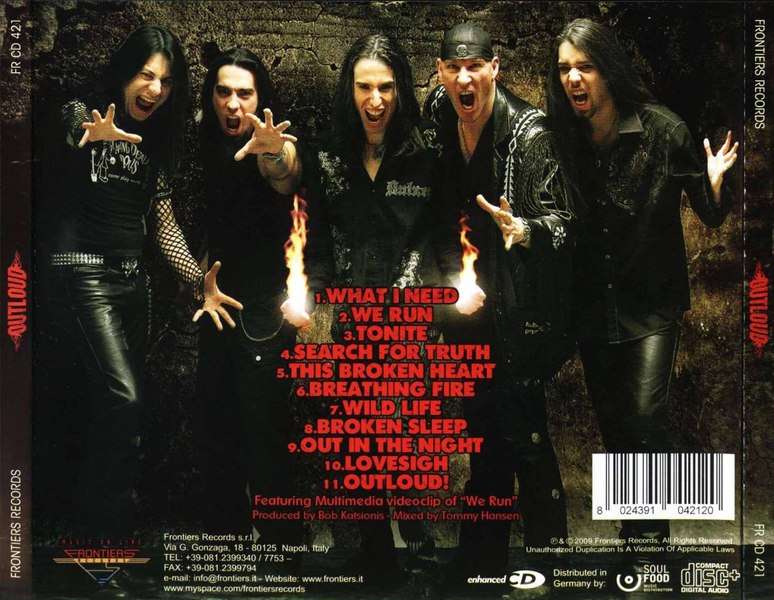 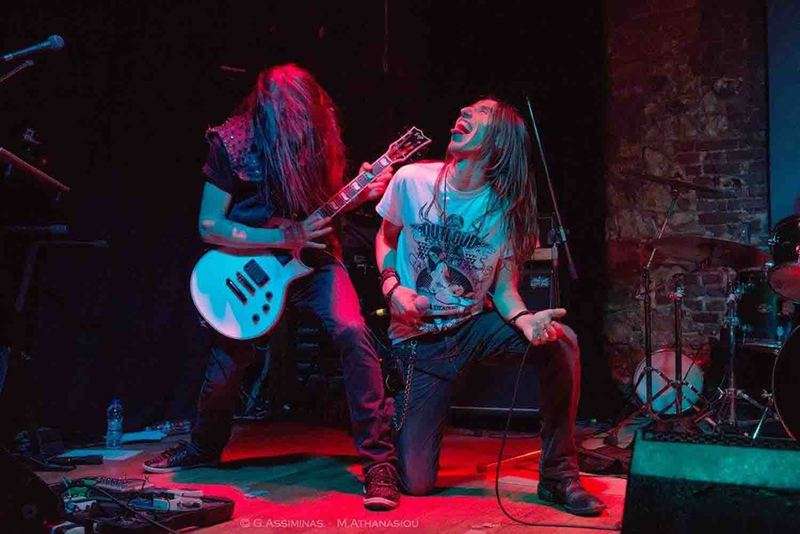 OUTLOUD began with Greek guitar player Tony Kash taking lessons from Firewind's Bob Katsionis. They began to write songs together and in late 2007 / early 2008, started to solidify these ideas into an album format and eventually got in touch with NYC-based singer Chandler Mogel, who Bob had met previously on a Firewind tour of the States.Chandler was flown to Athens and Tony contracted his friend Jason Mercury to play bass, and in turn Bob brought on board Mark Cross, also from the band Firewind at the time, to play drums.The five of them started to jam over the existing ideas and added the final arrangements and finishing touch to Outloud’s music and in September 2008 the band entered Basement Studio in Athens and recorded their debut album. Mixed and mastered by none other than Tommy Hansen (Helloween, TNT, Pretty Maids), the album was described by the press as "a mixture of Riot’s Fire Down Under, Skid Row's debut album and TNT’s Tell No Tales with some Foreigner melodic elements."The album was released by Frontiers in August 2009 to rave reviews worldwide and ended up on many top ten lists by year's end, and the album was voted "Best Album of the Year" in BW&BK/Bravewords.com. Sverd T. Soth (Bare Infinity) replaced Jason Mercury on bass shortly after the release.Both video clips of their singles We Run and Tonite (2010), which together have since garnered well over 100,000 views on Youtube, were directed by Bob. "We Run" ranked #3 in Greek Metal Hammer's 2009 reader's polls in the BEST VIDEO CLIP category as well as being in regular rotation on MTV in Greece. It also ended up getting a spot on the esteemed German Metal Hammer Magazine DVD compilation. The song landed “Track of the Day” on Classic Rock Magazine’s website on June 26th, 2009, and was also included on a handful of notable CD compilations such as MelodicRock.com and Rock Hard.Outloud, having sold over 5,000 units of their debut CD worldwide, made a successful headline tour of Greece in December '09 (sponsored by Jack Daniels) and a companion national Greek TV appearance in front of more than 1 million viewers. 2010 saw the band playing more live shows in their native country and returning to the studio to record their sophomore album.The band inked a brand new deal with AOR Heaven for their second release, which was recorded in Athens, Greece during the summer of 2010 and once again produced by Bob and mixed and mastered by Tommy Hansen.The band released it's second effort, Love Catastrophe, in July of 2011. Much like it's predecessor, it was released to rave reviews from the press and was mixed and mastered by Tommy Hansen (Helloween, Pretty Maids, TNT). The band released a video for the single, Waiting For Your Love, opened for rock legends Twisted Sister in Athens during this time and the song "We Came To Rock" landed a spot on the July issue of Classic Rock presents AOR - Raised on Radio compilation. Additionally, the band was featured on the front cover of Greek Metal Hammer Magazine in August. As 2011 came to a close, the band was voted #4 "Best Greek Band" of the year in Greek Metal Hammer, and the band released via the internet a surprise single, an original Christmas song entitled "The Last Days of December".Now as 2012 begins, the band announces the release of More Catastrophe, a six-song EP which contains three brand new songs plus a few surprises. The EP will be available at their upcoming shows in Greece, as well as in stores and digitally across Europe via AOR Heaven. Says Chandler, "We wanted to give the fans a little something extra this time around. These songs pick up where the last album left off and at the same time serve as a road sign as to where we're going. Hopefully this will hold everyone over until the third album is ready, which we're currently beginning to work on."

2009 release from the melodic Hard Rockers.Outloud was formed in 2008 featuring Firewind members Bob Katsionis (keyboards, guitar) and Mark Cross (drums). However, the band's history dates back to 2004 in Athens, Greece when young Tony Kash started taking guitar lessons from Katsionis. Tony soon appeared to be a kid born to rock and was constantly coming up with some great riffs that led Bob to record those to demos, which turned out to be really good material with catchy tunes. A strong melodic voice was soon needed! Bob remembered someone he once met in New York during one of Firewind's US tours who seemed to be the right guy: Chandler Mogel, formerly of Talon. OUTLOUD is a brand new Greek-American melodic metal band with strong 80s influences. Clearly this collaboration is probably the biggest surprise in the genre of melodic Hard Rock-Metal for 2009 as it brings together some of the greatest musicians from the US and Greece; FIREWIND's Bob Katsionis (keys-guitars) and Mark Cross (drums) join forces with the voice of TALON Chandler Mogel. The line up is completed by Greek newcomers Tony Kash (guitars) and Jason Mercury (bass).The result is top notch melodic hard rock/metal with strong references to 80s.Clearly the release does not feature the flamboyant guitar work and aggressive rhythm section of FIREWIND yet it is nothing but full of the catchiest choruses and infectious melodies one can find in a release of this kind. Tracks like "Tonight", "We run" and "Breathing Fire" are prime examples of good time rock and party metal.As both FIREWIND and TALON are personal favorites it was pure excitement to find an album that brings to front such collaboration. This album is an absolute must for any fan of FIREWIND or TALON since the musicians live up to their reputation, capable of producing relevant output outside of the comfort zone of their original bands."Rockhard" Greek magazine (issue 45) marks this album with 8/10 commenting: "This is easily one of the best albums of 2009 for the genre of melodic metal"."Metal Hammer" Greek magazine (issue 297) also marks this album with 8/10 commenting: "The perfect soundtrack for your saturday night out!"