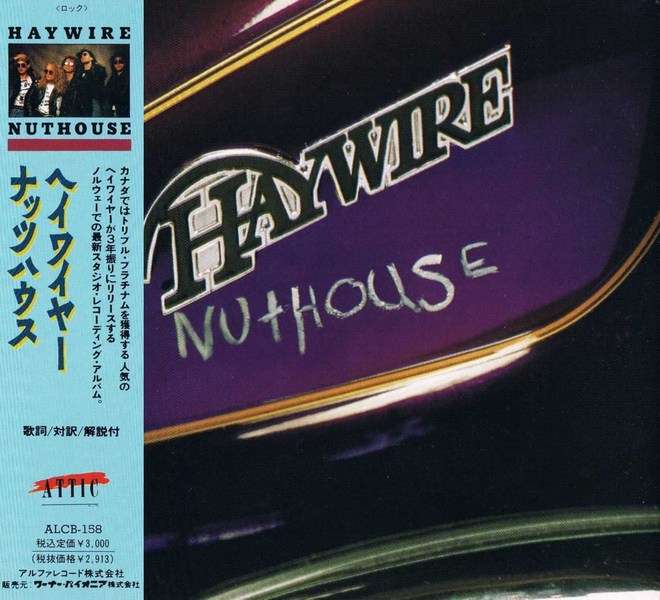 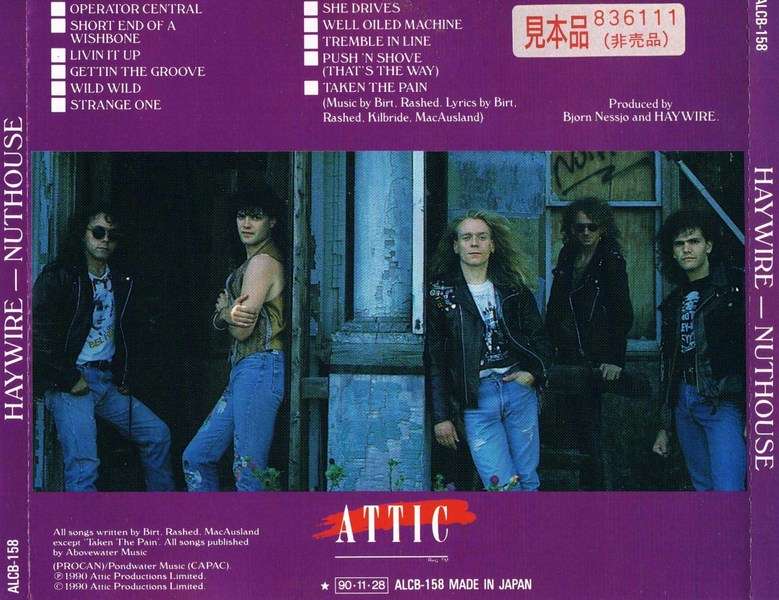 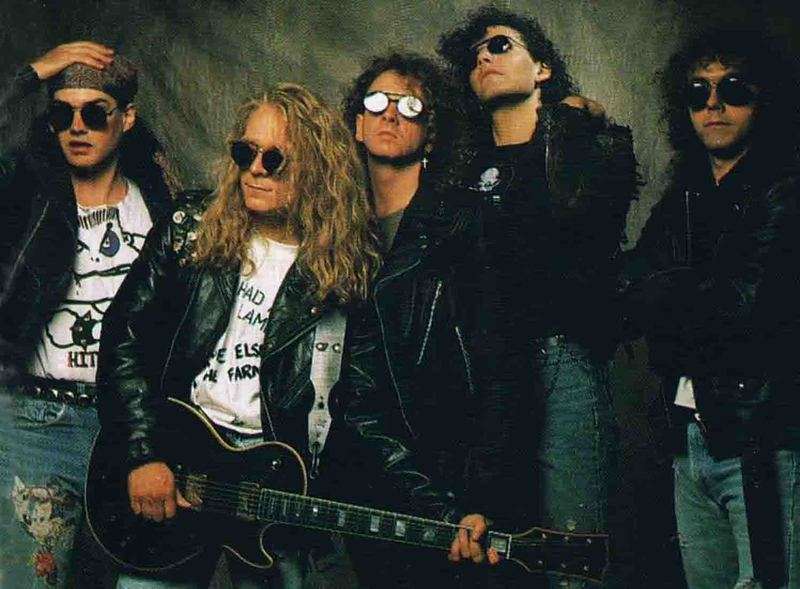 Haywire is a Canadian hard rock band originally from Charlottetown, Prince Edward Island,Canada.Haywire formed in Charlottetown in 1982 by Dave Rashed, Paul MacAusland, Marvin Birt, Scott Roberts and Ronnie Switzer. In 1984 they won the Q104 Homegrown Vol. 1 contest; the first prize was the chance to record a single, but they took the opportunity to invest their own money and record a 5-song EP, which eventually sold over 5000 copies in the Maritimes. In 1985 they won the Labatt's Battle of the Bands, and used the $10,000 first prize to record more material.While most of the members of the band had been unaltered from the start, drummer Sean Kilbride was the fourth drummer in the group's short history. Ron "Bumble" LeBlanc had replaced the original Haywire drummer Scott Roberts in 1984. He remained with the band through their demo stages, EP, and can be heard playing on two cuts of the band's first record with Attic. LeBlanc was replaced by Mac Cole when he decided to move on from the group and pursue a formal education. Cole only played two months with the band, when Haywire's long-time friend Kilbride became available for the job. In the summer of 1986 the group signed up Kilbride and successfully pursued a record contract with Attic.Their first full-length album, Bad Boys, went platinum in Canada, while the title track became a Top 40 hit. The following year, they released Don't Just Stand There, which also went platinum and contained their highest charting hit, the hard-driving "Dance Desire". A promised third video was not forthcoming from the label, so Haywire financed the video for "Fire" themselves. Although this showed great initiative and conviction by the group, this inexplicably did not please Attic. Throughout the late 1980s, Haywire toured with other popular Canadian rockers such as Helix, Honeymoon Suite and Kim Mitchell. They also represented Canada in the World Popular Song Festival in Japan, where "Dance Desire" won the award for best song. Despite their success in Canada, and interest Stateside from Doc McGee (Management for Bon Jovi, Mötley Crüe and Skid Row); Q-Prime; and Chrysalis Records, they were unable to secure a US recording contract due to unrealistic demands from their record company.The follow-up album, Nuthouse, was recorded in Norway with Bjorn Nessjo at the production helm; one of Europe's most sought-after producers at the time. Unsatisfied with the final mix of the album, Haywire flew back to Canada and remixed it themselves. The final result was guitar-driven, had a much harder edge and was the direction the band had always wanted to pursue, rather than the soft-rock/pop-rock pap their record label thought was necessary. The videos for the first two singles, "Short End of a Wishbone" & "Operator Central" were the most expensive Canadian videos produced that year. Although it hit platinum sales it was a major change in musical direction and as a result, alienated some of the younger fans they attracted with their first two offerings...while it did garner major AOR radioplay and was well-received, the record company wasn't willing to nurture & develop the new direction and following, and as a result Attic shelved the album without a third video as promised - again. They produced one more album, 1992's Get Off, which was critically well-received, but still did not fuel the support from the record company (financial and otherwise) that they needed. Haywire compromised, and had the first two videos made for the price of one with the label promising a third for the single "Buzz". Once again, Attic did not deliver. This was quite short-sighted as the single reached No. 13 without video support (their highest charter, second only to Dance Desire). After contractual struggles, the group refused to re-sign with their label Attic. To fulfill their contractual obligations with Haywire, Attic released a greatest hits CD in 1993 entitled Wired: Best of without input from Haywire themselves - short-sighted again, as the band would have added live recordings, unreleased material and many other things that are usually attributed with such a release.The band has had their albums re-issued on CD through Unidisc Music. In November 2006, Haywire were awarded the Music Prince Edward Island Lifetime Achievement Award.In 2011, Haywire were presented with the Dr. Helen Creighton 'Lifetime Achievement Award' from the East Coast Music Association (ECMA).In 2012, it has been announced that Haywire will be playing a special reunion show on June 9 at Fishbones Bar, in Charlottetown, PEI.

Nuthouse is the third full-length album from the Canadian band Haywire, released in 1990."Don't Just Stand There", the second album by the Canadian band HAYWIRE, established the quintet not only in their home country, but also internationally. In Canada, the boys have become superstars with their poppy hard rock, the aforementioned LP went platinum, and now they are trying to convince the last doubters of the band's qualities with "Nuthouse". The fact that this attempt is pretty good is probably mainly due to the abrupt change of style they have made. Away from catchy melodies and towards a harder, rock'n'roll instrumentation is the new motto, to which the former independence fell victim. Tracks like the driving 'Operator Central', 'Gettin' The Groove', which lives up to its title, or the ballad 'Taken The Pain' sound particularly original.The vocals are warrant all the way but musically they have a rockin sound.The guitars on "She Drives" remind me alot of Black Sabbath.The rest of the music is hair metal but for the most part it rocks. If you like Warrant,Lillian Axe ect.This is the band's rockiest album..a very good release but they have always been involved into the melodic/pop/AOR more than being an straight forward rock band so this one might be intereresting to have.."She Drives" & "Livin' It Up" are my faves ones but we have in here energetic songs such as "Operator Central","Short End Of A Wishbone","Wild Wild" a cool one,"Temble In Line" is ala Tesla(?!) and "Taken The Pain" that is a nice ballad...explendid band that gave us this album in order to let us know that they could also rock hard!.