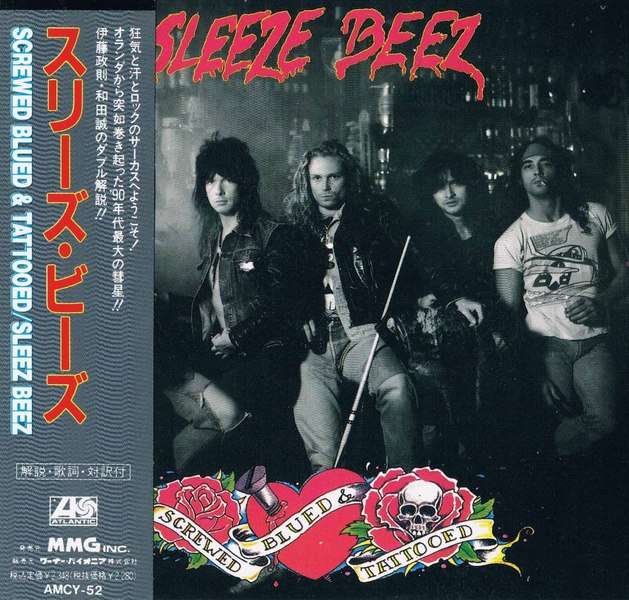 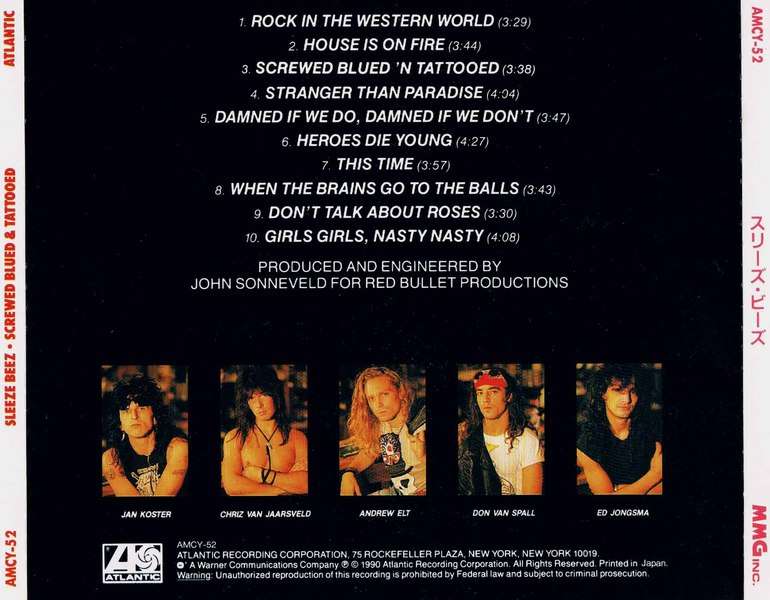 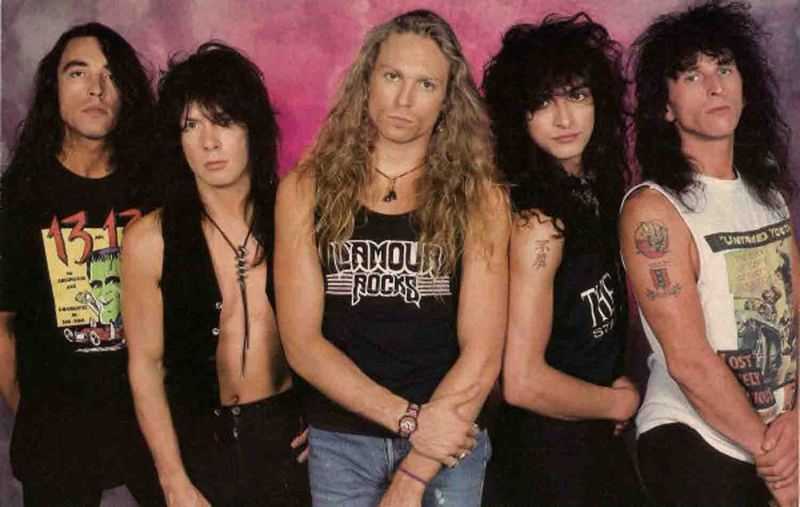 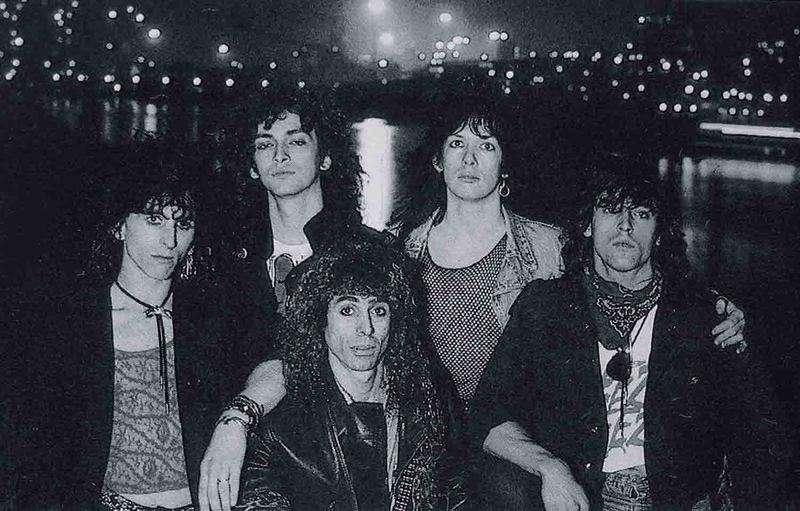 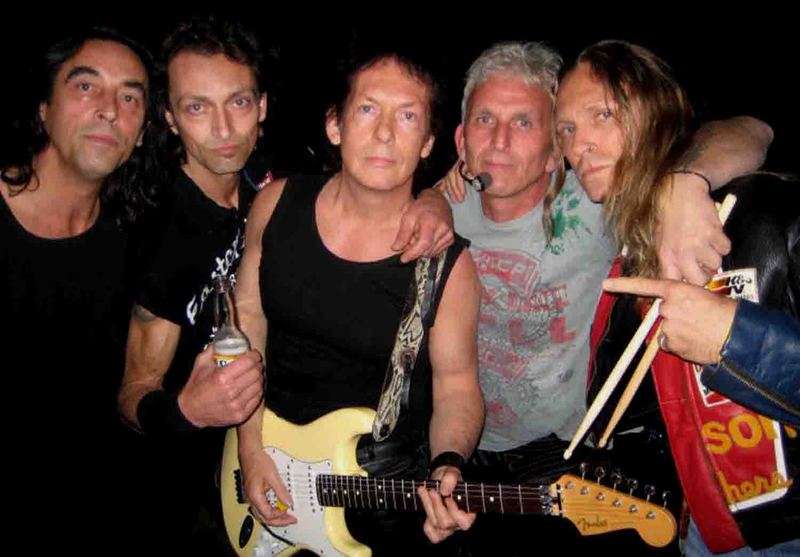 An appropriately named sleaze band, the Sleeze Beez managed to fuse the sounds of AC/DC and Def Leppard to create their own unrelenting brand of hard rock. “When The Brains Go To The Balls” will remain one of the best song titles by any group in this genre.Sleeze Beez photoIn a unique twist, Chriz Van Jaarsveld (guitar) and Jan Koster (drums) managed to talk their way into a record deal before a band (or many songs for that matter) was even formed. In order to start recording, a band was thrown together featuring Don Van Spall (guitar), Ed Jongsma (bass) and vocalist Tiger. The debut album Look Like Hell was only released regionally, but Sleeze Beez were beginning to make people take notice.During the recording of what would become Screwed Blued & Tattooed, front man Tiger was replaced by Andrew Elt and Sleeze Beez were poised for success. Atlantic Records snatched up the group, got the band considerable airplay for the single “Stranger Than Paradise” and had the boys opening for Skid Row. The album reached #115 on Billboard’s Top 200 and the future looked bright, but within two years the band had quickly fallen from grace.The band had another album in the can by the end of 1990, but lack of management and disagreements with the record company saw Powertool shelved for almost two full years. Of course by the time the record was finally released, bands like Sleeze Beez were becoming extinct thanks to a movement from Seattle. The album sank without a trace and the label quickly cut their losses and dropped the band. A final independent release and live album proved to be Sleeze Beez‘s last gasp, as the Sleeze Beez group photogroup disbanded in 1996. Elt and guitarist Don Van Spaal went on to form a new band called Moon which released a full length album entitled The Moon in 1999.After years of rumours that the band would get back together, Sleeze Beez finally reunited to play live for the first time in 15 years at a reunion kick off show at Lakei in Helmond, Holland on June 19, 2010 followed by a show at the Geiredome Stadium in Arnhem, Holland on June 23, 2010 sharing a bill with Aerosmith, Stone Temple Pilots and Steel Panther. A greatest hits album titled The Very Best Of Sleeze Beez along with a live album entitled Screwed Live! were released in 2010 before the band went back into obscurity in early 2011 just after recording their first song together since 1994, a cover of Journey‘s “Faithfully.”

Judging from the name, it's pretty easy to guess that Sleeze Beez is another band from the land of glam, only this time they're not from the famous Sunset Strip site, but hailing from the exotic Holland. After letting go their former singer, Sleeze Beez was back in business with a new recruit, Andrew Elt, and released "Screwed, Blued, & Tattooed" in 1990 which was cheered by many glam fans as one of the strong and underrated release of the 90s. Sleeze Beez played a heavily-influenced Def Leppard hard rock style with an ecstatic combination of American party rock twist of Kiss and Motley Crue."Rock In The Western World" and "House Is On Fire" are two blazing opener with a sharp chord and bold vocal. The title track, "Screwed, Blued, & Tattooed", blows a whirling bluster of glorious glam anthem. "Stranger Than Paradise" is a perfect melodic piece that should have done better in the chart. "This Time" is a delightful vintage ballad with a sugary tones and heavenly chorus. "Damned If We Do, Damned If We Don't" borrows heavily from Def Leppard's "High And Dry" era. "When The Brains Go To The Balls" is a weird exhilirating title but surely an excellent slab of lightning hard rock. This is a pleasing and sparks-flying album with a superb vocal and lethal guitar sweeps.Now let’s talk about this album with the bizarre name – a name which definitely didn’t help their case, in my opinion. But hey, it was the ’80s and it was all about fun, nihilism and doing whatever the hell you want! So let’s not fall into despair and just focus on the music, instead.sleeze beez“Screwed, Blued & Tattooed” is one of those albums which I say are “worth discovering” and definitely one of the exciting releases of the early 90s. From the opening powerful slap – “Rock in the Western World” to the playful wrap up song “Girls Girls, Nasty Nasty”, the album is one hell of an entertaining piece of hard rock music! Don’t get me wrong, the album is far from perfect or groundbreaking but with lively and highly amusing tracks like “House is on Fire”, “Damned If We Do, Damned If We Don’t” and of course the title song, I feel like I can totally forgive and forget. “Stranger Than Paradise” is unquestionably the finest moment on the album and definitely a song that had the potential to stand against any Bon Jovi, Winger, Great White or Poison song. After a couple of tracks, we finally get to the power ballad – “This Time”. It’s as good as any power ballad of the era, that’s all I have to say. If you are a power ballad enthusiast like me, then you will love it for sure! Check out the rest of the songs – “Heroes Die Young” and “Don’t Talk About Roses” are striking highly deserving rockers as well!Ultimately, Sleeze Beeze didn’t really predict the strong invasion of the alternative rock scene and their album was quickly forgotten. I can understand why, believe me – in addition to the bad timing, the album (was)is a total cliché. However, I am still recommending it because sometimes those partying non stop/sex/living the life clichés are the ones that help us go through the day.