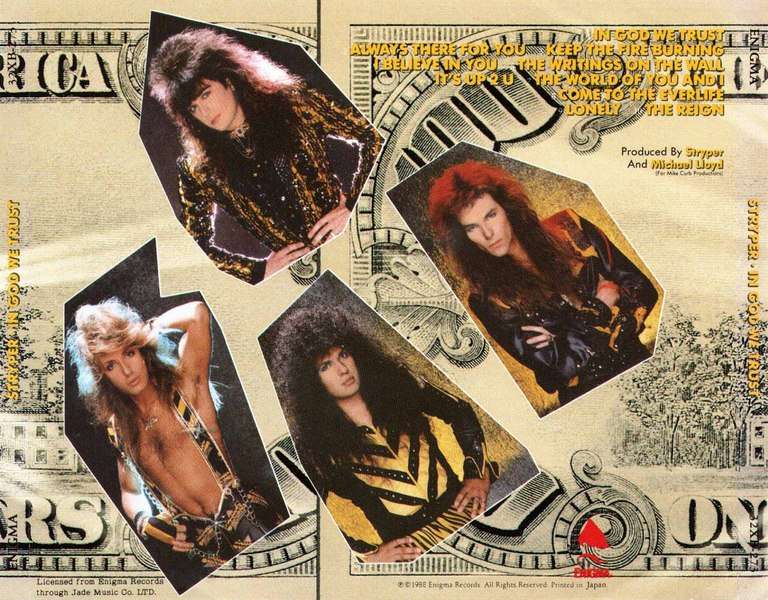 In God We Trust is the fourth studio album by Christian metal band Stryper, released in 1988. The album achieved Gold record status, selling over half a million copies.Three singles were released including "Always There For You" and "I Believe in You" which both hit the Billboard Hot 100 chart peaking at No. 71 and No. 88 respectively.The third single "Keep The Fire Burning" did not chart.The album received two GMA Dove Awards for "Hard Music Album" and "Hard Rock Song" for the title track.This album sounds like a near-complete clone of its predeceasor, it has the same elements of the songs its predecesor had: high-pitched vocals, guitar solos, and a more pop sound. What I love this album is that it sounds nearly identical to 1986's To Hell With The Devil but with a few differences: First and the most obvious is that in this album, Stryper tried to approach a more poppier sound, unlike their previous effort. Secondly, Michael sounds extremely high-pitched on this album, and that is fairly noticeable on songs like "I Believe In You" and "Lonely", compared to songs on the previous album like "Calling On You" and "The Way" which didn't fully make him sound too hich-pitched. Third, there's heavy synthesizer and synclavier programming which in my opinion makes this album shine on its own. Lastly, there's the ballads that make the album suffer for others but not for me.I have only two negatives with this album: First there's the track "Come To The Everlife". The song itself is just forgettable filled with too much heavy synth programming and has nothing redemable. Another negative I have with this album is that it is way too overproduced and has lost the raw feel Stryper's previous albums had.The songs on this album are extremely heavy featuring probably the heaviest songs Stryper ever released: The title track is full on heavy and has an incredible guitar solo which is just memorable, "Always There For You" sounds like part 3 to "Calling On You" from the previous album. "I Believe In You" is Stryper trying to write a follow-up to their biggest hit and it didn't really work sadly, though I think the song is just amazingly written and beautifully sung. And then there's "Lonely", which quite possibly could be my all-time favorite Stryper song featuring one of the greatest guitar solos I've ever heard.In my opinion I say "In God We Trust" could've easily been a Volume II to its successful heavy predecesor, and it will forever be my favorite Stryper album. If this was Stryper's last album before their breakup in 1993, this would've been the perfect temporary goodbye to them. If you're looking for a Stryper album with heavy riffs and great songs, then this is the album for you. But if you're only a fan of Stryper's hard rock songs only and don't like power ballads in general, then I recommend you totally skip this album entirely.