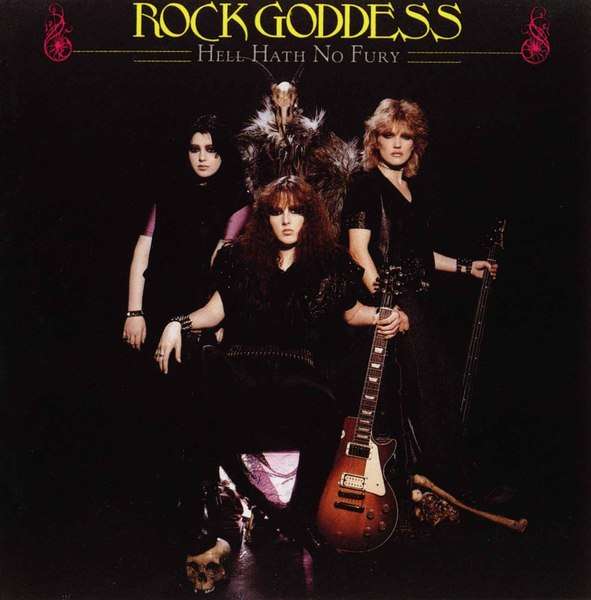 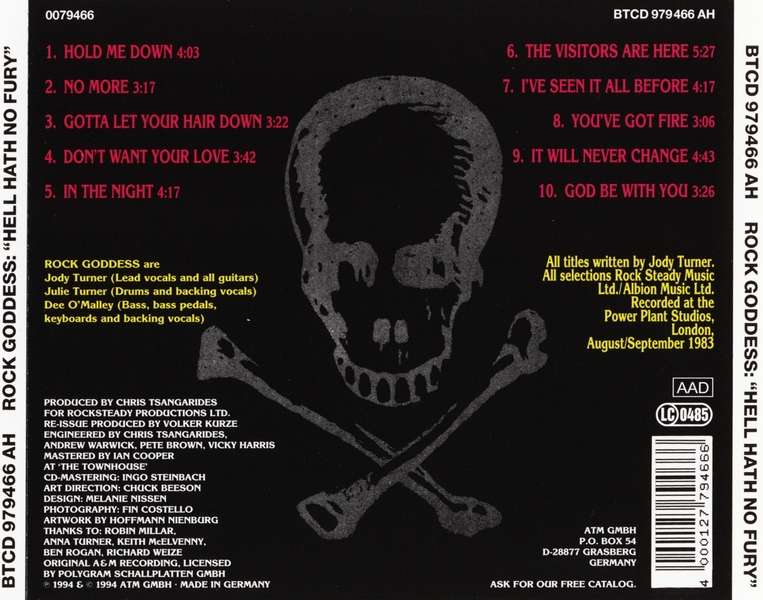 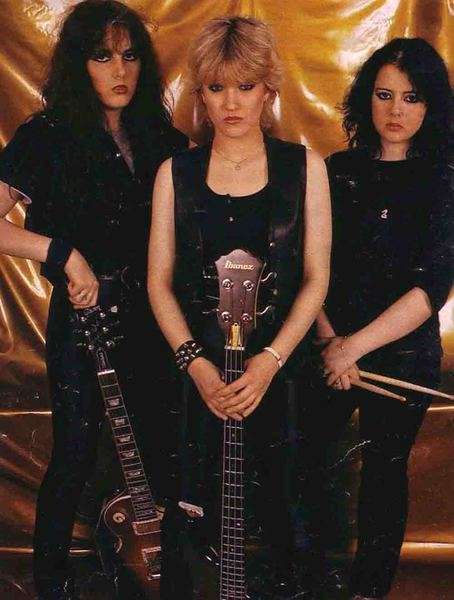 Rock Goddess are an English all-female heavy metal band formed in Wandsworth, South London, in 1977 by sisters Jody Turner and Julie Turner.The band were initially active during the new wave of British heavy metal musical movement, releasing two singles that entered the Top 75 charts in the UK. The band had a cult following throughout the 1980s and reformed in 2013.The band was formed in Wandsworth, South London in 1977, by sisters Jody Turner (vocals and guitar) and Julie Turner (drums) when they were thirteen and nine years old respectively.They recruited high school friend Tracey Lamb on bass guitar and that completed their first line-up. Later Donnica Colman joined, adding a second guitar, and after her departure, Jackie Apperley replaced her, also on second guitar. After Apperley left, the band rehearsed intensively as a trio, and placed a track on a sampler album, which circulated in the London music underground.Meanwhile, their manager John Turner, Jody and Julie's father, who owned a music store and rehearsal rooms, used his musical connections to get the band their first gigs. Finally, after an appearance at the Reading Festival in 1982, the band obtained a recording contract with A&M.They released their eponymous debut studio album with record producer Vic Maile in February 1983, and at that time there were temporary legal problems – Julie Turner was still a minor attending high school and she was restricted in the number of live shows that she could participate in.Also during this period, Kat Burbella briefly joined the band as a second guitarist, and Tracey Lamb became disgruntled and quit the band, initially forming the band She with Burbella, but then joining Girlschool in 1987. She was replaced by Dee O'Malley, who played the bass guitar and keyboards on the band's second studio album, Hell Hath No Fury, which was produced by Chris Tsangarides and released in October 1983. The band co-headlined with Y&T, supported Iron Maiden and Def Leppard on UK and European tours, and embarked on their own headlining tours. O'Malley announced her pregnancy just before Rock Goddess' first US tour and left the band. Rock Goddess left A&M with their third album unfinished and unreleased.O'Malley was replaced by Julia Longman on bass guitar, and Becky Axten on keyboards.In 1987, their third studio album was released exclusively in France, with the title Young and Free, however, due to insurmountable problems Rock Goddess disbanded shortly thereafter. In 1988, the Turner sisters reappeared as the Jody Turner Band with two male musicians, but they did not go beyond the local club circuit.Jody Turner fronted a new line-up of Rock Goddess in 1994. After a name change to Braindance,the band disbanded again in 1995. They played their last gig at the pub Thomas O'Becket.The band reformed in 2009 to play the Hard Rock Hell music festival in Prestatyn, Wales, but were forced to split before they had a chance to perform.In March 2013, it was announced that the original line-up of Jody Turner, Julie Turner, and Tracey Lamb had reformed and would start recording a new album. The three of them began the process of recording a new album tentatively titled Unfinished Business.The album failed to appear, but in 2017 a 3-track EP was announced. It's More Than Rock and Roll is scheduled for release on May 19th, 2017, and a video for the title track was released via Vintage TV on April 21st of that year.

Hell Hath No Fury was the second studio album by British heavy metal band, Rock Goddess.All songs were again written and composed by Jody Turner. The American version was published with different cover artwork and 2 different songs, taken from the "I Didn't Know I Loved You (Till I Saw You Rock 'n' Roll)" single, instead of songs 2 and 7 of the European edition.Rock Goddess was a productive all-female band that emerged in the mid 80’s and had to frequently contend with common and inevitable comparisons to titans Girlschool. Coming off the strength of a solid debut full-length, where the band established itself as a powerful, ironically ballsy pop tinged hard rock act, with strong grooves, and skill in song-crafting, the pressure was on the band to follow-up with something worthy of a place alongside their widely celebrated (and now cult classic) self-titled album. Some argue that this album failed in that task. Some argue that considerable aggression and energy was lacking on the record, leading it to have less impact and staying power than the predecessor, while others believe it’s another decent offering of all girl pop rock. To be honest, both are true. While this one doesn’t have quite the impact of the first, it’s still hard rock, very much in the same vein. A decent, though not overly strong or interesting offering that’s at least worth a few spins.‘Gotta Let Your Hair Down’ showcases a band that still has a strong knack for crafting commercially sensitive, though rough and ready hard rock anthems. This one is basically a pretty strong lesson on how to rock hard, with ‘tude, and still be viable as a commercial act. Throughout the rest of the album, attempts at this same undertaking are either successful, or not so. ‘In the Night’ has some charm, but is a little flat, repetitive, and tired. Either way, Jody Turner is always on form. Her rough, snarling and gritty voice gives the band much of it’s character. She actually sounds quite a lot like the awesome Leather from Chastain when she is delivering with aggression, while has the ability to sound softer, and more soothing (Much of the early ‘The Visitors are Here’). Said track is an interesting, complex and drawn out offering and marks another high point on the album. It has a mixture of smoother, soft vocal sections, intertwined with hard rockin, punchy choruses, laden with heavy guitars. Huge hooks in this one are another exemplification of a solid-pop-rock writing outfit.Cool stuff here.A pretty solid album, if lacking a wee bit in the power present on the first. A few songs feel a bit fillerish, while the aforementioned ‘Gotta Let Your Hair Down’ and ‘The Visitors are Here’ with it’s strange, keyboard infused, progressive feel, and interesting subject matter, are definite high points. Either way, this is a solid band – though they are often left standing in the shadow of scene-leaders Girlschool, Rock Goddess have their own sound, only sometimes playing the same style of heart, party hard power pop that Girlschool plays. On this album there are almost proggy touches coming through and plenty of soulful, passionately delivered vocals and choired backup sections. This band needs and deserves a bigger audience, so I advise picking this thing up, or at the very least, their debut offering. Solid, melodic hard rock here that is too frequently overlooked.