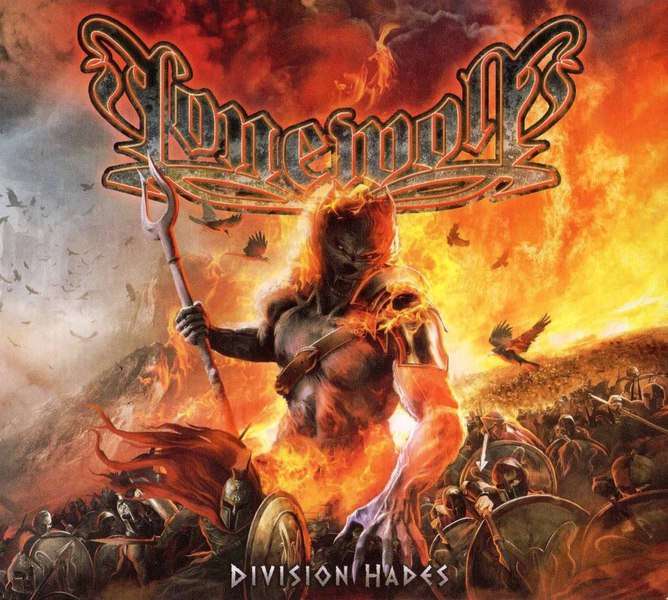 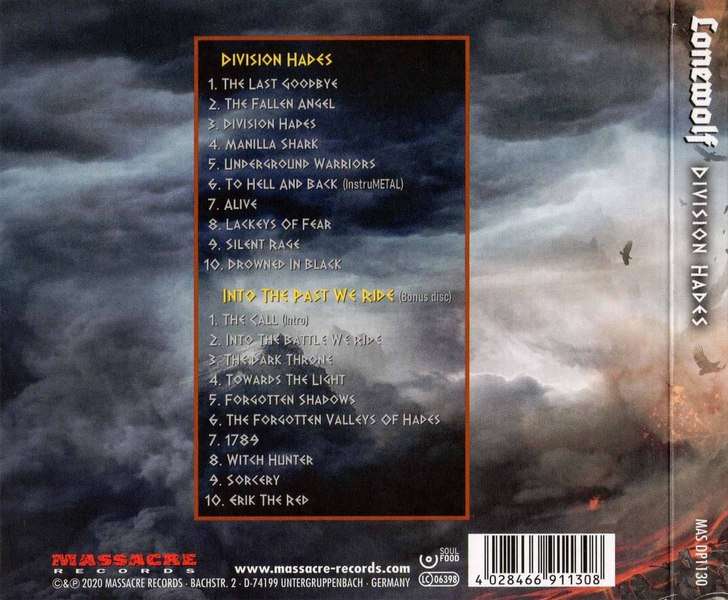 The history of Lonewolf, founded in Grenoble (France), began in 1992 From the beginning the band the True Heavy Metal had prescribed and published numerous demo tapes and a 7 "and even an album that was never released and as "The Lost album" is called. After a bitter disappointment with a French label located Lonewolf disbanded in 1996.In 2000, the band with the demo "March Into The Arena" returned, which was released as a debut album via Goi Music 2002 again.The second album "Unholy Paradise" followed two years later. "Made In Hell" appeared in 2008 via Eat Metal, followed by "The Dark Crusade" 2009 (via Kathargo Records / Killer Metal Records). The latest albums of the band "Army Of The Damned" (2012, Napalm Records) and "The Fourth And Final Horseman" (2013, Napalm Records).Lonewolf played first French metal band ever in Greece and opened for Grave Digger at their first show in France. In the last ten years Lonewolf played a headlining European tour with Dragon Fire and Iron Fate in 2011 and were also present at the "Wolf EU Nights Tour" in 2012 with Powerwolf, Stormwarrior and Mystic Prophecy. The band also played at countless festivals.

I think is would be fair to say at first listen, without knowledge you would say LONEWOLF come from the heart of Germany, they definitely have a Teutonic Speed/Power metal sound. But you would be wrong. These Metal maniacs are in fact French. Formed back in 1992, and splitting up in 96, before coming back stronger in 2000 to the present day, amassing an impressive back-catalog over the past 20 years.LONEWOLF are, in their words, True Metal. They are loud, fast, technical and heavy. As I mentioned their sound is very similar to a number of German Speed and Power Metal bands, and perhaps one in particular. There is a more than a passing similarity to another lupine inspired band. Hardly surprising when you know the album was mixed and mastered by Charles Greywolf of POWERWOLF. Their sound is very similar but with a bit of a harder edge than their god bothering wolf pack brethren. But the tropes are there, the choral chanting, church organs, the bombast, gruff but clear vocals, they also have a wolf on the album cover, but their wolf is a LONEWOLF, dressed as a gladiator rising up from a demonic hoard (his division of hades no doubt). No wolves dressed as clerics or monks and not so much of the heavy iconography.So what is their 10th album like? From the opening track “The Last Goodbye”, with its guitar and chanting with the spoken intro. A slow burn to kick off, but soon powering on (I was trying to think what the wolf equivalent of galloping is) through to the last track of the new stuff “Drowned In Black” the quality doesn’t drop, all the songs here are equally as good as the next.There are 10 new songs and 10 older tracks here, so I’m not going through each one, but some of the highlights of the new stuff include the title track “Division Hades”, which is as heavy as it gets, put the Power in Power Metal. “Manilla Shark”, a tribute to the MANILLA ROAD man Mark “The Shark” Shelton. The pair of “To Hell and Back (InstuMETAL)” and “Alive” are the strongest point of the album, they showcase the twin guitar ferocity, and melody, and are a punchy attack to the guts.The production on all the new songs is crisp and balanced, the gruff nature of the vocals suits the music so well, the guitars soar over a rail-gun precision timed drum beat, and yes there is even bass in there if you seek it out!The only slight critisum is there isn’t a lot of light and shade. The intro at the beginning and the short instrumental interlude, and “Drowned In Black’s” less bombastic bits, it would have perhaps benefitted from one slow, or even mid-paced song, this would have probably made the album a 10, rather than the 9 it gets.So we begin disc 2 in a similar fashion, although in this case “The Call” is the intro. Here we get rerecording’s of some of the bands earliest songs. There is some fine fretwork on display here, “Into Battle We Ride” is an excellent example of this, the question is how much of this is the excellence of the band who did the re-recoding or the material? Well I suppose you cannot polish a turd, but I have to say the bonus track are mostly as good and in some cases better, simply because the songs have a vibrancy and the guitar work is to the next level. I think also most of the songs on the bonus disc are a little shorter, which gives them a bit more urgency. Also there is a few more gear changes, for example “Forgotten Shadows” is a more mid paced song, and has a bit of a MAIDEN vibe in the guitar work, the pace give the song power.“1789” has a real stein swilling, air punching swagger about it. Yes it has a bit of a RUNNING WILD feel, but again the guitar work is different class, and it add a bit of fun to the proceedings.The rest are pretty much standard WOLF fare, finishing up with a “Eric The Red” a Viking tale, a mid paced pomp of a tale, again with more than a nod to the IRONS, but a very good end to a mammoth 20 songs of pure METAL!!