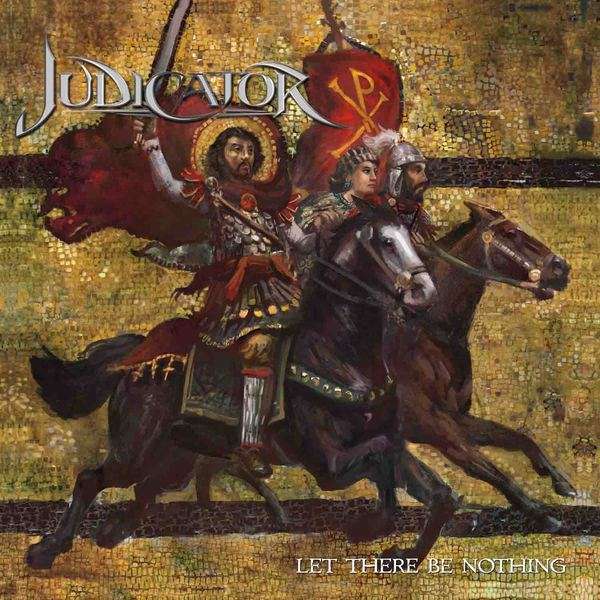 Judicator is a US Power Metal band formed by Tony Cordisco and John Yelland in 2012 after the two met at a Blind Guardian concert. Sharing a love of Blind Guardian and old school power metal, the two recorded a quick cover of Helloween’s classic song ‘Ride the Sky’ for fun one day, and quickly realized doing a full on album of original material in that vein would be a great homage to their heroes and fun for any of their friends to listen to. The debut album “King of Rome” was then crafted over the course of a few weeks in 2012, utilizing home recording and drum machines, as Judicator did not have any plans to be a ‘real band’ as it were, and simply just wanted to put the album up on bandcamp for whoever might find it enjoyable to listen to. Subsequently, the album was released on October 30th, 2012, showcasing Tony and John’s shared love of old school power metal and Blind Guardian vocal stylings. The album’s concept followed the final days of Napoleon Bonaparte’s last campaign, leading up to his eventual defeat at the Battle of Waterloo.After a number of affirming underground reviews and unexpected, humbling fan and friend reactions, John and Tony decided the band would be more than just a one album ‘fire and forget’ recording project set on paying homage to their favorite bands, and quickly began working on the follow up “Sleepy Plessow” — this time focusing on developing more of their own heavy/power metal sound and incorporating a wider range of their influences, and also putting a little more into the production side of things without going outside the means of what they had available to them. The album was released less than 7 months later in June of 2013. The sophomore effort showed a departure from the speed and riff obsessed nature of ‘King of Rome” and focused more heavily on atmosphere, melody, slower tempos, more complex vocal arrangements, and bigger overall narrative concept. The album also brought in numerous guest vocalist from friends and underground bands alike in order to portray the various characters and soundscapes needed for the album. The story of Frederick the Great of Prussia showed the band progressing into a more mature and developed territory as a band, but Judicator still remained a homemade recording project with only Tony and John at the helm.Feeling that ‘Sleepy Plessow’ had demonstrated the improvement they wanted over the first album, and feeling encouraged by the exponential increase of listener and reviewer engagement, John and Tony decided it was time to begin work on a third, and change the nature of the band to reflect a more a traditional setup and help progress the band’s material to a more professional level. The band added drummer Jordan Elcess in late 2013–whom Tony had worked with previously in Sedulity, Vermiform, Grimaced, and other bands–and began work on the third album ‘At the Expense of Humanity’. This album took the band to new heights and finally saw Judicator transition from a homemade recording project into an actual band–leaving behind the days of home laptop recording, and quickly released albums. The band played their first two live appearances at the Deland Rock and Metal Festival in Fall 2014 leading up to the release of ‘At the Expense of Humanity’ in March of 2015. The album showed an even further expansion of the band’s sound, both musically and production wise. The album pushed the band in a more progressive and personal direction, as the concept revolved around John’s retelling of the story of how he lost his brother to cancer when he was 18 years old. The album’s tragic and personal concept was illustrated by a more diverse and progressive approach to power metal. The band was able to partner with Dirty Viking Audio (Shadowdance, Noble Beast, Helion Prime, etc) and Tower Studios (Ayreon, Noble Beast, etc) to have their first truly professionally produced album, and with the help of fan support, was able to crowd fund the production for the album. Additionally, ‘At the Expense of Humanity’ saw the band partner with Divebomb Records, which Tony had previously worked with in Project: Roenwolfe, for a widespread release of the album and beyond. The album was met with enthusiastic underground/online critical praise, noting the professional and mature change of direction for the band, and that Judicator had finally come into their own. The band was able to also embark on their first small regional tours throughout the Southwest and West Coast of the United States in Spring 2015 and Summer 2016 in support of ‘At the Expense of Humanity’.Currently, the band is hard at work promoting the release of their fourth album, “The Last Emperor”. The album shows a full swing return to their germanic influenced power metal and features a re-recording of the title track of the debut album “King of Rome” with an accompanying music video.“The Last Emperor” is a historical power metal concept album covering several events and figures from the first Crusades and the People’s crusades, including Pope Urban II, Godfrey of Bouillon, Alexios I Komnenos, Raynald Porchet, and Bohemond I of Antioch. The album was recorded in 2017 and reamped, edited, and mixed by Carlos Alvarez of Dirty Viking Audio. The album was once again mastered by Brett Caldas-Lima of Tower Studio. Hansi Kürsch of Blind Guardian appears for additional lead and backing vocals on the song ‘Spiritual Treason’. David Brown of Chaos Frame returns once again for support with choir and backing vocals, as well as featuring on guest lead vocals on “Antioch”, playing the part of the martyred knight Raynald Porchet.