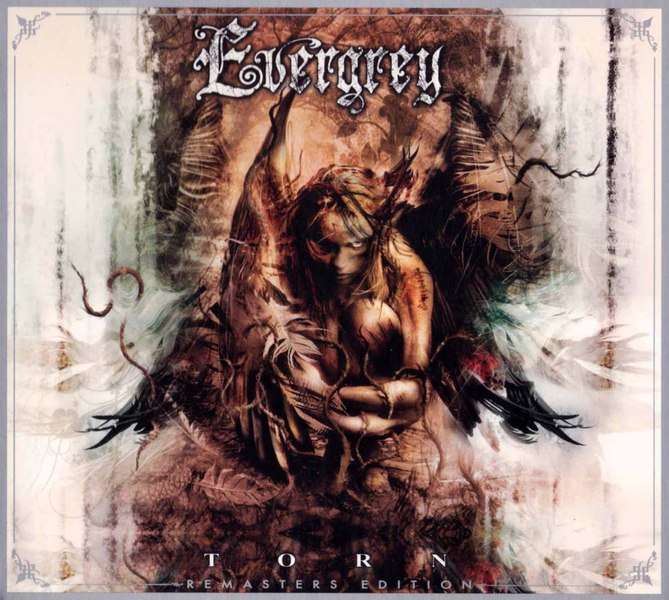 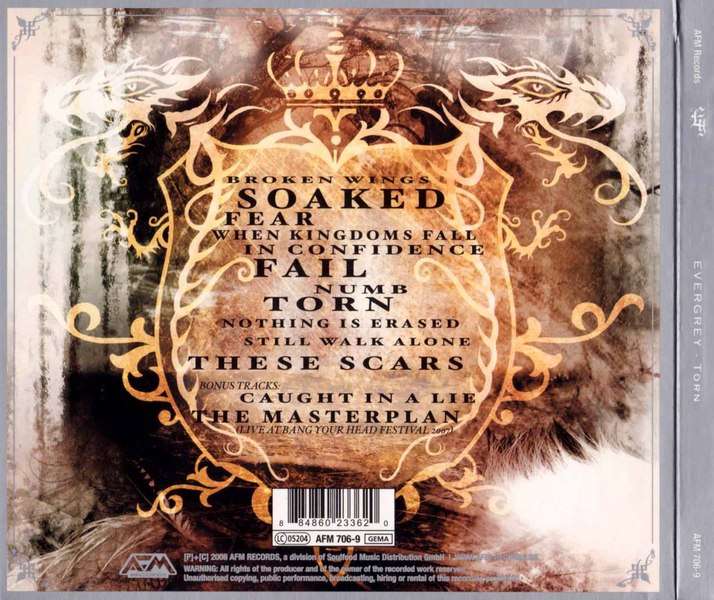 Evergrey. The dark Heavy / Power Metal band that brought the Metal world such gems as Solitude Dominance Tragedy , Recreation Day and Inner Circle, keeps up the good work with another great release for 2008 with Torn, with the recruitment of ex-Startovarius Finnish bass player, Jari Kainulainen. These guys reached another milestone on their way to becoming one of the best in their field.Since their formation in 1995, Evergrey became one of the icons of Dark Metal music. Their lyrics are full with desperation along with sadness, betrayal, loss of hope, inner and outer fears and religious meanings. Their music is also dark and sometimes mysterious with a lot of keyboard atmosphere, heavy and low riffs and heart breaking solos, especially on this release which is one of their heaviest material, whiny, sometime on the verge of crying, and vocals with plenty of depth. All of these traits assist in creating the picture that is forevermore grey.The production, which was engineered and supervised by one of the greatest producers that came out of Sweden – Fredrik Nordstrom who is also a guitarist in the Heavy Metal act, Dream Evil, is absolutely flawless and by the amazing guitar and drum sound, one can really recognize Nordstrom’s touch like he did on other projects e.g. his own band and on the joint Greek / American Metal act Firewind.Characteristics here include the heavy sound of B tuned guitars that drive through the album with deep and heavy riffs and cracking solos. The guitars sound very much like the new heavy Paradise Lost, Dream Evil and Firewind. The difference between this sound and the other bands mentioned is that Evergrey chose a sound that can be related to their way and fit their needs. Among some of the heavyweight pieces on this album are: “Fail”, “Soaked” and “Nothing Is Erased”.One thing that is irritating on this album is that there is a small resemblance, regarding the songs themselves, to some of their old material. Surely fanatic fans will pay attention to this mild aspect that surrounds this piece.Also amongst the music is clean and accurate drumming and atmospheric keyboards, that on this album, are way behind in comparison with Evergrey’s old materiel and gives various melodic edges without over engulfing the guitars and bass.Then there are the vocals. Vocalist and guitarist, Tom Englund, is one of the best vocalists of this sub-genre. This man can teach many vocalists in Heavy Metal on how to really express their emotions in their songs. Although sometimes his voice can get a bit whiny, it really helps him spread his words and to reach out to the hearts of the listeners, he has created his own vocal style with the depth of Bruce Dickinson of Iron Maiden. His voice is one of the main reasons that Evergrey, with all their darkness, successfully formed something that is truly unique since the beginning of their career.Torn presents almost a full release of equally excellent tracks. The best of all is “In Confidence” that holds in one’s memory with its dark aura and great chorus and riffs. “Broken Wings” , the opener , is also a song to remember along with “Still Walk Alone” which is another heavy hitter with a great chorus. Joining the club are songs like “Soaked”, which can be interrupted as a story of suicide, “When Kingdom Falls” and the great “Fail” that contains great heavy riffs and solos. The song that fell short is the bonus track, “Caught In A Lie”. It has a good title to it, but more than half of it is a boring and almost unbearable rhythm. The self titled “Torn” is a solid track which could have been a lot more than it is.Many address Evergrey as a Progressive Power Metal act. Although it is silly to start an endless argument about the band’s sub-genre, there is something imperative that must be said. Evergrey,the 2008 model, for the sake of opinion, is a dark Heavy / Power Metal act that do it a bit differently than other acts to try and be original in their own way. Torn is living proof for this anecdote. Evergrey gave it all this year and many of their fans can be proud of this release and with hope that they will keep on doing it with hearts full of emotions and heaviness.