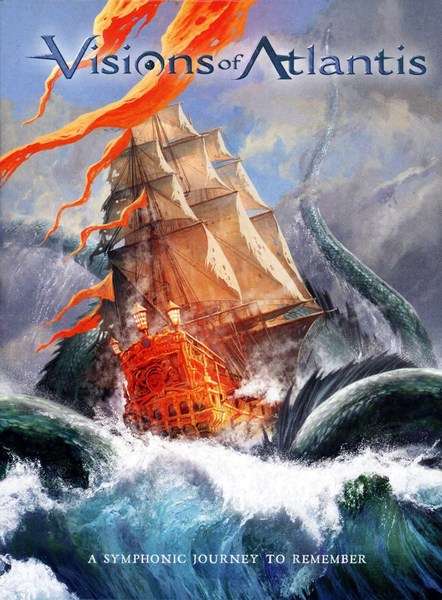 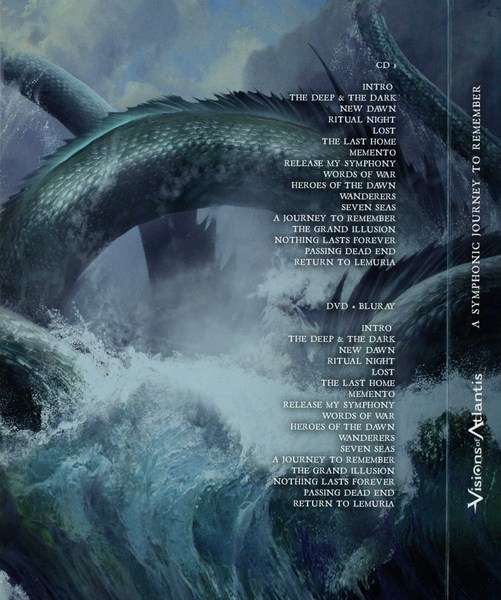 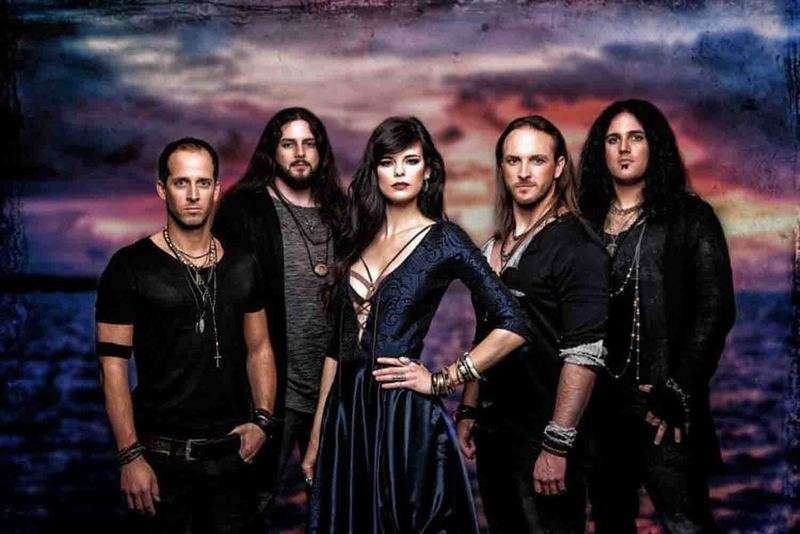 Visions of Atlantis is a metal band from Styria, Austria, founded in 2000. Inspiration came both from successful symphonic power metal band Nightwish and from the myth of Atlantis. The equal combination of male and female vocals distinguishes Visions of Atlantis from Nightwish however and is more reminiscent of bands such as Lacuna Coil.Fascinated by the myth of Atlantis, Werner Fiedler, Thomas Caser, Christian Stani and Chris Kamper decided in August 2000 to work out a concept inspired by the secret of Atlantis. Late in summer mezzo-soprano Nicole Bogner joined the project, and this was the birth of Visions of Atlantis. A first demo, Morning in Atlantis was released in 2000.In 2001 they signed with TTS Media Music/Black Arrow Productions, and in 2002 their first album, Eternal Endless Infinity was released.In 2003, the band saw some changes in line-up, replacing Christian Stani with Mario Plank and Chris Kamper with Miro Holly.Now with Napalm Records, which released the band’s second studio effort ”Cast Away“ worldwide in November 2004. To mark the release, Visions of Atlantis produced their first official music video to the track “Lost“, which received significant airplay on VIVA and MTV, and made it possible for the band to present the album. In early 2005, Visions of Atlantis did their tour across Europe, while being supported by labelmates Elis and Celtic rock based band Lyriel.In late 2005, Bogner left the band due to commitments elsewhere.After Nicole left the band, she was replaced by American soprano singer Melissa Ferlaak (formerly with Aesma Daeva) and Wolfgang Koch replaced Werner Fiedler. In 2006, Martin Harb, who already played with VoA on their tour in Mexico in 2003, replaced Miro Holly. In May 2007, VoA released their 3rd album Trinity, mastered at Finnvox studios and recorded at Bavarian Dreamscape Studio. The following autumn brought Visions of Atlantis to the United States, where the band toured together with Epica for 6 weeks and won numerous new fans.Upon returning, the band went through changes in the line-up. On November 28, 2007, a message was posted on the official VoA website saying that Melissa Ferlaak and Wolfgang Koch had left the band, both citing personal reasons. Following this Visions of Atlantis announced a few days later that their ex guitarist, Werner Fiedler, had rejoined the band.After Melissa's departure, Visions of Atlantis not only looked for a replacement for a singer, but also wrote the song material for the fourth album. The band was advertising on their website the position for a female vocalist for several months, and on September 3, 2008, they finally announced that they had found a new female singer; however, her identity wasn't revealed until February 1, 2009, as the 20-year-old Austrian soprano vocalist Joanna Nieniewska.On July 29, 2009, VoA announced that because of health problems, Joanna Nieniewska is no longer in the band but will continue to support VoA behind the scenes.The band announced the replacement vocalist, Maxi Nil from Greece, and was also known for her work with On Thorns I Lay, guest with Moonspell and her former band Elysion.On December 3, 2010, VoA announced the new title of their 4th studio album Delta which was released on February 25, 2011 worldwide.On July 18, 2011, bass player Mario Lochert left the band due to crucial internal differences. In a recent interview Harb said that the band is not planning on replacing him. Instead, they will continue without a bassist as a fixed band member.In August 2011, the band announced the title of their first EP Maria Magdalena, it was released on October 21, 2011.On January 6, 2012, Visions of Atlantis announced on their Facebook and MySpace pages that former singer Nicole Bogner had died at the age of 27 after fighting a severe disease over a long period of time. The band was saddened to have lost their first vocalist and expressed sincere gratitude to Bogner, not only for five years of sharing a musical vision, but also for more than a decade of friendship inside and outside Visions of Atlantis. Without Bogner, the band wouldn't have been born.On January 27, 2012, the band announced the title Ethera for their upcoming album, which was scheduled to be released in 2012. Ethera was released on March 22, 2013. It was the first album with guitarist Christian Hermsdörfer and with no official bassist.Ethera was dedicated to the late Nicole Bogner.On December 6, 2013, Visions of Atlantis announced on their Facebook page that most of the line-up was parting ways with Visions of Atlantis, leaving the only remaining and founding member Thomas Caser on Drums. This decision was mostly because of a desire from the parting members to play their own style of music, whilst the band was orientating to go back to its classic style. Thus, it welcomed back some of its old members : Werner Fiedler (guitars), Chris Kamper (synths), and Michael Koren (Bass). Maxi Nil, was replaced by Clémentine Delauney, and Mario Plank, by Siegfried Samer.

VISIONS OF ATLANTIS’ long cherished dream came true: An unforgettable journey through the maritime depths of their history accompanied by the Bohemian Symphony Orchestra Prague!This October, VISIONS OF ATLANTIS will continue their entrancing symphonic journey through the maritime depths by presenting fans with their very first LIVE album/Blu-ray/DVD, A Symphonic Journey To Remember! Recorded live at the 2019 BANG YOUR HEAD!!! Festival with the Bohemian Symphony Orchestra Prague, the multi-format live offering is set to be released via Napalm Records on October 30, 2020.The audiovisual voyage through the long and successful history of the band showcases their strong, manifold identity and cements their standing at the top of the scene. Alongside their bandmates, the heart-wrenching duets of Clémentine Delauney and Michele Guaitoli are underlined by the outstanding musical power of the Bohemian Symphony Orchestra Prague.The highly energetic, enchanting live music video “Heroes Of The Dawn” catches a first visual spark of the palpable live atmosphere of the festival, and the band’s breathtaking musical delivery.Following the release of their latest chart-breaking studio album, Wanderers (#17 UK, #30 US, #39 DE), symphonic metal alliance VISIONS OF ATLANTIS are now ready to conquer your eyes and ears with this unique, first-class live appearance!Clémentine Delauney on A Symphonic Journey To Remember: “We are absolutely thrilled with finally releasing our very first live blu-ray/DVD, “A Symphonic Journey to Remember”. Our show at Bang Your Head!!! Festival in 2019 with the Bohemian Symphony Orchestra Prague gave us the perfect point in space and time to make the dream of playing with an orchestra come true. We hope you will enjoy this audiovisual experience as much as the memory of this show is still vivid and precious to us!”In 2019, VISIONS OF ATLANTIS realized their dream of captioning their symphonic experience at the highest level. Supported by the orchestral accompaniment of the Bohemian Symphony Orchestra Prague for the very first time, the quintet captivated the audience once again with their impressive headliner set at last year’s BANG YOUR HEAD!!! festival. This unique experience is captured on Blu-ray/DVD and audio formats – 17 atmospheric tracks guide listeners and viewers through the unparalleled, powerful discography of VISIONS OF ATLANTIS. The outstanding symbiosis of Clémentine Delauney’s and Michele Guaitoli’s vocals, accompanied by the band’s breathtaking soundscapes and impressive scenery, will guide fans through the deep valleys of the untamed seas.This unforgettable live experience will be available as a special Blu-ray/DVD/Audio CD bundle as well as a double vinyl Gatefold, as an exclusive deluxe edition and via all audio streaming services.