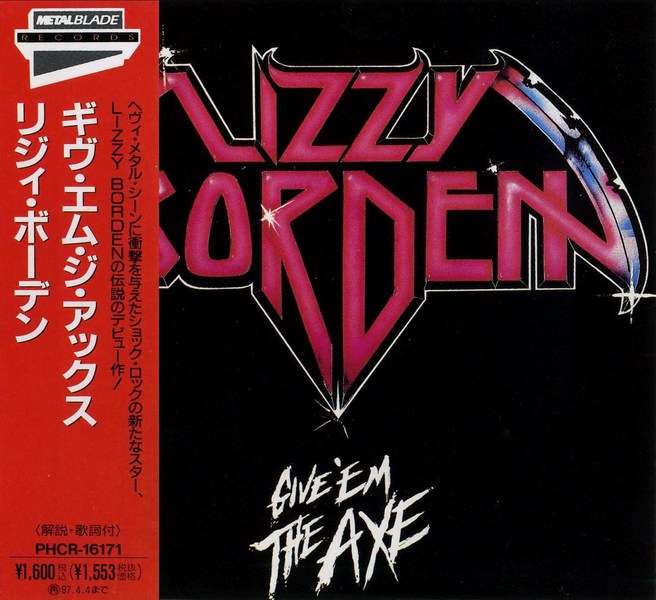 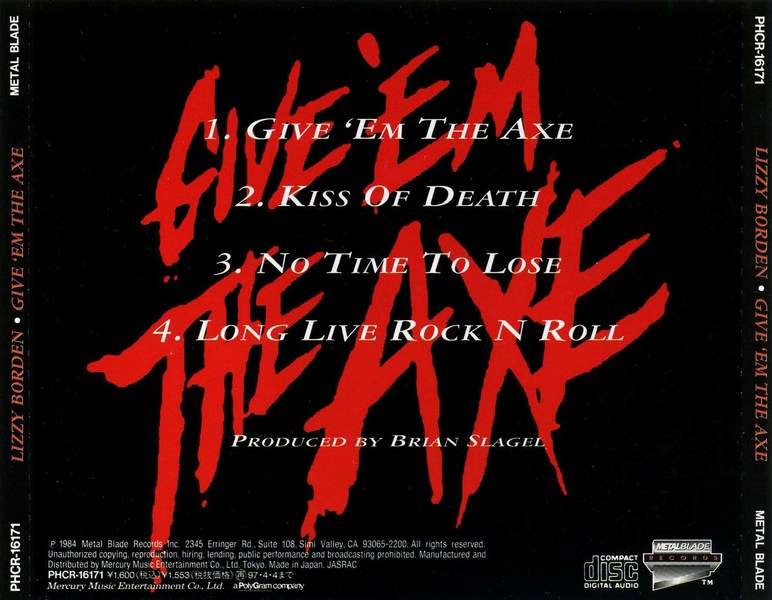 Lizzy Borden is an American heavy metal band formed in Los Angeles in 1983. To date the band has hit the top 100 in the United States four times.Lizzy Borden is also the name of the band's lead vocalist.The band was founded in 1983 by Lizzy Borden and Joey Scott. The band got noticed after their song "Rod Of Iron" featured on Metal Blade Records Metal Massacre IV compilation LP. The band signed to Metal Blade in 1984 and released their debut EP "Give 'Em The Axe" in May of the same year.The band is named after the notorious Lizzie Borden, a woman accused and acquitted of murder in the late 19th century.In 1985 Late guitarist Alex Nelson replaced original guitarist Tony Matuzak and was first featured on the bands only live album to date titled "The Murderess Metal Road Show".In 1987 the band reached their commercial peak with the release of their third LP "Visual Lies" which saw guitarist Joe Holmes make his debut with the band.The first single from the album "Me Against The World" was featured in the cult film Black Roses. Joe Holmes later went on to join Ozzy Osbourne's band.In 1989 the band issued their fourth studio album "Master of Disguise" via their label Metal Blade, the LP was released on July the 15th 1989 and has since become a cult classic.The band frequently plays songs from this album live.The band was featured prominently in the rockumentary The Decline of Western Civilization Part II: The Metal Years (Directed by Penelope Spheeris).In the early 1990s the band slowed down its activity due to the changing metal scene and the rise of grunge, Singer Lizzy alongside bassist Marten Andersson and drummer Joey Scott went on to play in the glam band Diamond Dogs (later renamed Starwood).By the early 2000s the band was once again fully active and touring with 3/5 of its classic lineup (Borden, Joey Scott & Alex Nelson) alongside longtime bassist Marten Andersson. Lizzy Borden previewed their new CD and tour entitled 'Deal With the Devil' at the 'Wacken open air Festival Germany', in front of 35 thousand people followed by a world wide tour. Longtime Lizzy Borden fan, artist and multimedia entrepreneur Todd McFarlane (best known for his creation of Spawn and stylistic revision of Spider-Man) was enlisted to capture the essence of Lizzy Borden for the Stage show and the CD cover art. On May 17, 2004, guitarist Alex Nelson was killed in a head-on car collision. Lizzy Borden disbanded soon after.In 2006, Lizzy Borden regrouped with new guitarist Ira Black and on November 1, 2007, the album Appointment with Death was released worldwide. The album also features guest appearances by George Lynch (Dokken, Lynch Mob), Dave Meniketti (Y&T), and Corey Beaulieu (Trivium), among others. The first video for "Tomorrow Never Comes" was nominated for video of the year and was in the Top 25 Metal Videos of 2008 on MTV's Headbangers Ball. The follow-up video for "Under Your Skin" premiered in April the same year.In early 2008 the band announced various festival appearances including Sweden Rock Festival (Sweden), Kobetasonik festival (Spain) and Bang Your Head Festival (Germany). In November 2008 Lizzy Borden toured the United States with Finnish Monster Rockers Lordi. The band toured Europe as part of their headlining tour, performing in 11 countries. Lizzy Borden was the first-day headliner of the two-day Keep It True XII festival at Tauberfrankenhalle in Lauda-Königshofen Germany 2009. North American festival appearances included Rocklahoma and Rock Gone Wild.On Jan 24, 2009, former guitarist Corey James died in a car accident.In 2010 Lizzy Borden toured North America and Europe, including festival appearances at Wacken Open Air 2010, Alcatraz Metal Festival, Leyendas del Rock festival (cancelled) and Elsrock Festival.In 2011 Lizzy Borden launched the "Summer of Blood" tour in North American Followed by the European version, entitled "Death Takes a Holiday Tour", festival appearances in 2011 included Heaven and Hell Metal Fest, Christmas Metal Festival and the Hard Rock Hell Festival.On Dec 17, 2011, drummer and founding member Joey Scott married their tour manager and dancer in Las Vegas, NV.In 2012, Lizzy Borden performed on various Open Air Festivals in Mexico and Europe. Festivals included Hellfest Open Air Festival in Clisson France and Gods of Metal in Milan Italy. Both festivals were with Ozzy, Mötley Crüe, Guns N' Roses and more. They returned to Europe in July 2012 to play Zwarte Cross festival in the Netherlands, Headbangers Open Air in Germany and Bulgaria the first time in their career at the Kavarna Rock Festival.In 2013, Lizzy Borden premiered their new tour "30 years of American metal" show created from the ground up at the 70000 Tons of Metal, followed by a string of North American shows and European Festivals, including the Swedish Festival Skogsrojet.Lizzy Borden has spent the last few years working on the follow up to their 2007 album Appointment with Death.In a July 2014 interview, however, frontman Lizzy Borden said that the band has no new album in the works, but has been writing new material.On January 1, 2014, guitarist Dario Lorina left the band after joining American heavy metal band Black Label Society.On August 1, 2014, Lizzy Borden performed on Incheon Pentaport Rock Festival With Former Guitarist Ira Black.Lizzy Borden signed a new record deal with metal blade for a new album to be released in 2016.

Frizzy-haired Lizzy Borden (a.k.a. Lizzy Boredom to some) is one of those early characters that had some sort of reputation for being bigger than the actual band, always leading stage show flash and theatrics, and always in the forefront: King Diamond, Nasty Ronnie, Betsy Bitch – usually the singer with some part of the band’s name in his/her stage name. It was all part of shock rock, or flash metal, and LB fit right in.The CA quintet start their career with the ep Give ‘Em The Axe, aptly named since they/he took the moniker from the 1892 murderess who destroyed her parents with an axe, features two tracks as traditional as Thanksgiving Day, one speedier number that is a fave LB tune of mine, and a Rainbow cover.The title cut and “Kiss of Death” are cut from the same pattern, but are molded with different elements. Both are moderately-paced with an undertow of NWOBHM influence, but the former is free-spirited and anthemic while the latter pursues a more storytelling gait and demeanor not unlike classic Maiden. Starting off side two with a wallop is “No Time to Lose”, a speedier and more vigorous track with great breaks bridged by fashionable guitar doodles and an energy I had hoped would dominate the future of Mr. Borden. The ep rounds out with a strong updated version of another anthem, “Long Live Rock N Roll”, that I rarely listen to.The music, lead by the paired guitars of Gene Allen and Tony Matuzak, is frenetically active, talented, and played with gumption, but the focal point of Lizzy Borden is, of course, Lizzy Borden and his perpetually piercing lungs that some describe as cheesy and annoying, but remain distinguishable and powerful amongst the melted glam cheddar that was being served hot in L.A. at the time. Some say they are a result of the glam scene. Possible. Well, if glam sounded like this, the scorn it receives from most wouldn’t be as dark a shade of dishwater gray. If glam sounded like this, I would’ve not only been a glam fag, but a proud glam fag.