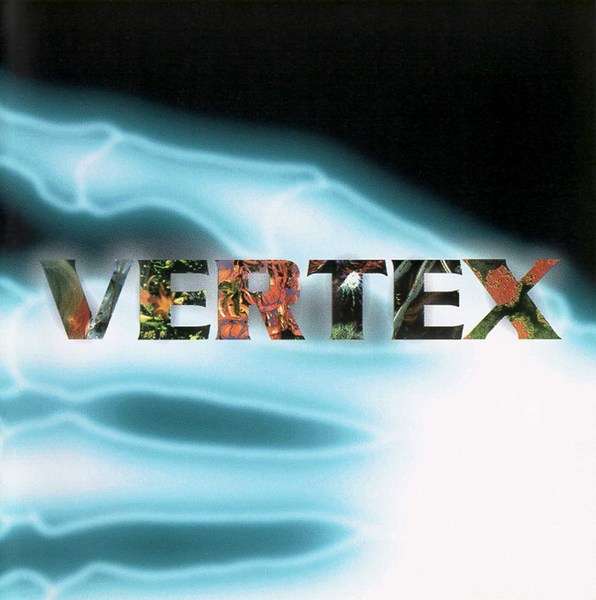 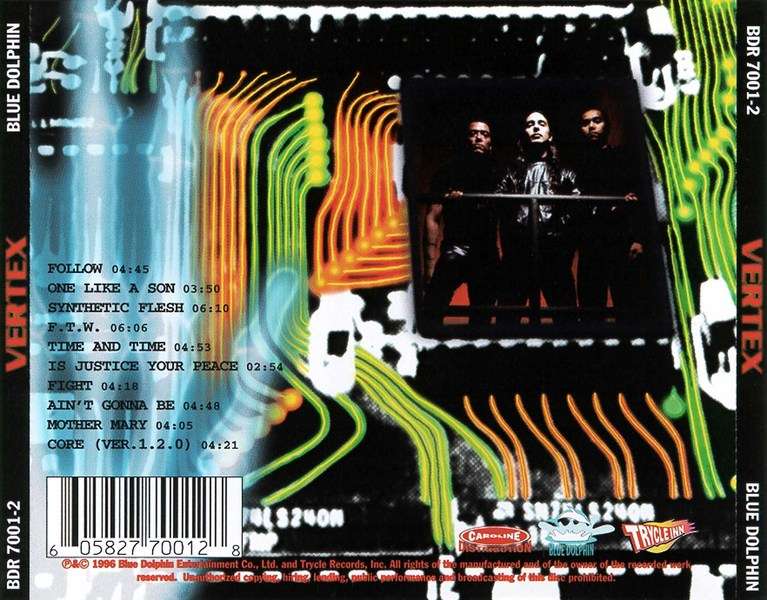 Vertex was a band formed in 1995 featuring singer Stephen Pearcy (Ratt, Arcade, Vicious Delite, Nitronic), guitarist Al Pitrelli (Danger Danger, Hotshot, Alice Cooper, Asia, Savatage, Megadeth, Trans-Siberian Orchestra), and drummer Hiro Kuretani (WXXI, Trancentral Station).They released a self-titled album in 1996 as well as a single for the track "One Like a Son" that included two remixes by Eric Caudieux and Stan Katayama. A video for this single was also released. All bass parts were played by Pitrelli, who also recorded keyboards. Bob Daisley played bass on tracks "Time and Time" and "Ain't Gonna Be". The album is a concept album with a single narrator, chain of events and re-occurring characters.Kuretani, who had met Stephen Pearcy at a gig where he opened for Stephen's band Arcade. Bassist Robbie Crane was a touring bassist for Vertex, but was not on the band's album. The band's music is categorized as industrial rock.Stephen Pearcy currently has rejoined Ratt and Robbie Crane with Black Star Riders. Hiro Kuretani went on to become an electronic music (progressive breaks) producer.

Stephen Pearcy (born July 3, 1956) is an American vocalist, best known as the former lead singer of the metal band Ratt, from 1971 until 1992, 1996 until 2000, and 2006 until 2014. He has also been in the bands Firedome, Crystal Pystal, Buster Cherry, Mickey Ratt, Arcade, Vicious Delite, Vertex, Nitronic, and Band from Hell. He has also recorded as a solo artist.Pearcy has also worked as an actor, playing the killer hippie, Timothy Bach, in the horror film "Camp Utopia".In his early teens, Stephen Eric Pearcy aspired to be a top fuel race car driver and expressed no desire to pursue a career in music.He listened to music and occasionally went to concerts in the 1970s, however he had not so much as played a note in his whole life. Fate interfered in the form of a hit-and-run driver who struck Pearcy while he was riding his friends bike one night during the summer of 1971. While he was in the hospital recovering from his bike accident, somebody gave him an acoustic guitar. After fiddling around with the guitar for a short time, Pearcy decided to shift his vocational focus from driving race cars to playing music. He started a band which he named Mickey Ratt, a take on the Walt Disney character Mickey Mouse, in San Diego during the late 1970s. After he and the band moved to Los Angeles in 1980, the band's name was shortened to Ratt and the original lineup was solidified. Playing clubs like The Roxy and The Whisky, Ratt amassed a large local following. After releasing an eponymous six song EP in 1983, Ratt released their breakthrough album Out of the Cellar on Atlantic Records in 1984, and it went multi-platinum. After releasing one gold and four platinum albums, Pearcy left the band in February 1992. Pearcy and former Cinderella drummer Fred Coury formed the band Arcade in 1992. Arcade released a self-titled album in 1993 and another album the following year. In 1996, Pearcy dabbled with an industrial metal band called Vertex (with Megadeth's Al Pitrelli and drummer / electronic producer Hiro Kuretani). Pearcy reunited with Ratt in 1996, only to leave the band for a second time in 2000 on the eve of a tour due to differences over financial allocation amongst band members.The year 2000 was a prolific one for Pearcy. He put out a collection of previously released songs called Before and Laughter. He also re-released an independent side project from 1995, called Vicious Delite (VD), in conjunction with the label, Triple X, distributing his own record label Top Fuel Records. Pearcy released Social Intercourse, his first album of new solo material, in 2002.His May 2005 album, Fueler, features a song called "Drive With Me" that has been featured on ESPN2's weekly program devoted to National Hot Rod Association drag racing. Pearcy also released a compilation of reworked Ratt and Mickey Ratt songs in June 2005 called Rat Attack that included spots from ex-Dokken guitarist George Lynch and former L.A. Guns axeman Tracii Guns. After touring with W.A.S.P. and L.A. Guns earlier in 2005, Pearcy he appeared on VH1 Classic's Metal Mania Stripped tour along with Kip Winger, Jani Lane of Warrant, FireHouse, and Don Dokken. His acoustic version of the Ratt song "Round and Round" appears on the VH1 Classic Metal Mania Stripped Volume 2: The Anthems CD. Top Fuel Records is now associated with the Cleopatra label and continues to release material from Pearcy as well as find new upcoming talent. Top Fuel Entertainment is developing a funny car dragster with driver James Day.On October 6, 2005, Pearcy posted a message on his website denying rumors of a Ratt reunion. Even so, a Los Angeles Daily News article published on October 9, 2005 quoted Ratt drummer Bobby Blotzer saying that the band was "very close" to reuniting with Pearcy. However, Blotzer posted a message later that day on Ratt's website stating the interview was out of date and inaccurate.On December 1, 2006 the website "Metal Sludge" reported that Pearcy and Juan Croucier might re-unite with Blotzer and Warren DeMartini and will thus, Robbie Crane and stated that John Corabi will most likely stay with the group.In March 2007 it was announced that Ratt would take part in the "Rocklahoma" summer festival in Pryor, Oklahoma, with original lead singer Stephen Pearcy but without original bassist Juan Croucier, who decided not to participate in the reunion tour.The three remaining members, Pearcy/De Martini/Blotzer, toured alongside Poison in 2007 for a very promising future. The band has since toured the world in 2008; Japan, Spain, Europe, Australia, and many other countries.On April 1, 2007, hip-hop artist, KRS-One released the rock-rap single 'We Will Rock You'. Pearcy featured on the single's B-side track 'Round & Round'.Pearcy collaborated with The Donnas on a remake of the Ratt mega hit "Round and Round", which is included on the U.S. release of Pearcy's third solo album, Under My Skin. July 22, 2008 on Airline Records/Top Fuel Records.On May 3, 2011, Pearcy announced Suckerpunch as the title of his new solo album. The CD's first single, "Don't Want To Talk About" will be released digitally via iTunes on Tuesday, May 3. Pearcy will hit the road in June 2011 as part of the "Metal In America" tour with his new solo band. The new line up consists of drummer Greg D'Angelo (ex-White Lion, Anthrax), guitarist Greg Walls (ex-Anthrax), bassist Mike Duda (W.A.S.P.), and guitarist Erik Ferentinos (Antidivision; signed to Pearcy's Top Fuel Records).On April 24, 2014, it was announced that Pearcy has quit Ratt.

Stephen Pearcy of course is best known as the original lead singer of Ratt, but all over his 45+ year career he has also fronted several short-lived bands, including Arcade, Vicious Delite, Firedome, Crystal Pystal, Vertex and others. As requested, here’s the self-titled and only album he recorded in the Nineties with VERTEX.After Arcade, Pearcy formed VERTEX in 1995 with excellent guitarist Al Pitrelli (Savatage, Alice Cooper, Danger Danger, Great White), and oriental drummer / electronic producer Hiro Kuretani.At the time, Pearcy wanted to do something different musically, also Pitrelli. The ‘industrial metal’ sub-genre was the ‘new thing’ at the time, and they met Kuretani who was an expert in electronics. The result was “Vertex”, an album mixing aggressive vocals, abrasive guitar riffs/solos, and pulsating beats.This musical style is far from what we feature here in this website, however “Vertex” not only is interesting or a curiosity to explore Stephen Pearcy’s rare facet, but also to listen to something refreshing.While some songs are quite experimental, others are very commercial. ‘One Like A Son’ as example, is a really good tune! Overall, the music on “Vertex” has a dramatic, dark, and sometimes turbulent sound to it. When hearing Stephen’s voice it sounds to me like he was voicing different characters in a (mature viewing) feature length animated movie. In ‘F.T.W.’ for example there is something about his voice that reminds me of a Humphrey Bogart gangster movie.In fact, the recording is a concept album with a single narrator, chain of events and re-occurring characters.Vertex was compared with the first Nine Inch Nails, however we disagree. NIN’s Trent Reznor play minor chords which give his music a depressing feel. The Vertex cd is mostly upbeat, using mostly major metal chords.Alongside guitar, Pitrelli also played keyboard and bass, but legend Bob Daisley recorded bass on tracks “Time and Time” and “Ain’t Gonna Be”. Bassist Robbie Crane (Vince Neil Band, Black Star Riders) was a touring bassist for Vertex, but was not on the band’s album.One of our favorite tracks here is the almost hypnotic ‘Time and Time’, another good one, where Pearcy’s voice brings to mind Alice Cooper. Also Pitrelli guitar work is captivating, at times adding rare effects creating atmospheres, at others a pedal to the metal full-on distortion. He drops some very good solos all over the record too.While not for everyone, “Vertex” is worth to check out to discover Stephen Pearcy’s are side – also Pitrelli’s – doing industrial rock/metal. The album was released in 1996 and shortly after Pearcy re-joined Ratt, hence Vertex disbanded.Rare, interesting stuff.