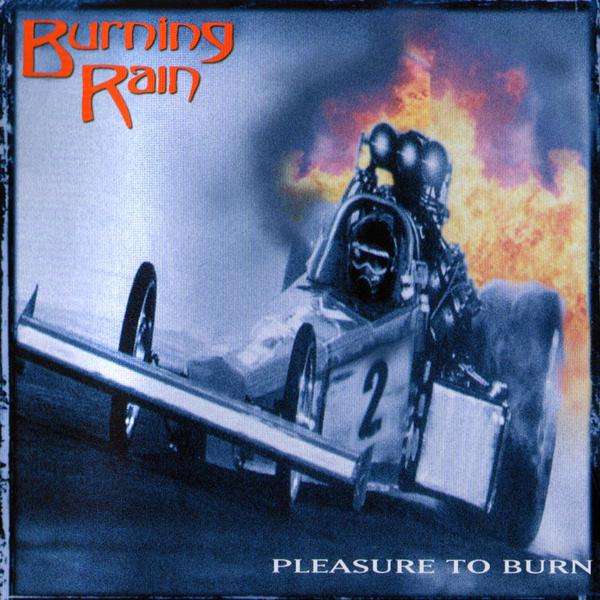 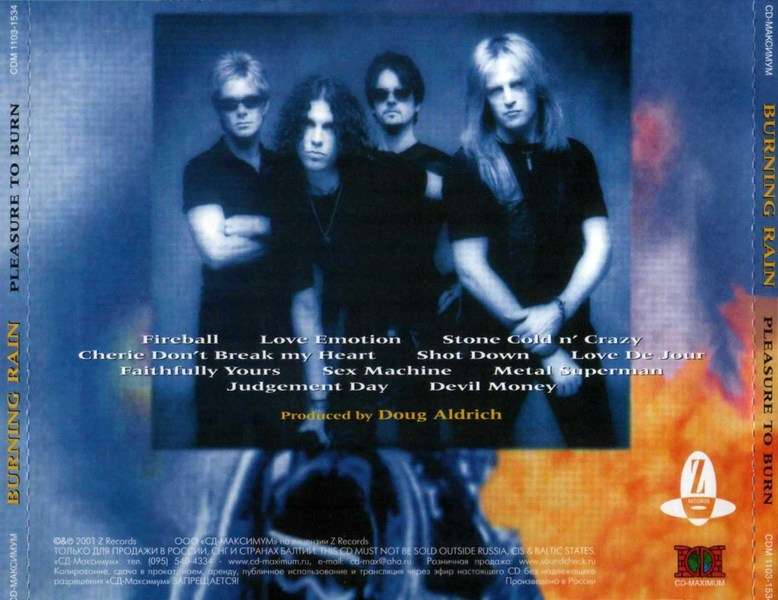 Pleasure to Burn is the second studio album by hard rock band Burning Rain. It was released in 2000 on Pony Canyon. It is the last album with Ian Mayo on bass guitar and Alex Makarovich on drums. The band was on hiatus after touring.Formed by guitarist Doug Aldrich and vocalist Keith St John back in 1998, Burning Rain recorded two well-received albums – their self-titled debut and ‘Pleasure To Burn’ – before the six-string slinger left to team up (albeit briefly) with the late, great Ronnie James Dio, while the vocalist pitched his tent in Ronnie Montrose’s camp.Shortly after jumping ship from Dio to team up with another legendary vocalist David Coverdale, Aldrich actually signed a deal with the latter’s label, Frontiers, to release a third Burning Rain album: however, Whitesnake kept the guitarist so busy that the project never saw the light of day – until now…So, let’s go back to the beginning of the Burning Rain story as, to mark the release (after a nine year delay) of ‘Epic Obsession’, Frontiers also are simultaneously re-issuing the aforementioned pair of archive albums, both remastered and with two bonus tracks on each.The eponymous debut is a not untypical late 1990s hard rock album, from the opening funk-fuelled ‘Smooth Locomotion’ through the sleazy strut ‘n’ swagger of ‘Jungle Queen’ (which lies somewhere between Guns N Roses, Dokken and Tesla) to the Whitesnake-evoking smoothness of ‘Making My Heart Beat’ and the sauntering ‘Can’t Turn Your Back On Love’, the pompous swing of ‘Cherry Grove’ and the helter-skelter joyride of ‘Can’t Cure The Fire’. Showcasing his skills to stunning effect throughout, Aldrich pulls off some truly incandescent solos on the likes of ‘Jungle Queen’, ‘Fool No More’, ‘Can’t Cure The Fire’ and ‘Tokyo Rising’, while St John’s vocals have a lush richness that very much echoes Coverdale at his finest. The two (acoustic) bonus tracks are worthy added-value extras to this superb, highly-overlooked classic.Sophomore opus ‘Pleasure To Burn’ very much picks up where its predecessor left off; while in places it does sound a bit more rushed – possibly to build on the momentum from the first album – it nevertheless is a logical successor in every department, with both Aldrich and St John in fine form. While the comparisons to Coverdale are still extremely obvious (and more so Robert Plant on this opus), especially in the bluesy undertones of the again huge vocal performance, there is also a heavy reference to the likes of Van Halen this time around: just check out the beginning of ‘Stone Cold N Crazy’ (which, after the suitably fiery ‘Fireball’ and the bombastic ‘Love Emotion’, rounds off the album’s suitably frenetic opening section) to see what I mean!‘Cherie Don’t Break My Heart’ is pure ‘Snake through and through, combining the dirty blues of a decade earlier and the slick commercialism of Coverdale’s contemporary output, albeit let down a bit by its Rick Springfield-esque chorus. But that’s a mere prelude for the giant of a track that is to come – ‘Shot Down’ is classic sleaze-meets-melodic hard rock, with a growling, grunting performance from Aldrich’s shotgun blast-blasting guitar and St John on totally stunning form with a vocal guaranteed to make women go weak at the knees and grown men cry with admiration. And then they only go and follow it with the (snake) hip-shimmying bump ‘n’ roll of the luscious ‘Love De Jour’, to make a duo of powerhouse dancefloor fillers, and ‘Faithfully Yours’ – the sort of ballad Eric Martin or Mike Tramp wish they could call their own.The problem with ‘Pleasure…’ comes in its final third, which is extremely disappointing in comparison to what has come before. While the musicianship, especially Aldrich’s highly evocative guitar work, remains superb, the likes of ‘Sex Machine’ and ‘Metal Superman’ have the word “rushed” written all over them, especially on the lyrical front, something which is highlighted even more on ‘Judgement Day’ – a pleasant enough acoustic-led number, but St John tries just too hard to emulate Robert Plant to the extent that it almost verges on parody… although closer ‘Devil Money’, despite a shaky start, does go some way towards redeeming matters, while the acoustic version of ‘Cherie…’ included on this re-issue is beautiful in its mournfulness.