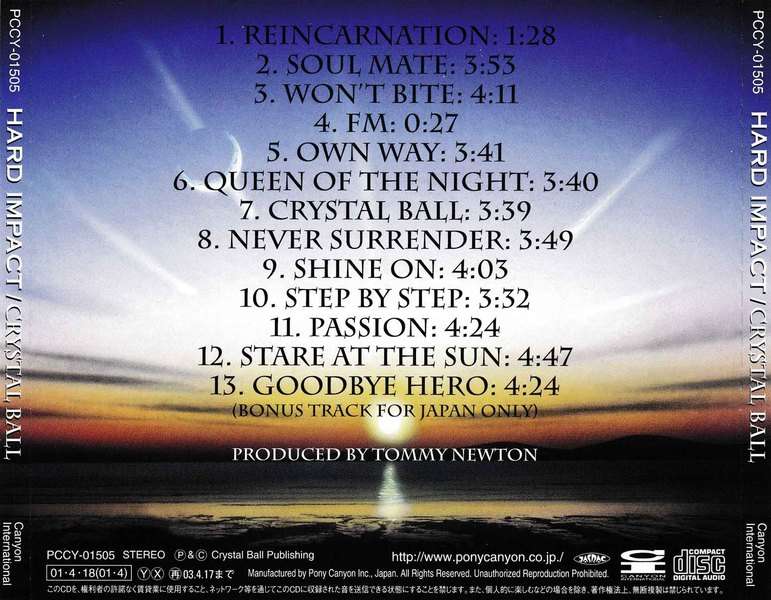 In the summer of 1995 Crystal Ball started out primarily as a cover band. Since then Crystal Ball has opened for many big rock acts like Gotthard, Victory, Bonfire, Pink Cream 69, Manfred Mann, Transit, Krokus, Jaded Heart, a. m.In the spring of 1997 they got to present their first original song "Stand by Me" for the "biggest talk show German television. The single was made for promotional use only. The producer was none other than Angi Schillirô (Zero, ex-Kingdom Come,ex-China).In March 1998 the band had the opportunity to write a championship-song for the international boxer "Stefan Angehrn" from Switzerland. The single "Eye to Eye" was produced by Tommy Newton in Hanover (Germany) and was released in September 1998.During the summer of 1998 the band recorded their first full length CD at the Area 51 Studios in Hanover. Again they worked with Tommy Newton, who has worked with bands such as Helloween, Victory, Scorpions, Conception, Headcrash and Elegy. In a period of ten weeks they recorded an album featuring a wide variety of hard-rock styles on ten tracks. It's Called: „In the Beginning.In November 1998 Crystal Ball got signed by Zero Corporation from Japan, who released the album all over Asia in February 1999.The Japanese-edition featured the bonus-track: „Silence of the night". Their song „Fire still burns" was played in Koh Sakais: „Heavy Metal Syndicate". This was followed by an interview in „Burrn!" magazine. Due to business issues Zero Corporation had to stop its business, and the CD was withdrawn from the market. It was re-released by Toshiba-EMI in September 1999.Point Music from Germany released the album for Europe in April 1999. Just after making the video to "Me and You", Crystal Ball started touring in Switzerland and Germany. They got good album- and live-reviews in important magazines all over Europe like: Breakout, Metal Hammer, Metal Heart, Powerplay and so on. In autumn 1999 they supported Krokus on their Swiss-tour and played even more shows in Germany.From May to July 2000, the band recorded their 2nd album "Hard Impact", again with Tommy Newton. The bonus-track "Goodbye Hero" is exclusively on Japanese edition. "Hard Impact" was released on October 23rd in Europe by Point Music. Just in the first week after the release the album went into the Swiss Top 100. A video featuring "Queen of the night" has been produced, and they did a german/swiss support tour with Pretty Maids in February 2001. The new album makes clear, that the hopes in Crystal Ball are even surpassed by "Hard Impact". The less polished sound combined with improved songwriting, saves the eighties-rock and takes it to the 21st century. The reviews from German Hardrock-magazines are amazing.

If you are missing Bon Jovi first records, Foreigner's best songs, Def Leppard's first masterpieces and wondering if this style was definitively dead, jump on this Hard Impact. From the first minute to the last one, it is an invitation to sing under your shower, to forget all your problems, to place it in your car and turn the volume level at the maximum position. Even if it rains hard outside your car, you will have this "flying feeling" that nothing can hurt you today ... hooopps here comes a truck !!!Those of you who think that last Bon Jovi wasn't very honest, that last Def Leppard's records have been betrayal to the melodic hard rock style, don't worry Crystal Ball's Hard Impact is the kind of CD drug you need. From Queen of the Nights ("à la" Pink Cream), Never Surrender or Step by Step ("à la" Jaded Heart), Passion or Crystal Ball (fast songs), Soul Mate (whooaaawww!), FM (another whoooaaawww!), to Shine On or Won't Bite (both reminding me Foreigner), Crystal Ball serves us 10 songs, 10 killers, 10 knock-your-brain songs, one better the other.Perfect ... simply perfect. If you are a fan of Pink Cream, Jaded Heart, Foreigner, Def Leppard or Shakra run as fast as you can to the nearest metal store. And if you fall in love with this Hard Impact, here comes a small piece of advise for you : this is their second record and the first one (Crystal Ball) is as good as this one. Have a Crystal Ball day my friends !!!