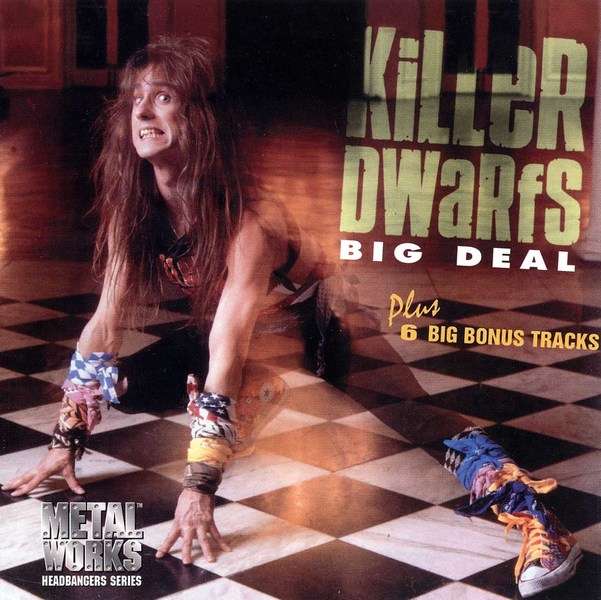 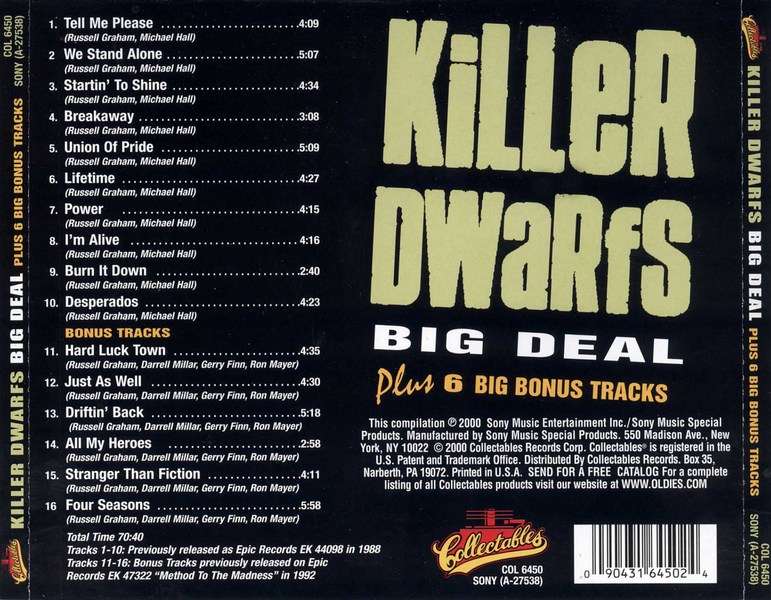 Killer Dwarfs (stylized as KiLLeR DWaRfS) are a Canadian heavy metal band who formed in late 1981 in Oshawa, Ontario, and who enjoyed moderate success in their native Canada in the 1980s. Known for their offbeat sense of humor (all band members adopted the surname "Dwarf"), they were nominated for two Juno Awards during their career. Though not British, they were sometimes compared to NWOBHM acts such as Iron Maiden and Saxon.The original lineup consisted of Russ Graham (vocals), and Darrell Millar (drums), along with Bryce Trewin (guitar) and Ange Fodero (bass). Their self-titled 1983 debut album was nominated for a Juno Award and radio stations in the US, particularly in Texas, started to play their album.Trewin and Fodero left the band shortly afterward, and were replaced by guitarist Mike Hall and bassist Ron Mayer. This classic lineup released the band's breakthrough 1986 album, Stand Tall, followed by Big Deal in 1988 and Dirty Weapons in 1990. The band received much recognition in Canada and the United States during the 80's, and their videos were in regular rotation at MuchMusic and on the MTV program Headbanger's Ball. Gerry Finn replaced Hall in 1992, and the album Method to the Madness was released later that year.The band toured for several years but then parted ways. During the mid-to-late 1990s, the band members pursued other projects. Graham formed a band called PennyBlack, and Hall and Finn both became members of the legendary Canadian metal band Helix. Millar went on to drum for the southern rock band Laidlaw, before forming his own Bon Scott era AC/DC tribute band Autobon, which went on to become Automan.ca, where Millar recorded original material. Mayer became a businessman and moved to the U.S. In 2001, however, the lineup of Graham, Millar, Hall and Mayer reunited to tour across North America. Recordings from these shows make up the live album Reunion of Scribes: Live 2001. The band again went on hiatus until 2013, when Graham, Millar, Finn and Mayer released a previously recorded album Start @ One that was recorded in 1993 but never released. Also in 2013, Graham released Wireless, in which he sings acoustic versions of popular Killer Dwarfs songs with guest musicians.On May 26, 2014, the band was returning home after concluding a US tour at the Rocklahoma festival in Pryor, OK. While passing through a construction zone along Interstate 70 in Indiana, the band's pickup truck, driven by Fenton, struck two other vehicles and crashed into a ditch. Graham was airlifted to a hospital in Terre Haute where he received 24 stitches to close a gash on the left side of his forehead. The rest of the band walked away with cuts and bruises. In a radio interview a month later, Graham said he was healing well, but the area around the gash was still completely numb.On January 5, 2018 it was announced that Killer Dwarfs had signed to Megadeth bassist David Ellefson's EMP Label Group, who would release a live album, NO GUFF', on Friday, April 13th, as well as reissuing the bands independently released START@ONE and vocalist Graham's solo debut Wireless, plus new 2019 studio LPS from Killer Dwarfs and Russ Dwarf.

Third album in reissue with 6 bonus tracks.Hailing from Oshawa (a burb around the metropolis of Toronto), the band had moderate success in Canada in the eighties.This is the band’s third album which came out in ’88, and although the band were known as a metal band, this album is much more of a melodic rock album (even I would say power pop), especially on tracks like We Stand Alone which is very Cheap Trick sounding. Startin’ To Shine is one of the best tracks on the album, as it has a great groove and hook and some really nice guitar. To keep their metal credentials intact, the deliciously heavy and fast Burn It Down is my favourite on the album. This album does sound a bit flat, as when they these songs Live they are a lot more alive and popping.This is a band that released a string of well-received albums after their self-titled debut in 1982: “Stand Tall” in 1986, “Big Deal” in 1988, “Dirty Weapons” in 1990, and “Method To The Madness” in 1992. Still, I wasn’t quite sure what to expect from a Killer Dwarf flashback to the 1990s, but any doubts I had were quickly put to rest as I listened to this album. This is a solid, hard-hitting release from the band, delivering some strong material with a genuine, old-school flavor.