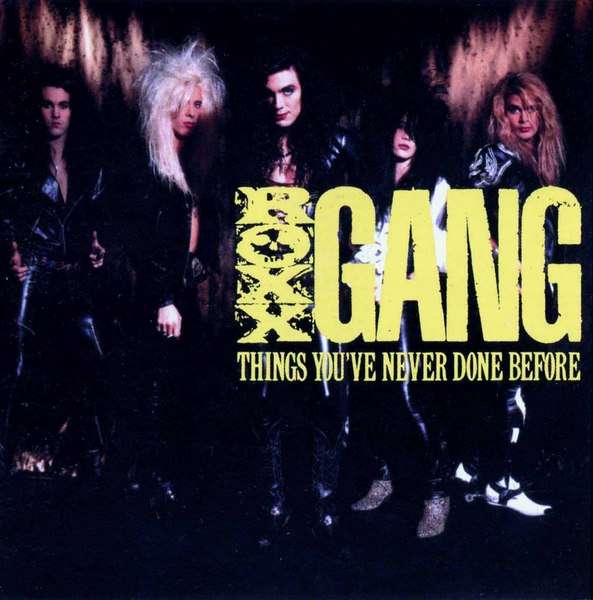 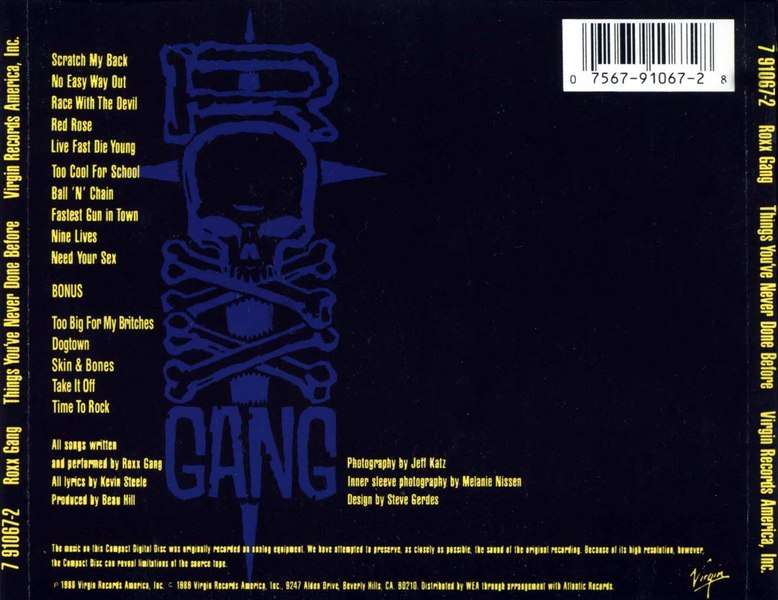 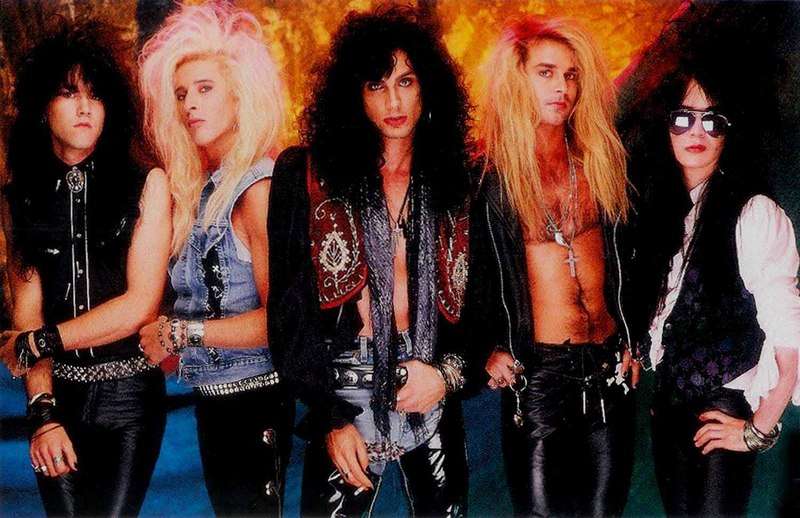 Roxx Gang was an American glam-metal band formed in 1982 in St. Petersburg, Florida. Auditions and rehearsals were held at Rockin' Studio 66, a local rehearsal/recording studio owned by area musician, Mike Abdishi.The band garnered record company attention in 1987 with its Love 'Em and Leave 'Em demo. The band recorded its debut album Things You've Never Done Before (1988) on Virgin Records from which it released two singles "No Easy Way Out" and "Scratch My Back" with the lineup now consisting of Steele, Jeff Taylor Blanchard (guitar), Wade Hayes (guitar), Roby "Strychnine" Strine (bass), and David James Blackshire (drums). It was produced by Beau Hill and went on to sell a quarter million copies worldwide.This version of the band broke up in 1991 because of infighting and record company issues. Steele then formed a new version of the band along with Roby Strine, guitarist Dallas Perkins and professional session/touring drummer Andy James from NYC. Years later drummer Tommy Weder and guitarist Stacey Blades replaced James and Perkins. Strine left in 1994 and was replaced by Dorian Sage. The band released the album The Voodoo You Love, its first album since Things You've Never Done Before, and went on to release several more albums in the late 1990s. The band added guitarist Jeff Vitolo and bassist Vinnie Granese replaced Sage. Soon after Roxx Gang created a blues/rock alter-ego The Mojo Gurus. Blades left citing "musical differences" after which evolution into The Mojo Gurus became permanent.In 2006, two of its songs off of the Things You've Never Done Before album, "Ball 'N Chain" and "No Easy Way Out" were featured in the THQ action-adventury video game Saints Row.

Things You've Never Done Before is the second studio album by American music group Roxx Gang, released in 1988.Glam hard rockers ROXX GANG major label debut album 1998’s “Things You’ve Never Done Before“. The album was reissued / remastered in 2000’s.Well, this is a rare CD reissue including that remastered audio plus 5 bonus tracks, rare singles and songs from their first indie recording. While isn’t an official reissue this is a professionally made, silver pressed CD and the quality is top notch, both in audio quality and the complete booklet.Roxx Gang was a band that I had heard of forever, but never attempted to track down any of their stuff.It’s a shame that band fell apart in the face of the looming alternative movement because they’re definitely a band of solid sleaze rockers. I guess they just came in too late to really make a difference and cement themselves.After making waves with their Love’em and Leave’em EP, this was the only full album the band released before breaking up in 1991 (they got back together and released a few albums from 1995-2001). This album did fairly well though, selling 250,000 copies. Pretty good, I’d say. The band went on to sign with Sony’s Epic Records but never made it to the 2nd album thanks to fighting in the band and with the label itself.Definitely a sleaze rock album worth looking into with “No Easy Way Out”, “Red Rose” and the bluesy “Ball ‘N Chain” sticking out as the best material.Highlights: “Scratch My Back”, “No Easy Way Out”, “Red Rose”, “Live Fast Die Young”, “Ball ‘N Chain”, “Fastest Gun in Town”, “Need Your Sex”