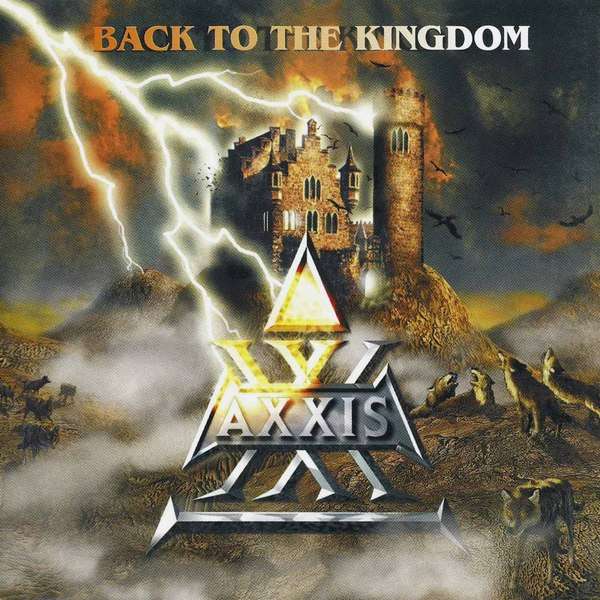 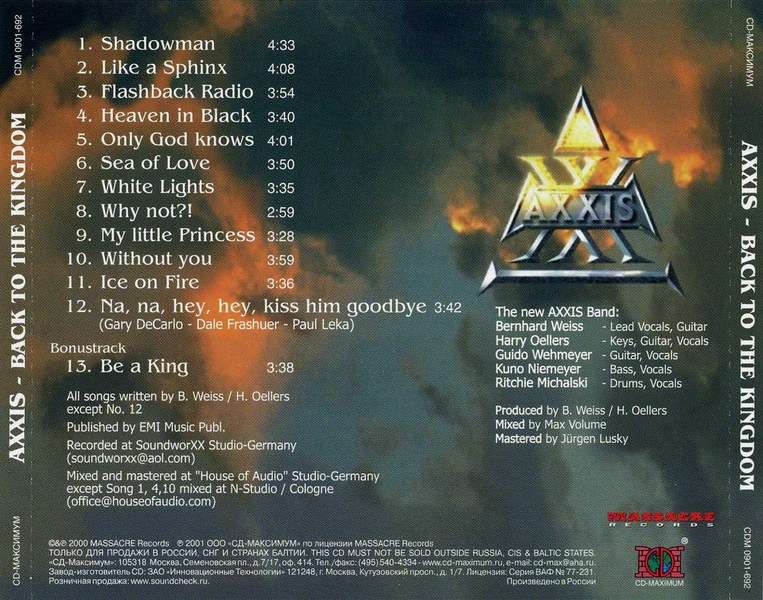 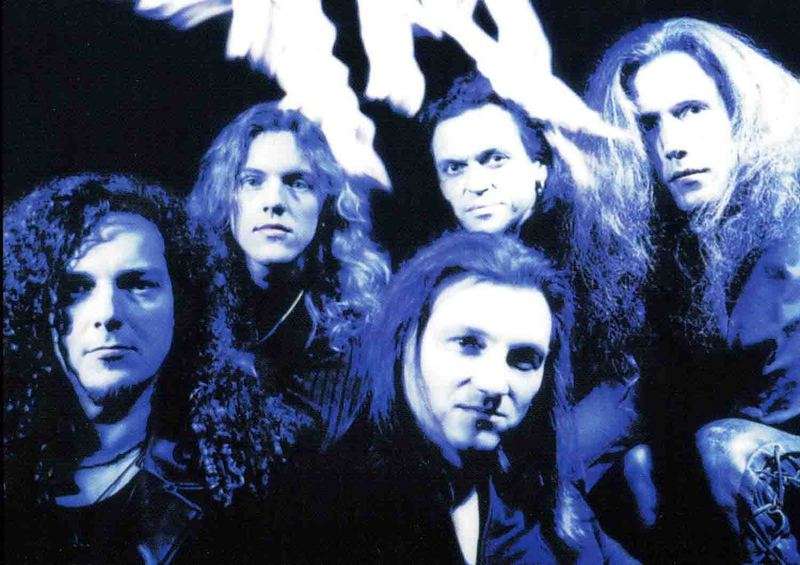 Axxis is a German hard rock band that was founded in 1988. Their debut album, "Kingdom of the Night", became the best-selling debut album ever by a hard rock band in Germany in 1989.Axxis' musical roots lie within the traditional heavy rock of the 70s and 80s including influences of 90s electronic music. Bernhard's unique vocal style is another characteristic trademark of the band. Axxis' major ambition is "to be a pure Rock n' Roll band".Axxis' musical roots lie within the traditional hard rock of the 70s and 80s, including influences of 90s electronic music. The band was formed in early 80s, with the name Anvil. They released several self-recorded demos under that name, before discovering the Canadian band Anvil who had already released an album internationally,In response to this, the band changed their name to “Axis”. In interview with Battle Helm in 2015, vocalist Bernhard Weiß stated that the new band name must be a small word to get bigger letters on the promotional posters, but he also stated that they chose the name because "the name AXIS sounds a bit like guitar axes, but also meaning wise".They recorded a demo entitled “Tears of the Trees” (Later to appear on the Kingdom of the Night album) in 1988. Which they submitted to EMI records several times, and were eventually signed to EMI Electrola. Due to an EMI subsidiary in Germany also named Axis, the band introduced a second X in their name, becoming “Axxis”. - At this time, the band consisted of vocalist Bernhard Weiß, guitarist Walter Pietsch, bassist Werner Kleinhans and drummer Richard Michaelski.Axxis then released their debut album, Kingdom of the Night in 1989. This album was released in Europe, Canada, Japan, Australia and the USA, and sold 100.000 copies immediately.It became 1989’s best selling debut album by a hard rock band in Germany. Axxis toured to promote the album, opening for such bands as Black Sabbath.In 1990, Axxis released “Axxis II”, which achieved similar success. Keyboard player Harry Oellers was added for the album. The album also contained the single “Touch the Rainbow” and the fan-favourite “Little Look Back” (later to become an anthem in their live shows), and was followed by “Access All Areas” in 1991, the first live album by the band.The band then released The Big Thrill in 1993. Produced by Joey Balin and recorded in Philadelphia, it was the first international production by Axxis. The album became a best seller in 1993. It was promoted by the band in various shows, including in Japan, where acoustic performances by Weiß and Pietsch would later be included in “Profile – The Best of Axxis”, a 1994 Japan-only release.Axxis continued to record in America for their next album “Matters of Survival”, and had Keith Olsen to produce it. Axxis originally wanted Olsen to produce their previous album “The Big Thrill”, but Olsen declined due to time restraints.Weiß later implied that Olsen tried to change the band’s sound from heavy metal to alternative, which was trending at that time. - Matters of Survival was released in 1995, and fans rejected it due to the change in sound. Weiß admitted later this album was “not metal enough”.Axxis continued to play with a modern rock style in their 1996 album, Voodoo Vibes, the last album they recorded under EMI. - Axxis then parted ways with long-time guitarist Walter Pietsch. According to Weiß, Pietsch choose to be a producer, and has since become a well-known producer in Germany.Axxis then signed with Massacre records in 2000 to record the album “Back to the Kingdom”, with a name implying the return to their classic heavy metal sound. The new album was received well among fans, and the followed up in 2000 and 2001 with the compilation album “Collection of Power” and “Eyes of Darkness”.Bernhard Weiß’ unique vocal style is significantly characteristic trademark of the band, and he (along with Oellers) has been Axxis’ most constant member, featuring in the band from 1988 to present. Over time Axxis have adopted an increasing amount of both classic and modern power metal into their sound, this is significantly heard in future albums Time Machine (2004), Paradise in Flames (2006), Doom of Destiny (2007) and Utopia (2009).In the band celebrated their 20th in 2011 anniversary, releasing “20 Years of Axxis” on their publishing company “Phonotraxx”. The anniversary production was an official bootleg live recording released on both CD and DVD, the following year they released the cover album “reDISCOver(ed)”, featuring covers of “Ma Baker”, “Stayin Alive”, “My Heart Will Go On! and many more.In 2014, the band returned to their roots similarly to “Back to the Kingdom” with the release of “Kingdom of the Night II” a double-CD release sequel to their debut album. The double-CDs were released as the hard rock oriented “white” and the heavy metal and power metal oriented “black” versions, respectively, with completely different songs on them, and were both sold separately as well as packaged together in a “Deluxe” edition.Axxis celebrated their 25th anniversary similar to their 20th, with the live release of “25 Years of Rock & Power” in 2015. – 2017 saw the release of “Retrolution”, a heavy metal and hard rock oriented album, taking various throwback elements to the bands which Axxis had listened to over the years. The title implies this, word-playing “retro” with “revolution”.

Here, Axxis cleaned up their act and released a very strong slab of melodic Germanism.I have no idea what the original "Kingdom of the night" sounds like, so I can't say if this is a "return to form" after the stupid "Voodoo vibes", or just a marketing gimmick. What I can tell you is that fans of "plain" (i.e. non-pretentious, non-tear jerking) power metal will not be disappointed. This is not a heavy album at all, but a friendly and fun-filled ride, for one of those days when you don't feel like walking around in all-black, painting inverted crosses at your job, school or retirement castle.Bernhard Weiss is a quite cheesy singer, but certainly not unpleasant, and with a good sense of melody. He is also Axxis' lyricist, which is both their weakness and strength here. The lyrics are ridiculously badly written, so much as to sometimes actually ENHANCE the album through their hilarity alone. Most of the time, I have no idea what Weiss is trying to say with his lyrics, though the subject matters don't seem to be demanding enough for that to matter - they're usually about everyday observations, or some flyweight fantasy.How about the anti-grammatical masterpiece "Flashback radio": "It's gonna make me sick, it's all this techno hype, can't hear it anymore, oh, I don't like this vibes!" SIC! This is no joke, the album is loaded to the brim with pearls like this. It's also humourous in another way, because if you read my review for "Voodoo vibes", you'll see that Axxis actually was a techno-wannabe poser band just 3 years prior to this!As for the songs - well, "Shadowman" alone is worth buying the album for, it's that good! One of those rare songs when everything just comes together perfectly - the groove, the melody, the riffs. Not too long and not too short. The lyrics, insipid as they are, also work well here. Even if you don't plan to buy this album, do yourself a favour and check out this song!I also love "Why not?!" and the goofball cover "Na na, hey hey, kiss him goodbye". "Heaven in black" is a very well-crafted half-ballad. Speedy "Like a sphinx" and "Ice on fire" are rock-solid, melodic sing-alongs, as are mid-tempo tracks "Sea of love", "White lights", "My little princess" and "Be a king" (digipack bonus).They really focused their aims on this album, compared to "Voodoo vibes", where every song tried to be several things at once - both ballad and rocker, or ballad and disco. Here, the rocking songs don't try to be anything other than straight ahead rockers, and it works much better.There are a few ballads here too, and they drag down the momentum a bit. However, I have to say the same thing about them as about the rockers - they are more focused than before (even if they ARE just ballads).Melodic power metal at its finest, and not in the least pretentious, pompous or overblown.Favourite songs: "Shadowman", "Why not?!", "Heaven in black", "Na na, hey hey, kiss him goodbye", "Ice on fire"