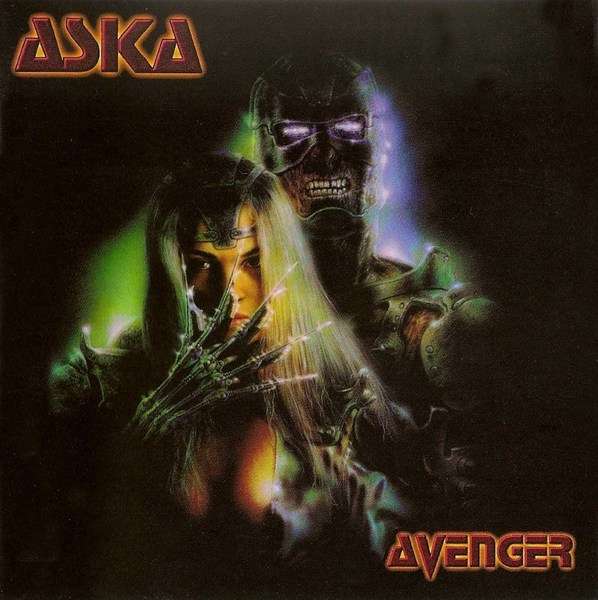 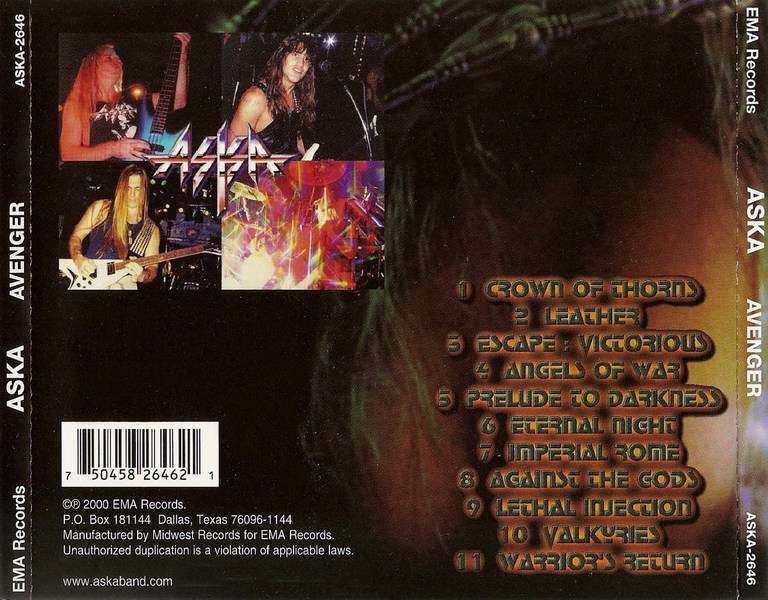 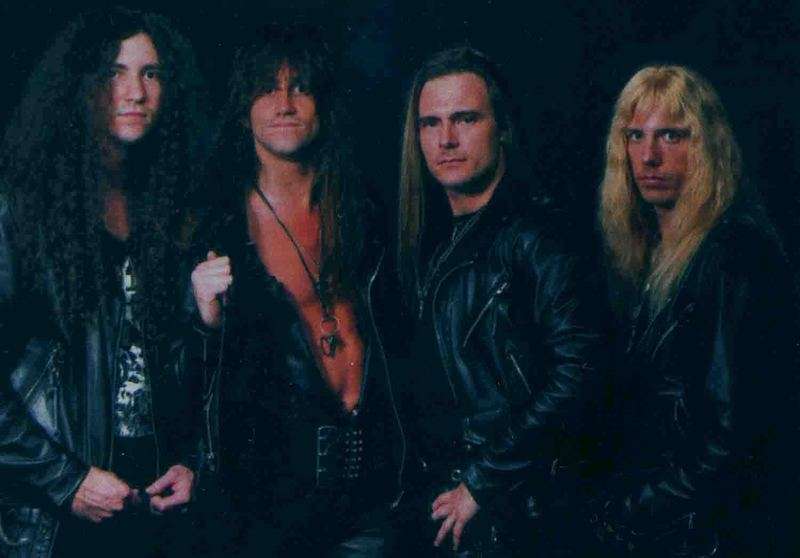 Traditional/Power Metal in the vein of Judas Priest, Iron Maiden & best in genre.ASKA; What more can we possibly say regarding this perennial favorite "underground" band that hasn't been touted already from rooftops across the electrified globe?For the uninitiated: ASKA is born during the nascent alternative/grunge movement of the early 90's and eschews the popular fad in favor of playing metal music…their way. From the first release to their fifth, the band embarks on a variety of world tours that would be the envy of better established acts and nets them notoriety,credibility,independent record company contracts, financial gain, and 40 countries notched on their belts to date and counting. Impossibly the band's songs are added to HARD RADIO playlists - without benefit of label support- and the intrepid muses follow blow-for-blow with what can only be described as an unheralded classic of true-metal majesty; "Avenger". Critics and fans of the genre raise their fists in the air and hail. With the release of their "Absolute Power" album, the band proves that what they'd put forth on "Avenger" was no fluke and take things a step further. In fact, "Absolute Power" is so well received within the metal community that legendary metal bands, Omen, Banshee and Cloven Hoof offer singer/guitarist George Call a position as their lead vocalist. Metal Gods and fans, both past and present, find worthy brothers-in-arms in ASKA. Their ways have not been forgotten but are indeed carried on with pride and finesse by this Dallas based construct of metal passion and fury. At this writing, ASKA readies their forthcoming sixth album, "Fire Eater", for release in 2013. Hail them without question as they fight their way to the great hall of champions and take their rightful place among the new defenders of the faith.

Many know Aska as a band that toured with the US Department of Defense, most recently sharing poster space with Five Finger Death Punch, Kid Rock, and Hellyeah. In the land of this sort of blindness, the man with one eyelash is king. But you'll be pleased to know Aska isn't really from this land at all. Instead, they've made a career out of passable USPM and at the turn of the millennium, provided something of a respite for Iron Maiden fans who weren't fond of such classics as 'The Angel and the Gambler'.Avenger covers all of the bases you'd expect from a traditional heavy metal album for the new millennium. There's the vaguely Christian anthem 'Crown of Thorns', immediately followed by the S&M love song 'Leather', the unnecessary piano interlude that you'll always skip, and the rest is more war than Warbringer's 'Total War' from War Without End. Though, oddly, none of these tracks have much in the way of punchy aggression you might expect. 'Angels of War', for instance, is a mid-paced rocker with more emphasis placed on technical fretwork. Aside from very Maiden-influenced twin guitar solos, the Angels seem more like conscientious objectors.But despite the docile sound from a decidedly squeaky production, I wouldn't say guitarists Darren Knapp and George Call are slouches. The aforementioned guitar solos are doled out like candy from the most decorated house on Halloween, with 'Crown of Thorns' and 'Lethal Injection' both managing the most intricate examples. On top of this, their riffs gallop as if their lives depended on it, and they explore an accessible array of meaty chords for choruses. But these choruses also typically feature harmonized battlecries, and all of this might be setting off your 'Manowar' alarms.Aska at least seems to have a charming lack of self-awareness for this, which is something of an anesthetic. I have no choice but to admire moments like in 'Imperial Rome', where Call simply starts shouting names of emperors for no reason, like he's reading Plato's address book. It's such an absurd interjection that suddenly interrupts the story he was telling. It's brilliant. As for the singing itself, Aska's official website claims Call has a range of five octaves. To put this in much-needed perspective, Freddie Mercury was said to have 'almost five'. So, sadly, I lack the grisly head injury required to believe Aska's claim, and even if Call does possess such a range, he certainly didn't utilize it in any part of this album. Competent and predictable are two far more accurate descriptors.As a convenient segue to wrap things up, I would say Avenger in its entirety is also competent and predictable. Nothing more, nothing less. If you're having trouble seeing the 'more' part, just pretend you're a soldier and have the choice between this or Kid Rock.