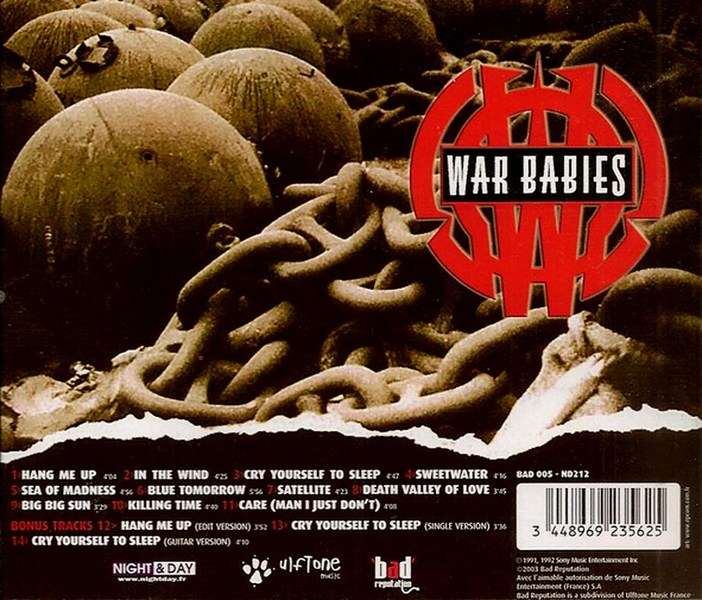 War Babies was an American rock band formed in Seattle, Washington in 1988 fronted by former TKO vocalist Brad Sinsel. Although associated with hard rock, the band's sound incorporated some elements of grunge music. They only released one album in 1991, the self-titled War Babies.After the break-up of TKO, vocalist Brad Sinsel and guitarist Rick Pierce (ex-TKO, Q5, Ze Whiz Kidz) teamed up for a project called Suicide Squad, aided by well-known Seattle drummer Richard Stuverud who had played with punk rock band The Fastbacks and was working with the power metal band Fifth Angel. They released the one-off Live it While You Can EP, engineered by Jack Endino, on the Music For Nations label in Europe in 1988.After Suicide Squad, Sinsel spent time in Los Angeles but was eventually contacted by Stuverud to check out his new band War Babies with guitarist Tommy 'Gunn' McMullin who lacked a vocalist at the time. Sinsel was persuaded to join and the band began to gig around the Seattle area where they played with popular local bands like Mother Love Bone, Alice in Chains, Soundgarden, and others. In 1990, at the time of Andrew Wood's death and the end of Mother Love Bone, Jeff Ament joined War Babies but soon left again to join Stone Gossard's new band Pearl Jam.Soon after, the band scored a contract with Columbia Records and proceeded to record their debut album at A&M Studios in Hollywood, CA with noted producer Thom Panunzio and engineer Bill Kennedy. However, Columbia were trying to lure Aerosmith away from Geffen and delayed the release of the War Babies album. After not being able to sign Aerosmith, Columbia tried to make "their own Aerosmith" with War Babies and finally in 1992, the album was released featuring the line-up of Brad Sinsel (vocals), Tommy McMullin (guitars), Guy Lacey (guitars), Shawn Trotter (bass), and Richard Stuverud (drums).Their first single and MTV video, "Hang Me Up", was co-written by McMullin and Paul Stanley of Kiss. Two other singles were released, "Blue Tomorrow" (a song dedicated to Andrew Wood, who was a friend of Sinsel and McMullin's), and the power ballad, "Cry Yourself to Sleep", co-written by Sinsel and Stanley.The song "In The Wind" can be heard in the 1992 film Buffy the Vampire Slayer but was not included on the official soundtrack.However, War Babies' sound was deemed too glam metal for that time, leading to their breakup in 1993. The band played their last show on June 6, 1992 as part of the "Rock the Environment" benefit with headliners Queensryche, Heart, The Walkabouts, Metal Church, Bananafish, and Rumors of the Big Wave, among others.After the breakup, McMullin started the band The Dead Letters while Lacey and Trotter formed 8 Days In Jail and later joined Seattle punk rock band Sledgeback. McMullin has been fronting Gunn and the Damage Done for the past several years; they released their debut album, Bury My Heart, in 2010.Stuverud would join and record with several Seattle bands, the most notable being Three Fish, a side project featuring Pearl Jam bassist Jeff Ament and Robbi Robb of Tribe After Tribe to whose albums, Pearls Before Swine (1997) and M.O.A.B. (2007), Stuverud also contributed. Stuverud and Ament's latest collaborations include Tres Mts. with Doug Pinnick of King's X and guest guitarist Mike McCready, whose debut album, Three Mountains, was released in 2011,and RNDM (pronounced "random") with singer/songwriter Joseph Arthur; they issued their debut album, Acts, in 2012.Sinsel's recent projects include American Standard with Flipp guitarist Brynn Arens who issued the "Send Me An Angel" b/w "My Only Friend" single in 2009, Americana act The McClellans, and Angels Of Dresden. The latter released a digital single, "Doomday", via Suna Sounds in May 2014, with a guest appearance by Pearl Jam guitarist Mike McCready.

War Babies is the debut and final album by the band War Babies, who disbanded in 1993. The album was released by Columbia Records in 1991 and re-issued by German label UlfTone Music in 2003 and French company Bad Reputation in 2007, respectively.“War Babies“, the major label debut and from WAR BABIES digitally remastered by Bad Reputation Records, one of the label’s first releases under this new name, previously known as Axe Killer.Released in 1992, “War Babies” appeared too late into the melodic hard rock scene when the musical climate was already changing in favor to the depressive grunge, and the group disband next year. Ironically, WAR BABIES hailed from from Seattle.But it doesn’t matter their headquarters, WAR BABIES delivered here a killer melodic hard rock record driven by crunchy guitars and class vocals courtesy of former TKO vocalist Brad Sinsel. There’s 2 songs co-written with KISS’ Paul Stanley, and the production of Thom Panunzio (Joan Jett, Alice Cooper, Deep Purple) is huge. A monstrous album ala Hardline, Wildside, Roxy Blue, etc.The Bad Reputation remastering job is excellent, adding 3 bonus tracks.