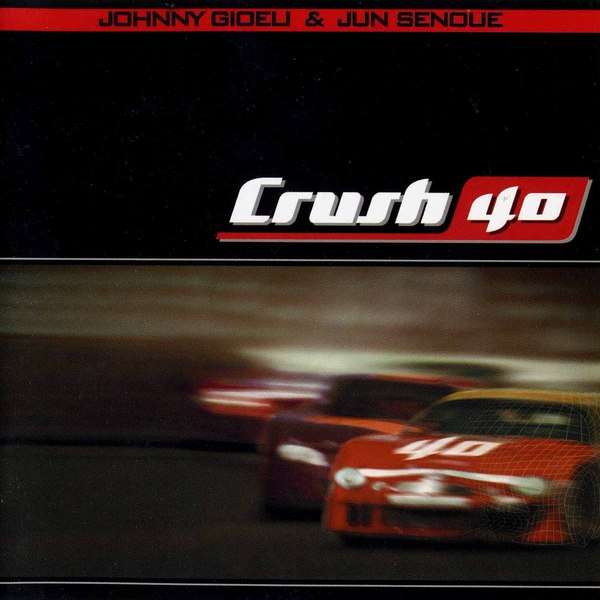 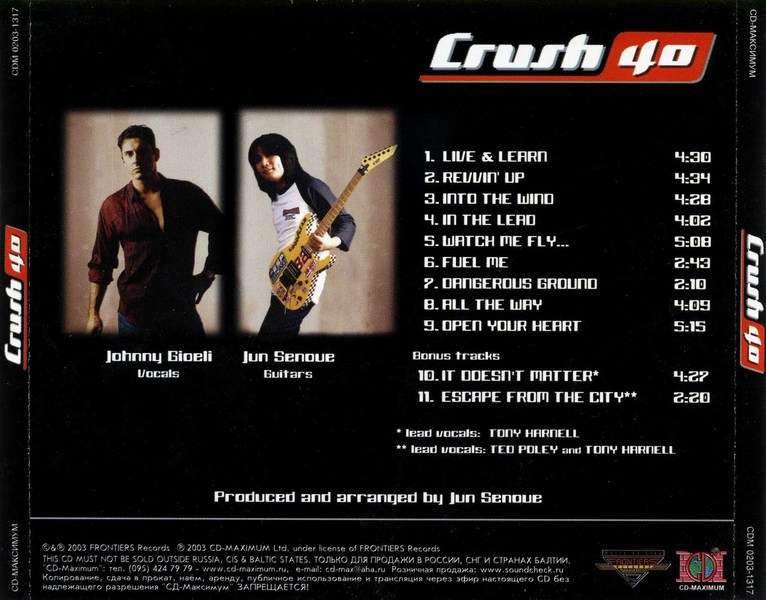 Crush 40, originally a project created to make music for NASCAR Arcade, permanently consisting of Senoue on guitars, Johnny Gioeli on vocals, Toru Kawamura on drums, and Takeshi Taneda on bass. The band has created several songs from the Sonic the Hedgehog series produced by Sonic Team, such as the theme tune "Sonic Heroes" from the game of the same name, a bright, melodic song and in contrast to "What I'm Made Of...", a distinctly dark, energetic hard rock song with metal sensibilities for the final battle against Metal Sonic. Also notable are "Open Your Heart", the main theme of Sonic Adventure, "Live and Learn", the main theme of Sonic Adventure 2, "I Am... All Of Me", the main theme of Shadow the Hedgehog, the ending theme "Never Turn Back", and "Knight of the Wind", the main theme of Sonic and the Black Knight, as well as the ending theme "Live Life".Additionally, the two have produced a cover of "Seven Rings in Hand" from Sonic and the Secret Rings, which was featured exclusively on the Japanese only release True Blue: The Best of Sonic the Hedgehog. Gioeli co-wrote the lyrics for the Sonic the Hedgehog theme song "His World", and Crush 40 performed their own version of the song, featured as a bonus track on the game's vocal track soundtrack. They also recorded a cover of "Sonic Boom", the main theme of the North American version of Sonic CD, with Cash Cash in 2011.In October 2008, Crush 40 took the stage at the Tokyo Game Show to perform some of their most popular Sonic based songs in front of a live audience for the first time. Gioeli and Senoue have since created a YouTube account and uploaded video footage of the event. In 2009, a new Crush 40 album was released titled The Best of Crush 40: Super Sonic Songs. The compilation contained most of the band's Sonic the Hedgehog releases, as well as a mixture of old tracks from NASCAR Arcade and brand new songs. On August 7, 2010, Crush 40 performed at the 2010 Summer of Sonic convention in London, marking their first full-length performance and first performance outside of Japan.In 2012, the band performed at two conventions, at the Summer of Sonic in Brighton and at the Sonic Boom event in San Diego during the Comic Con. The band released their first live album on October 3, 2012, titled Live!, which featured songs from their concerts in Tokyo. In 2013, the band performed in St. Louis for the Sonic Boom 2013 event.

This CD is a nice collection of high-energy (with maybe one exception) rock songs with a positive message. Sure, some of the lyrics are about car racing, and the songs were made for video games, but so what? The guitar work (Jun Senoue) is good, the vocals (Johnny Gioeli) are good, the backing instrumentation and vocals are adequate, all of which makes for an enjoyable listen. Most of the music here is fast with somewhat of a metal influence, but is positive and uplifting - none of that doom and gloom, angst-ridden BS here! The best songs, in my opinion, are "Revvin Up", "In the Lead", and "All the Way"; other highlights are "Live & Learn", "Into the Wind", and "Dangerous Ground." If these songs don't get you moving, then you are dead from the neck up! Hey, I want to thank those of you who wrote negative reviews for giving me a good laugh; you clowns are a real hoot! Saying "the guitar player sucks" does not constitute a review. (Look up "constitute" in the dictionary, kiddies - it starts with a "c".) Lose your preconceived notions, open your narrow minds, think outside the box for once, and enjoy the music!When the Norwegian band “Sons of Angels” reunited under this alias that they had before,they decided to change their band’s name to Crush 40.When asked why he chose “Crush 40”, he said, “When we had to pick one, we chose the word we like…“Crush” is one of them, and Johnny added the number. Crush is the name of the soda too…that’s my favorite!”.Two years after the release of Sonic Adventure 2, the album Crush 40, a version of “Thrill of the Feel”, was released by Frontiers Records.The album contained the music from their previous album, but without the album’s instrumental tracks. Senoue claimed that Crush 40 was the project of himself and Gioeli. There were, however, both prior Sonic theme songs “Open Your Heart” and “Live and Learn”, as well as two bonus tracks: “It Doesn’t Matter” and “Escape from the City”.