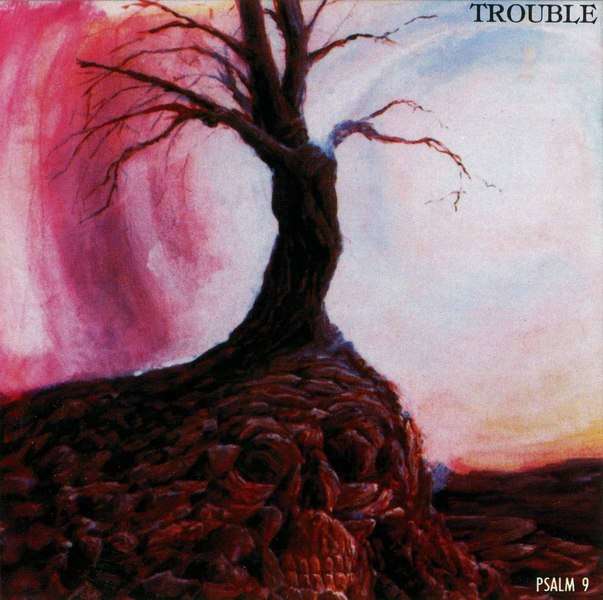 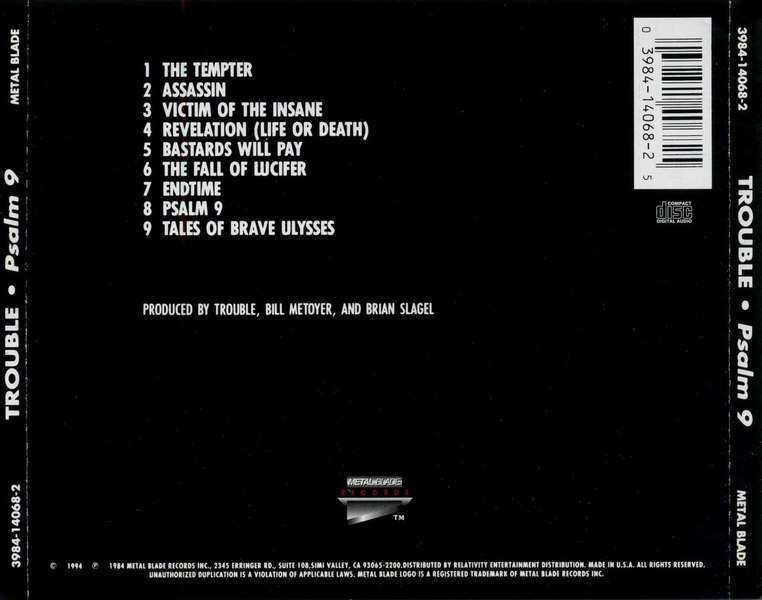 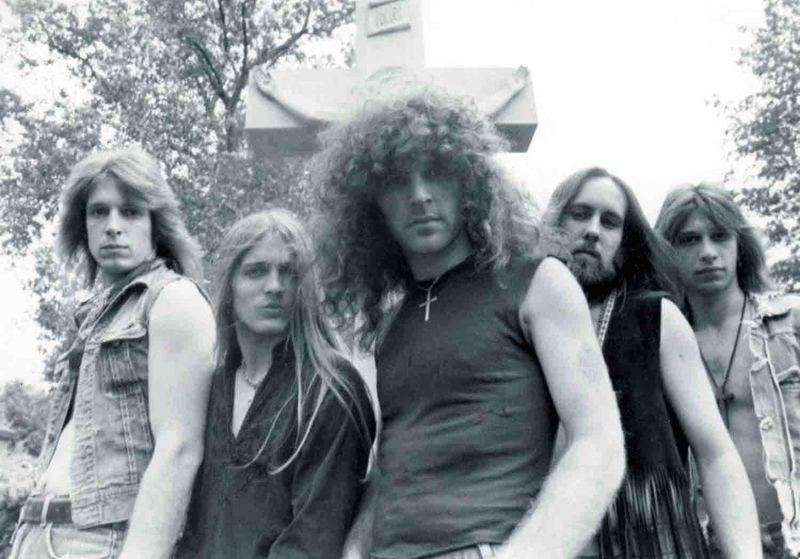 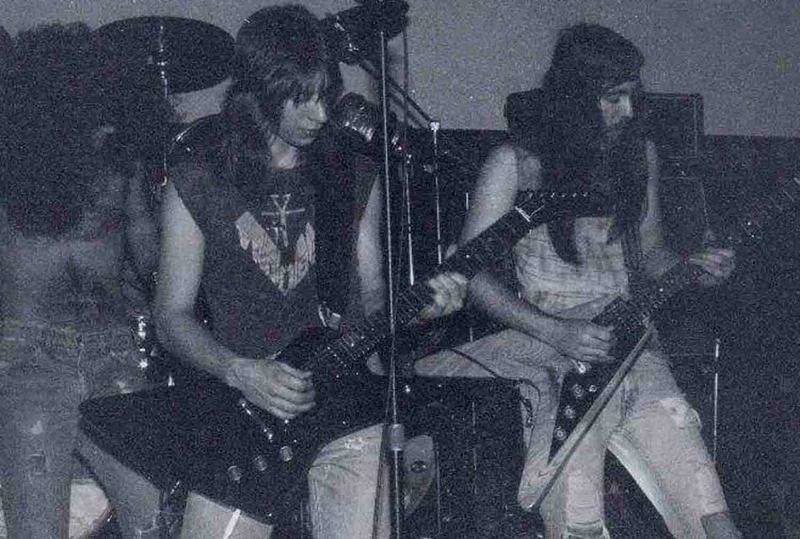 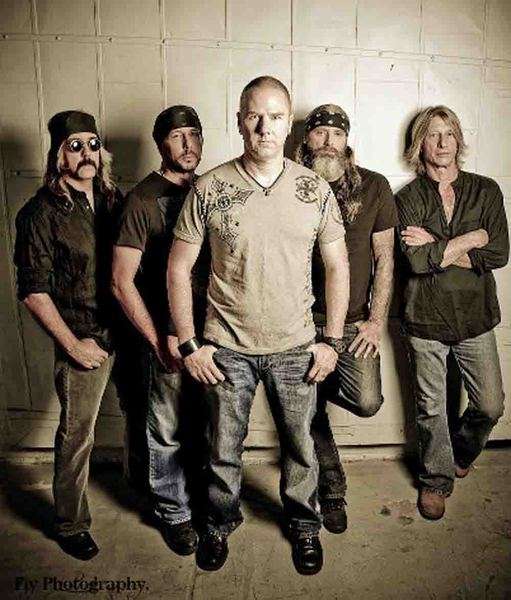 One of the most influential Doom acts from the 80s playing an unique mix of old school doom-metal and psychedelic rock with clean vocals combining the lumbering heaviness of Black Sabbath and the dual guitars of Judas Priest. The group was formed in 1979 in the outskirts of Chicago, IL by vocalist Eric Wagner, guitarists Bruce Franklin and Rick Wartell, bassist Ian Brown, and drummer Jeff "Oly" Olson. Throughout their history, Franklin and Wartell have remained the only constants in the band. The band's first two albums are characterized by their lumbering tempos, heavy guitars, and Christian lyrics (which, Wagner would later state were written more as a reaction to the rising tide of satanic metal bands in the early '80s as opposed to an attempt at preaching) and are considered classics in many doom metal quarters. By the 1990s, the band traded in the doom and Christianity for a more psychedelic/stoner metal sound. By the end of the '90s, Wagner had left the group and the band sat on the backburner as members focused on other projects. In the early/mid 2000s, Franklin, Wagner, Wartell, and Olson re-grouped and eventually released 2007's "Simple Mind Condition". Afterwards, the band fractured again, with Wagner and Olson eventually leaving and Wartell and Franklin continuing with different line ups. In 2013, Trouble released "The Distortion Field" with vocalist Kyle Thomas, who had previously replaced Wagner from 1997 to 2000. In 2012, Wagner, Olson, and former bassist Ron Holzner (who played bass in Trouble from 1986 until 2002) formed The Skull, who were initially set to pay tribute to Trouble's older, doom material but eventually opted to write original music.

Psalm 9 is the debut studio album by American doom metal band Trouble, released in 1984. The album was originally released eponymously and was renamed to Psalm 9 after the release of the band's fourth album, which was their 1990 self-titled release. Along with the Saint Vitus' eponymous debut album from the same year, Psalm 9 is considered by many critics to be one of the first doom metal releases.The cover of Cream's "Tales of Brave Ulysses" was a B-side to the only single taken from the album.The album has been released for CD on three occasions: in 1991 by Metal Blade Records, a year after the release of then-current album Trouble; remastered using the original master tapes and reissued again by Metal Blade in 1994, commemorating the 10th anniversary of its release; and again remastered and reissued by Escapi Music in October 2006, with a bonus DVD.Sometime in the year of 1979, five men in the Chicago, Illinois area decided to form a band, drawing influences from Black Sabbath, classic rock and, later on, psychedelic music. These men were Eric Wagner (vocals), Bruce Franklin and Rick Wartell (guitars), Sean McAllister (bass), and Jeff Olson (drums). With these creative people at work, they reinvented the sound created by their heroes of Black Sabbath for a new decade, and thus these legendary forerunners of Doom, Trouble, released this (at first eponymous, later changed to Psalm 9) debut in 1984, with a large cult following thereafter. And it’s not hard to see why. With tempo changes executed flawlessly within songs, a dark, sludgy tone, magnificent songwriting, and other superior aspects, Psalm 9 remains a pinnacle release and continues to influence today.And a lot of that comes from the guitar front. Riff driven, the album is, and many great ones are heard here. From harmonization of huge, chunky riffs, to trampling semi thrash palm-muted riffage, Psalm 9 covers ground on an ample level. What makes the riffs that much more murky, heavy, and strong is the tone; very low ended and thick yet with an abrasive touch for aggressive listening, along with downed-tuning, some bear the reminisce of Candlemass. Still, snarling low register chords sound well produced and distinctive among all the instruments, while retaining the immensely evil sound that is the ‘theme’ for the album.Solos are also prominent, and should be; they’re actually structured and melodic, apart from the blistering fast shred of Thrash Metal acts of the time. Tapping is well liked by the guitars, as featured in a lot of songs. However it is not tiring, nor does it sound overdone or old. Sweeps are sometimes found too, along with aspects of soloing that fit the album accordingly, such as long vibratos, legato notes, slow tempos, etc. And aside from the crunch and the solo, we have the low end of the strings, the bass, which is a very important aspect for the atmosphere prospect of the album. While not quite doing anything technically impressive (it follows the guitar almost exclusively), it is a very important part of the album to give it even more sludgy sound. Plus, it wouldn’t sound right if a funky bass line was smack dab in the middle of any song in this record, so technicality is not an issue at all here. Sean gets the job done, and that’s all we need.Jeff Olson has some impressive efforts here. His drumming is flawlessly tight with the other instruments of the album, working together very well. My favorite from him off this is the fifth track, Bastards Will Pay, with a standalone double kick part and perfect accents where they need to be, complimenting the guitars. Mr. Olson has some quirky fills and patterns, but its really structured and thought out, like the solos. Nothing is wrong with his sound either. His cymbals, hi hat, etc. sound crisp, a somewhat appreciated break from all the opaque sound of the rest of the album. The rest of his kit, however, sounds exactly as they should; in line with the rest of the album. Dense.And now for, probably the most distinctive part of the album, the vocals. Mr. Wagner is a unique, yet on the fence, vocalist. I personally neither love him nor hate him, I think he is just good, and that flies with me. Eric is somewhat the sonic counterpart of the album. He has a high voice, at least singing voice, that he uses kind of sloppily. Sometimes he can be heard on the verge of operatic (though nowhere near the likes of Doomsword or Candlemass), but mostly he likes his shout. Not a scream, not a yelp, or a growl; a shout. I really can’t explain it better than that, except that his voice has a lot of reverb, which is a plus to the album because it adds to the gloomy aspect of Trouble’s first album.So here we have it, Psalm 9. A grand showcase pointing out all that this band is known for; groovy, heavy riffing, deep sound, slow tempos, pulsing drums… Trouble’s debut will hopefully be remembered not only for being a great album, but for impacting Doom as we know it. For reinventing the blueprints made by Black Sabbath. And for bringing together Cathedral.