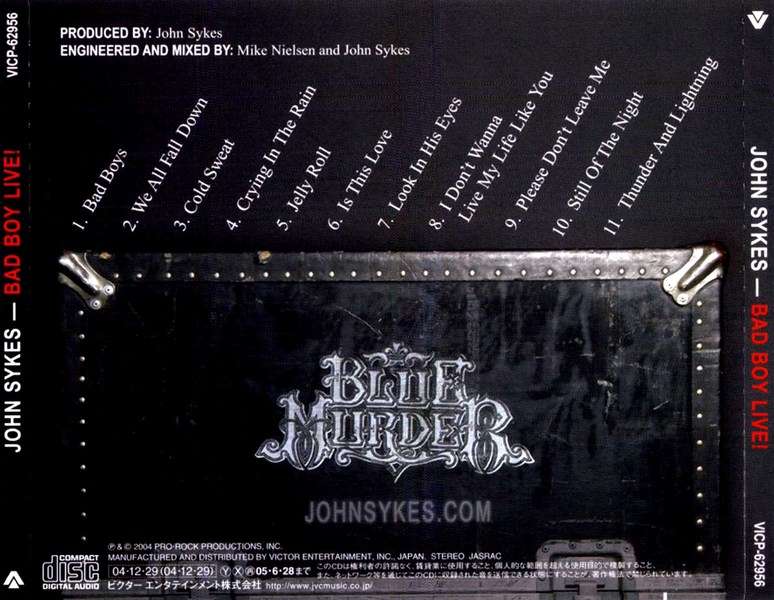 John James Sykes (born 29 July 1959) is an English rock guitarist, vocalist, and songwriter who has played with Streetfighter, Tygers of Pan Tang, John Sloman's Badlands, Thin Lizzy, Whitesnake, and Blue Murder. Sykes co-wrote the majority of the songs on Whitesnake's 1987 self-titled album with David Coverdale.Sykes is also a successful solo artist.Sykes joined Tygers of Pan Tang in 1980, and played guitar on the albums Spellbound (1981) and Crazy Nights (1982), as well as participating on two tracks for their 1983 release, The Cage.In 1982, John Sykes was recruited by former Uriah Heep frontman John Sloman, for his new band Badlands, alongside his future Whitesnake bandmate Neil Murray. This was to be short-lived however, as Badlands broke up shortly after formation. No music has ever been officially released, although bootlegs of rehearsals do exist. Sykes also auditioned, unsuccessfully, for Ozzy Osbourne's band following the death of Randy Rhoads.Sykes also auditioned for Ronnie James Dio's new band, Dio, to record on 1983's Holy Diver album but was unsuccessful, as Dio instead chose Sweet Savage guitarist, Vivian Campbell.At the age of 23, Sykes was asked by Phil Lynott to join Thin Lizzy, filling the spot left by previous guitarist Snowy White. He participated in the recording of the band's final studio album Thunder and Lightning, and contributed the track "Cold Sweat".Sykes toured with the band until the autumn of 1983 to promote Thunder and Lightning, from which the live album Life was recorded. Following the tour, Thin Lizzy disbanded.Sykes joined Phil Lynott for Lynott’s solo tour of Europe in a band dubbed The Three Musketeers featuring Lynott, Brian Downey, Scott Gorham, Darren Wharton, and Sykes.David Coverdale hired Sykes to join Whitesnake following the release of Slide It In in 1984. He re-recorded some guitar tracks for the US release, and toured in support of the album, culminating with the 1985 Rock in Rio festival.Sykes co-wrote the majority of the songs on Whitesnake's 1987 self-titled album with David Coverdale, and recorded the guitar as well as some backing vocal tracks. Near the end of the 1987 sessions Coverdale fired the entire band (allegedly because of personality clashes and matters of ego) and brought in Adrian Vandenberg to record the solo on "Here I Go Again".This was Whitesnake's most successful album, peaking at #2 on the Billboard 200 chart and selling over eight million copies in the United States alone. It contained the hit singles "Still of the Night", "Is This Love", "Give Me All Your Love", and "Here I Go Again" (the last was not a Sykes composition).After Coverdale fired the 1987-era band, Sykes went on to form Blue Murder with Vanilla Fudge drummer Carmine Appice and The Firm bassist Tony Franklin.After a demo was recorded with Ray Gillen on vocals, A&R executive John Kalodner encouraged Sykes to handle the vocal duties himself.Their self-titled debut album was a moderate success, but the 1993 follow-up Nothin' but Trouble did not fare as well. After two studio albums and a live recording, Blue Murder was put to bed and Sykes began recording and touring under his own name.In the years following Blue Murder, Sykes recorded several solo albums: Out of My Tree (1995), Loveland (1997), 20th Century (1997) and Nuclear Cowboy (2000). A song from 20th Century, "Cautionary Warning", was used in the anime series Black Heaven. The footage accompanying the song was rotoscoped from one of Sykes' concerts. Sykes' involvement in the series was the a feature of Pioneer USA's marketing.In 2004, the live album Bad Boy Live! was released, covering a number of "greatest hits" from Thin Lizzy, Whitesnake, Blue Murder, and his solo work.Sykes has made rare guest appearances on the Hughes Turner Project debut album on the track "Heaven's Missing an Angel", and later on keyboardist Derek Sherinian's 2004 solo album "Mythology", playing alongside Zakk Wylde on the track "God of War".

Bad Boy Live! is a live album by John Sykes, released in 2004. The album was recorded during a Japanese tour in April 2004.[1] The record features material from Sykes' solo career, as well as his time with Thin Lizzy, Whitesnake and Blue Murder.This CD is in memory of Uncle John Sykes and dedicated to a wonderful man and the "Original Deal Maker"- the one and only: Mr. STU RIC. Rest in Peace.