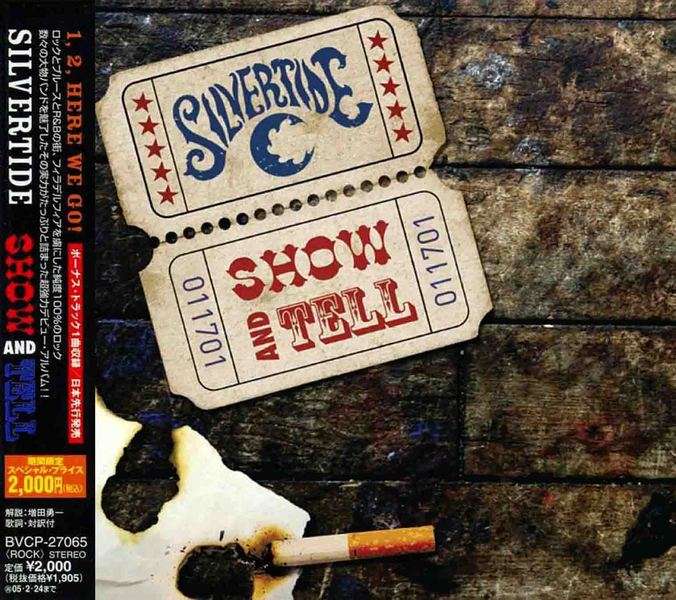 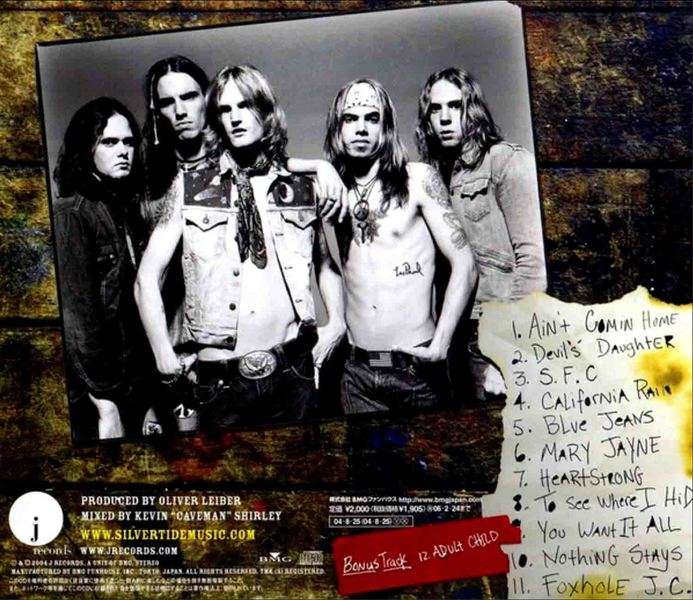 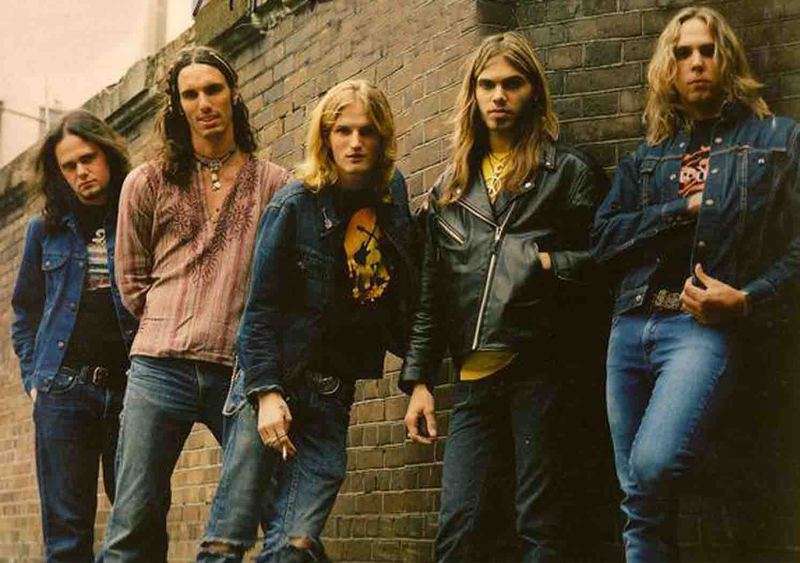 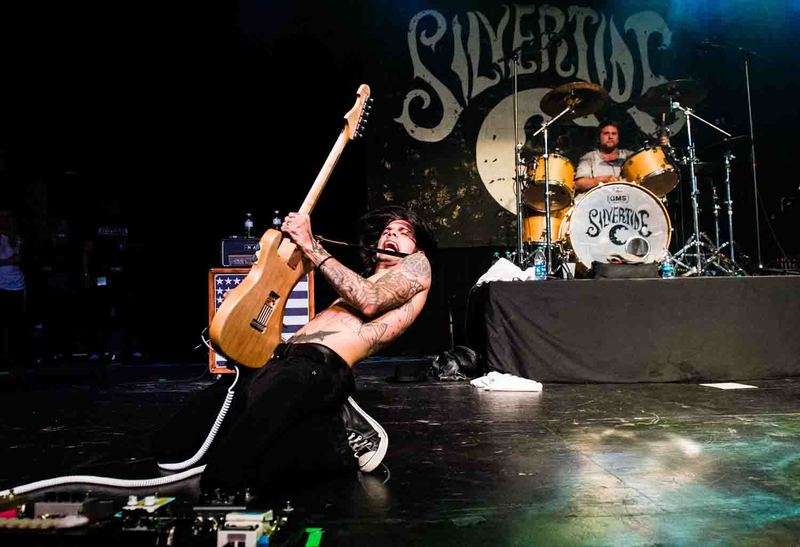 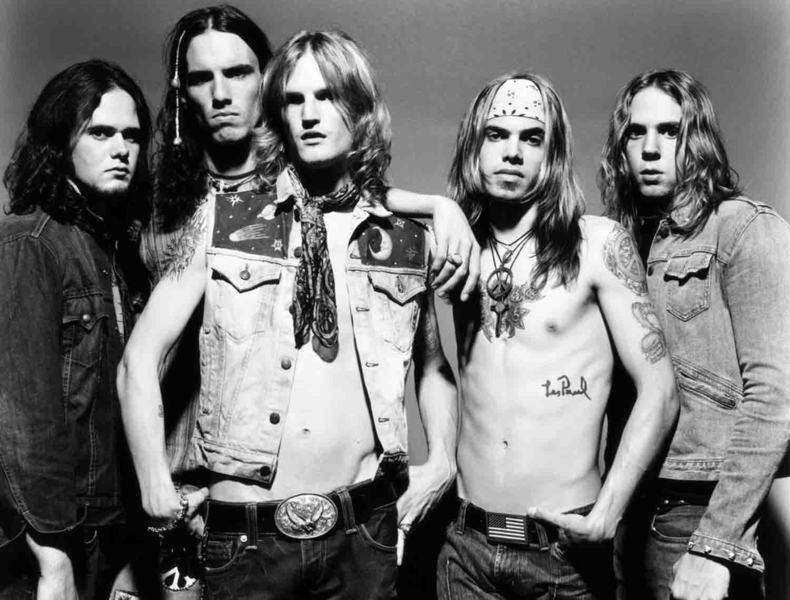 Silvertide is an American rock band from Philadelphia, Pennsylvania.Originally named Vertigo, Silvertide was formed in January 2001 in Northeast Philadelphia. At first, the band was signed by J Records, and they released their first EP American Excess in 2002. Their first full album, Show and Tell, was released in 2004 and produced by David Ivory.After completion of their debut album in 2003, Silvertide hit the road and toured straight until 2006, most notably in support of Van Halen, Velvet Revolver, and Mötley Crüe in the summer of 2004, and Alter Bridge in 2005. On March 4, 2005, the band performed their single "Blue Jeans" on an episode of Jimmy Kimmel Live.In 2006, M. Night Shyamalan featured Silvertide in his film Lady in the Water. Silvertide was featured on the soundtrack with their covers of Bob Dylan's "Maggie's Farm" and "It Ain't Me, Babe".In February 2006 the band made their second appearance on the cover of Origivation Magazine. The photoshoot took place while the band was in preproduction for their next album.Silvertide continued to play shows after the temporary departure of lead guitarist and founding member Nick Perri decided to hit the road with Perry Farrell, Shinedown, and Matt Sorum. Guitarist "Evil Rob", also from the Philadelphia-based band Pepper's Ghost and long time friend of the band, was called to fill in for Perri on numerous occasions.Silvertide's future soon came into doubt as news of their new album had slowed down, and the band had updated their Myspace page to show their record label as "We think J Records?" Eventually, a few members of Silvertide began to pursue other projects including Walt Lafty and Brian Weaver's band Automatic Fire, Walt and Nick Perri's band SINAI, and various solo releases. In 2011, J Records was dissolved into RCA Records, at which time Silvertide was no longer listed on the label's roster.In October, 2012, Silvertide created a new Facebook page and began posting old band photos, as well as hints of a potential reunion. On November 2, the band posted an announcement that Silvertide "will be making music in 2013."On January 9, 2013 Silvertide announced on WMMR that they are going to play a reunion show on March 9, 2013 at The TLA and enter the studio sometime after that show. Walt also said during the reunion show that it was being recorded by "Puffy" Dee Miller for Silversound Productions. Cinematographers consisted of Chris Lonergan, George Morgan, Burke Pushman and Bryan Skill. What is being done with the video is unknown at this point. The show on March 9 was the first of a handful of shows the band performed in 2013.

Show and Tell (also known as Show & Tell) is the American band Silvertide's full-length debut album.Produced by Oliver Leiber and mixed by Kevin "Caveman" Shirley, the band released it on September 28, 2004. Show and Tell features a melodic hard rock style deliberately reminiscent of the aggressive work done by groups achieving prominence in the 1970s and 1980s, examples being AC/DC, Aerosmith, and Led Zeppelin.It was distributed by the label J Records.A commercial success, the album spawned multiple top 20 singles and it's noted for including the band's 'signature song': the strident arena rock track "Ain't Comin' Home". The group created a music video featuring a straight performance of the song, emphasizing frontman Walt Lafty's aggressive style.Members of the band experienced a surprisingly rapid rise to prominence, being signed a major record label when the musicians were still in their teens. They honed their particular sound by touring various nightclubs and other establishments in working-class areas of their native Philadelphia, Pennsylvania.In terms of guitar work, Silvertide member Nick Perri took influence from the strident playing of Angus Young from the group AC/DC. That band also provided direct inspiration for other parts of the sound of Show and Tell. Some tracks call back to the glam metal movement, with the song "California Rain" explicitly mentioning in its lyrics the Sunset Strip area of Los Angeles.Record producer Oliver Leiber shares multiple songwriting credits on the release.He had previously produced work by pop and rock n roll artists such as BBMak, Boomkat, The Corrs, The Knack, The Troys, and Youngstown in the 2000s.He started out as a member of the funk and soul group Ta Mara & the Seen in the 1980s.The album was a commercial success, with three singles becoming top 20 rock hits on the charts done by Billboard magazine.Lead single "Ain't Comin' Home", which is also the first track on the album, has become known as Silvertide's 'signature song'. The group additionally created a music video featuring a straight performance of the track.Mixed to positive reviews have come in from various publications such as Allmusic and PopMatters.Writing for the latter, music critic Michael Franco particularly praised the work of frontman Walt Lafty, remarking that the singer's "voice is full of nasty blue-eyed soul, strutting and tearing and shuffling at will." He also stated that Lafty's "phrasing also displays a cocksure aplomb mastered by only a few legends" as the vocalist "knows that delivering a lyric is as important as the actual words." Richie Unterberger, writing for Allmusic, argued that the release "doesn't boast hooks on the order" of the band's influences, labeling the album as "unexceptional". However, he stated as well that the group provided some positive variety, with several songs being on the slower side, and stated that Silvertide had the "aggressive" vibe of previous bands "down cold". While giving a mixed review, Unterberger additionally compared the vocals to that of Robert Plant, the frontman of band Led Zeppelin.Some retrospective commentary stated that the band seemed to have peaked too early, particularly given the teenage status of multiple band members. After the group's later break-up and reconciliation years later, Lafty and other members stated that they mostly agreed. However, they still felt as if the album captured their aggressive sound.