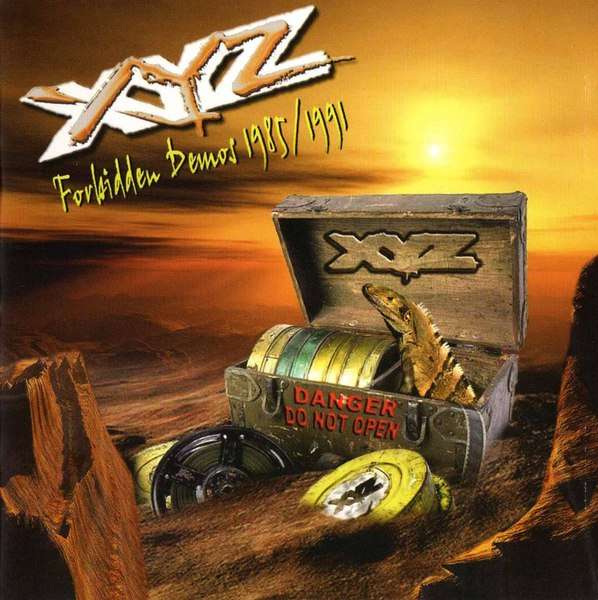 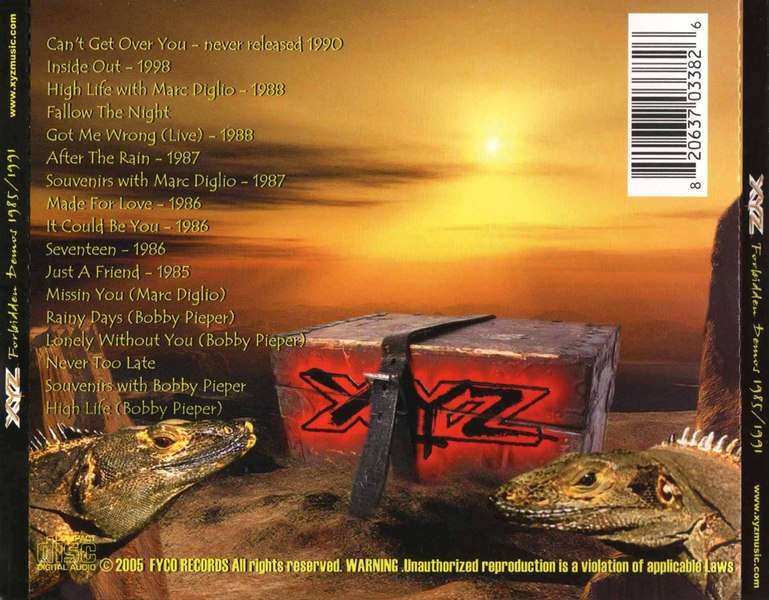 XYZ was originally created in Lyon (France) where Patt Fontaine and Terry Ilous were born and grew up. Then they moved to Los Angeles, and began a musical career in 1986. XYZ started off as the unofficial house band of "The Whisky A Go Go" nightclub in Los Angeles. The original members were Terry Ilous (vocals), Bobby Pieper (guitars), Patt Fontaine (bass) and Joey Pafumi (drums). A tour of the US with Enuff Z'Nuff and Alice Cooper followed the success of their 1989 Enigma released debut album, and they were signed by major label Capitol for their second.The band played clubs throughout the mid 1980s and first got a record deal in 1989 with Don Dokken as their producer. Terry Ilous's vocal style on the band's first album was very similar to Dokken's. Ilous and Fontaine then recruited Mark Diglio (guitars) and Paul Monroe (drums) to replace the departing Pieper and Pafumi, to record a debut album, produced by Don Dokken. The album was released in 1989 and contained the hits "Inside Out" and "What Keeps Me Loving You". Videos for both songs received reasonable airplay; however, the album itself was not an overall success, managing to reach only No. 99 on the Billboard charts. A third single from the album, "Maggy" was used in the 1990 Dolph Lundgren movie I Come in Peace. The next album, Hungry, released in 1991, had even less commercial success—not charting at all. Diglio and Monroe left the band and were replaced by Tony Burnett and Joey Shapiro, respectively. After the next tour was finished, band members went separate ways once again. They reunited in 2002 with the lineup of Ilous, Fontaine, Tony Marcus, and Shapiro, and still perform to the present day.XYZ is gaining success again in USA and Europe doing several festivals and shows. In addition to being lead vocals for XYZ, Terry Ilous is also currently doing vocals for Great White, replacing Jack Russell.Terry was recently interviewed by Argentinean rock journalist Lucas H. Gordon, where the singer talked about a recent charity event called '80's Rockers for Japan' organized by Ilous to raise money for the Red Cross from Japan, to help victims of the 2011 earthquake and tsunami.In the event many hard rock celebrities appeared like ex-Toto Bobby Kimball, Paul Shortino, Rudy Sarzo, Michael T. Ross, John Payne, Carmine Appice, Vinny Appice, Lorraine Lewis and others.XYZ performed at Rocklahoma Festival in 2008, the M3 Rock Festival, Merriweather Post Pavilion, Columbia, MD, and Firefest, Rock City, Nottingham, UK in 2012.Drummer Joey Shapiro recently purchased drumstick and guitar pick grip company Gorilla Snot.While Terry Ilous is still the frontman for XYZ, he is also current lead singer for 80's band Great White as of 2010.Paul Monroe was a contestant with his Daughter on the 10/19/2016 episode of "That Awkward Game Show" on Spike TV.

This is the second set of demos to surface from XYZ this year, and the better of the two. Forbidden Demos 1985/1991 contains five of the songs from the original line-up (all 12 songs from these recordings can be found on Rainy Days) and unreleased or slightly different recordings.Many of the popular tunes from the self-titled debut are here like “Inside Out”, “Follow The Night”, “After The Rain” and “Souvenirs”, and most of them stay pretty true to the songs we all know. “Inside Out” however has a noticeably different chorus on this demo (it’s a good thing they changed for the debut) and the Bobby Pieper version of “Souvenirs” is rougher around the edges then the slick power ballad that came later.The best part of this album is some of the previously unreleased tracks, tracks so good that it boggles the mind why they wouldn’t have been recorded for either XYZ or Hungry. “High Life”, which ended up being a Japanese Hungry bonus track, is an aggressive rocker with a powerful chorus and the live “You Got Me Wrong” is one of XYZ‘s heavier numbers with its galloping guitar riff. “Made For Love” is a catchy number but is overrun with corny 80’s keyboards, I’d like to see this tune updated.Actually several of the demos from the original band have an abundance of keyboards/piano which makes for some emotional sounding music, like that on “Rainy Days” and “Never Too Late”. Overall this is a great collection that takes you through XYZ‘s formative years, and who knew they had so many cool songs in the vaults.

Produced by XYZ and George Tutko.