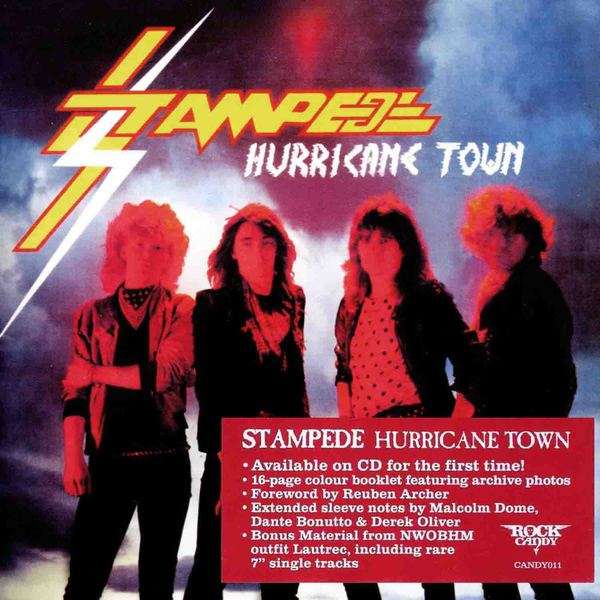 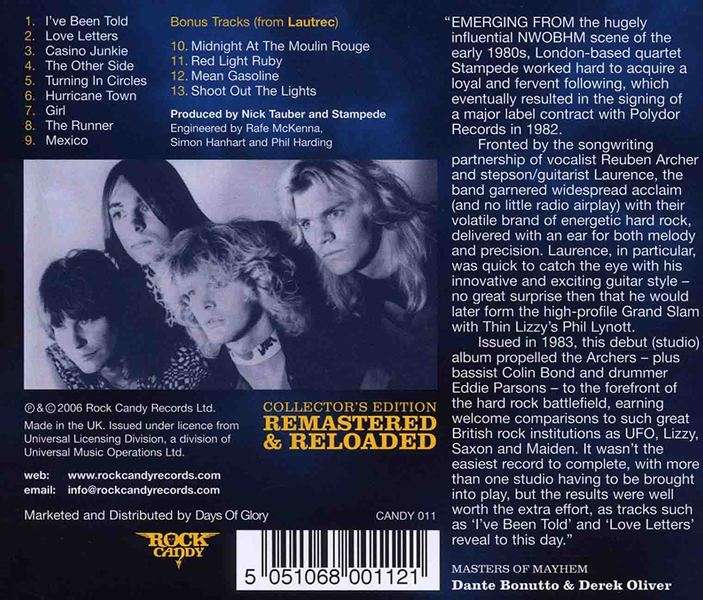 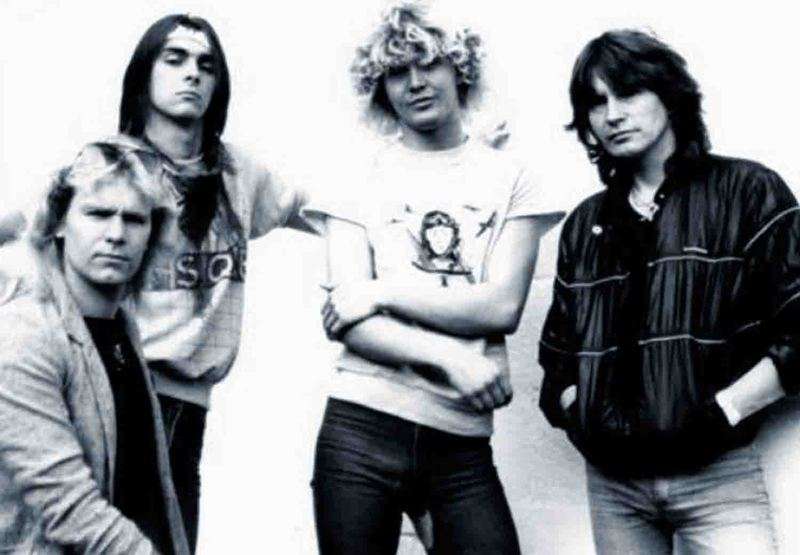 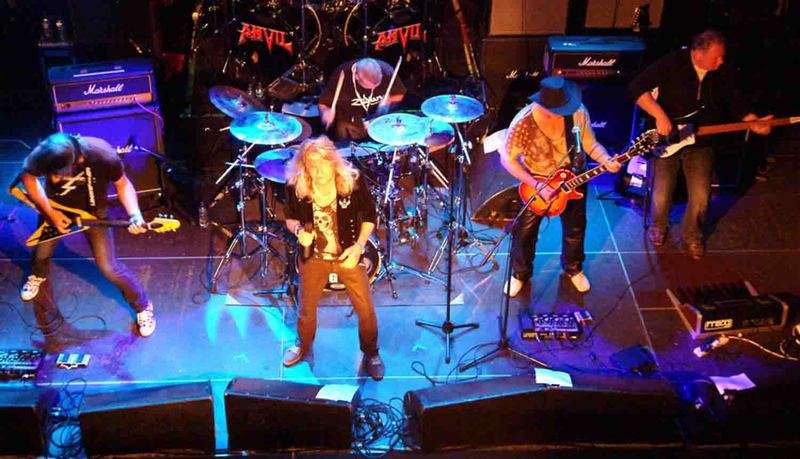 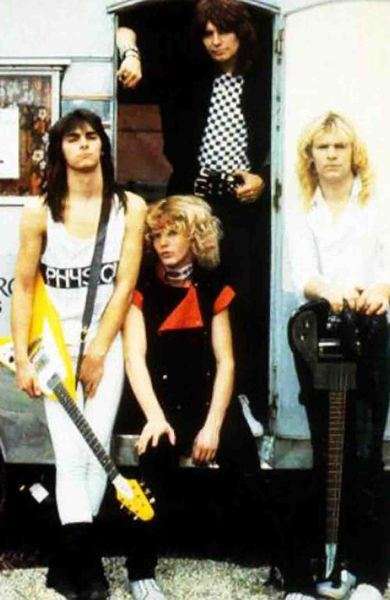 Stampede was formed in 1981: a cult hard rock outfit which exploded onto the British rock scene, signing to Polydor Records and immediately receiving favourable press attention.Song writing duo Reuben and Laurence Archer had already made inroads into the music scene prior to STAMPEDE around 1979, with previous music projects Lautrec, Lionheart and Wild Horses, completing touring with the likes of Saxon, Whitesnake and Def Leppard and appearing at prestigious venues such as London’s Marquee.After keyboardist Alan Nelson moved on, Stampede played the 1982 Reading Festival with what then became the definitive four-piece line-up: Reuben Archer (vocals), Laurence Archer (guitar), Colin Bond (bass) and Eddie Parsons (drums). The Reading and Mildenhall Festival sets from that year were recorded on The Rolling Stones mobile studio, the result of which was the first Stampede album released by Polydor; the Official Live Bootleg.The band completed a residency at the Marquee at this time, as well as two tours with Gary Moore,. Although live the band preferred the tighter feel without keyboards, Magnum’s Mark Stanway was brought in on keys later on for the recording of their first studio album Hurricane Town (1983).Polydor also released a 4 track EP; Days of Wine And Roses, a single of the same name, and a further 2 singles; The Other Side, and Photographs., which received considerable airplay on BBC Radio, Capital Radio and across Europe and Japan. Stampede also appeared on many compilation albums between 1981 and 1983.The band continued to tour, completing a residency in Portugal. Other notable appearances included live sessions for the BBC Tommy Vance Friday Rock Show, Fluff Freeman’s Capital Radio Rock Show, BBC In Concert, and several TV slots.Prior to The band’s Reading appearance, Reuben broke his leg badly and soon quit the music business to form his design company, whilst Laurence went on to join Phil Lynott in his new band Grand Slam, and later UFO to record High Stakes and Dangerous Men and UFO: Live in Japan. Bassist Colin Bond went on to work with Meat Loaf and Bernie Torme, and also formed his widely acclaimed tribute band, Beach Boys Inc.Stampede’s reunion in 2009 was a unanimous decision by the three founder members; Reuben Archer, Laurence Archer and Colin Bond.The original 2009 reunion gigs and first stages of recording featured Clive Edwards on drums. As with Laurence, though, the difficult recording schedule and travelling distances involved made it logistically impossible to organise. Luckily for the band, though, Reuben found in Steve Graystone a drummer who could fall in with the awkward recording schedule and at the same time proved to be the powerhouse required.Together with new helping hands – including hot-shot guitarist Rob Wolverson and guitarist Chris Clowsley – the band crafted a worthy and impressive, long-awaited follow-up to ‘Hurricane Town’, called ‘A Sudden Impulse’ released on Rock Candy Records in May 2011. This record harnessed all the promise of the original band, but with the experience of years crafting their art in numerous studios and on the live circuit.The band had a fantastic comeback year in 2011 promoting the new record and completing a UK tour with Y&T, dates with Anvil and Praying Mantis as well as an appearance at Hard Rock Hell V.

Rock Candy remastered reissue of cult classic STAMPEDE album “Hurricane Town” (1983), including 4 bonus tracks. Back in the NWOBHM era, there were a few bands valiantly trying to be a little radio-friendly. One was called Def Leppard, but there was also Shy, Chrome Molly, and at the heavier end, Wildfire and Glaswegians Heavy Pettin’.Stampede nestled in amongst them, but had an appealing ‘70s guitarishness to their pompy hard rock, courtesy of the band’s standout talent axe seducer Laurence Archer, who would play craps for UFO and Phil Lynott’s Grand Slam.”Hurricane Town” is the band’s second album, sporting a crisp melodic production all over catchy rockers sung by Laurence’s stepdad Reuben Archer.Emerging from the new wave of the British heavy metal scene of the early ’80s, London based quartet Stampede acquired a loyal and fervent following and in 1982, a major label contract with Polydor.Fronted by vocalist Rueben Archer and son-in-law guitarist Lawrence Archer, the band garnered acclaim for a volatile mixture of energetic heavy rock and an ear for both melody and precision. Lawrence in particular, earned great acclaim for his innovative and exciting guitar playing (he would later form Grand Slam with Phil Lynott).Issued in 1983, ”Hurricane Town” propelled the band to the forefront of the hard rock battlefield earning welcome comparisons to other great British institutions such as UFO, Thin Lizzy, Saxon and Iron Maiden.This remastered edition features very cool bonuses, from steely, electric pre-Stampede band LAUTREC, songs only released on a rare vinyl EP.