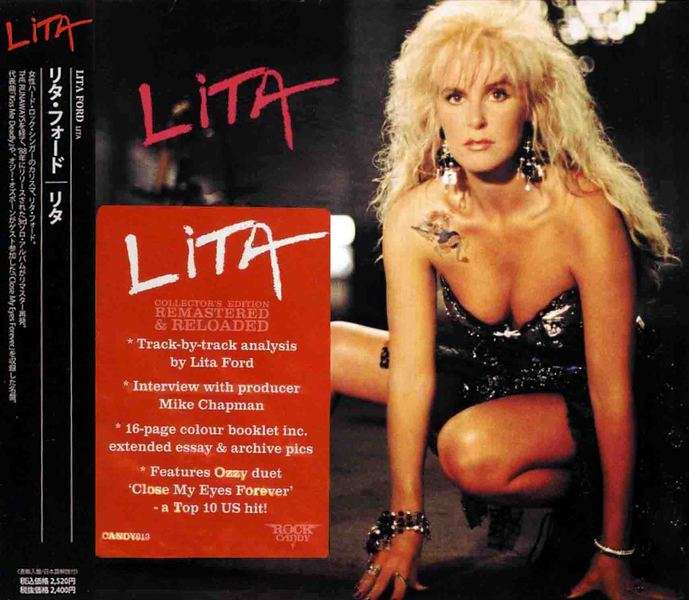 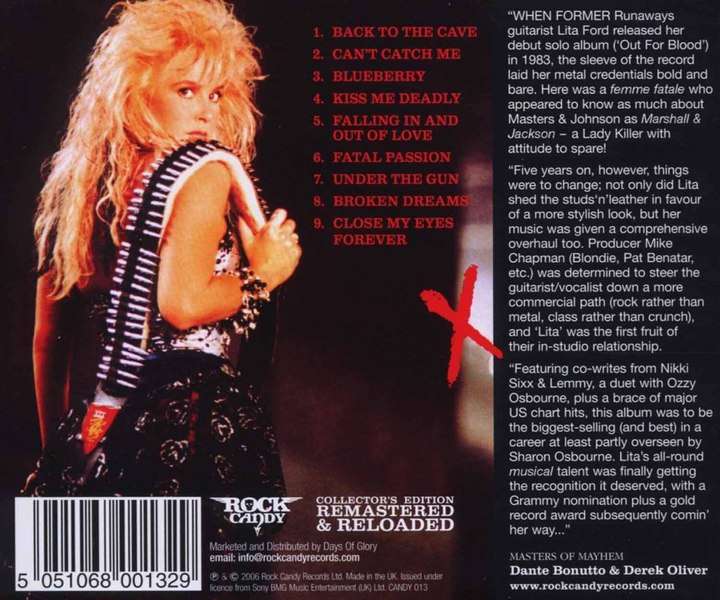 For me, LITA FORD best album (and her most successful) always will be "Lita", greatly remastered by Rock Candy Records. Note there was two releases by Rock Candy, the first with the original tracklist, and this second featuring as bonus track the much sought after remix / video version of the smash hit "Close My Eyes Forever".When former Runaways guitarist Lita Ford released her debut solo album ('Out For Blood') in 1983, the sleeve of the record laid her metal credentials bold and bare. Five years on, however, things were to change; not only did Lita shed the studs 'n leather in favour of a more stylish look, but her music was given a comprehensive overhaul too.Producer Mike Chapman was determined to steer her down a more commercial path (melodic hard rock rather than metal, class rather than crunch), and 'Lita' was the first fruit of their in-studio relationship.Featuring co-writes from Motley Crue's Nikki Sixx & Motorhead's Lemmy, a duet with Ozzy Osbourne, plus a brace of major US chart hits, this album was to be the biggest-selling (and best) in her career.Lita's all-round musical talent was finally getting the recognition it desereved, with a Grammy nomination plus a gold record award subsequently comin' her way.Opener "Back To The Cave" demonstrates Lita's fiery guitar-playing abilities and a sound that outdoes Slippery When Wet-era Bon Jovi, but then, she ups the mileage on the next song "Can't Catch Me" with its express train guitar and lovely keyboards is one of the best songs here. Small wonder, as Motorhead's Lemmy wrote this.The Chapman-penned "Blueberry" is a guitar rocker with Ron Nevison-like keyboard AOR fills, but nothing that dilutes the metal in this song.Then comes the single that got Lita into the Top 40 for the first time. With strong guitar riffs, synths galore, and pop metal sensibilities without diluting its power, "Kiss Me Deadly" is a killer tune."Falling In And Out Of Love" was co-written by Nikki Sixx of the Crue and rocks with style, "Fatal Passion" is one of the harder cuts and truly effective, while "Broken Dreams" has a cool melodic hard bounce.The final song, "Close My Eyes Forever," a sobering and melancholy song of betrayal and regret that drove one to death was both sung and written by Lita and Ozzy, with terminal overtones: "And when we sleep, would you shelter me/in your warm and darkened grave." A tragic operatic aura of a final sleep is created by the synths in the last chorus repeat.In the early 80's, it was impossible for Lita Ford to get into the mainstream. In 1988, with groups like Bon Jovi, Europe, Poison and Motley Crue having paved the way for hard rock / hair metal for mass acceptance, Lita did it, and with results that outdid many male metal bands.