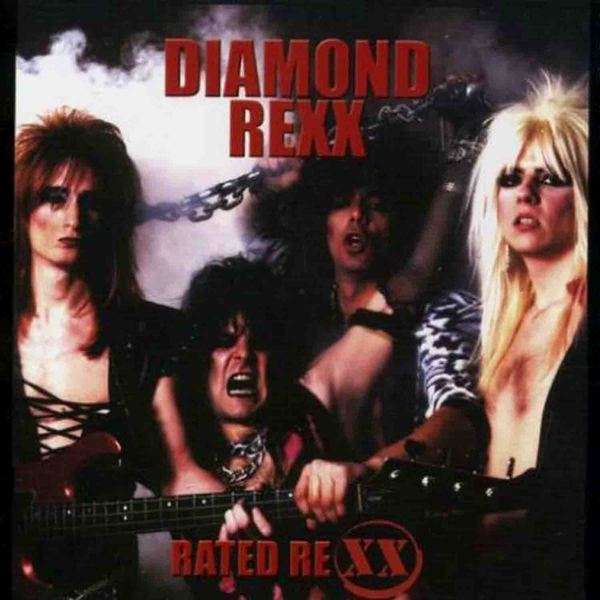 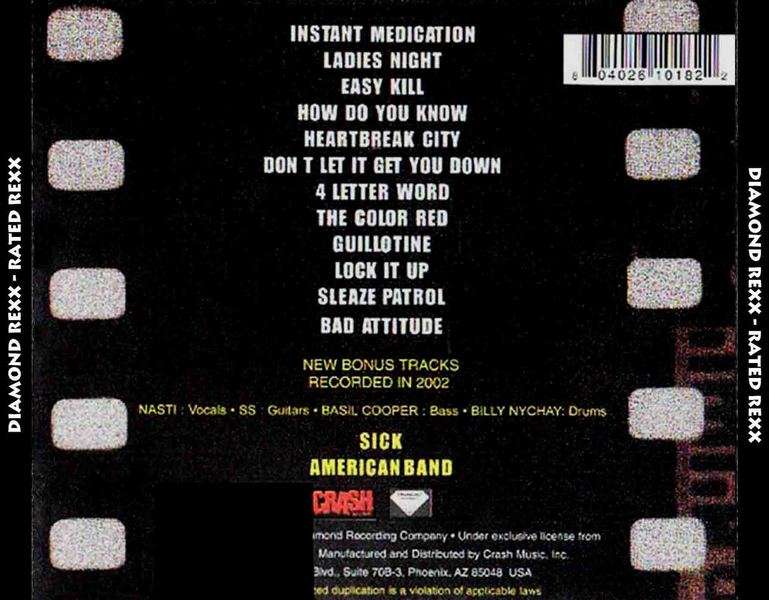 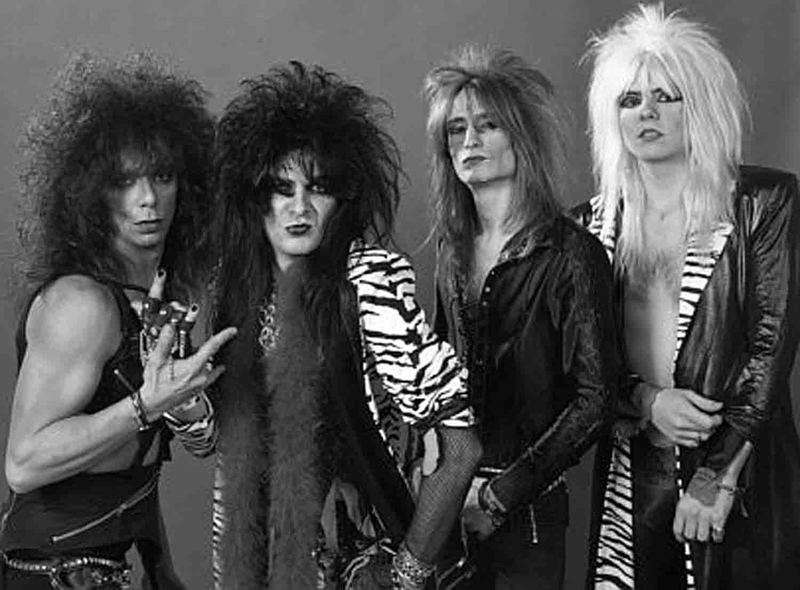 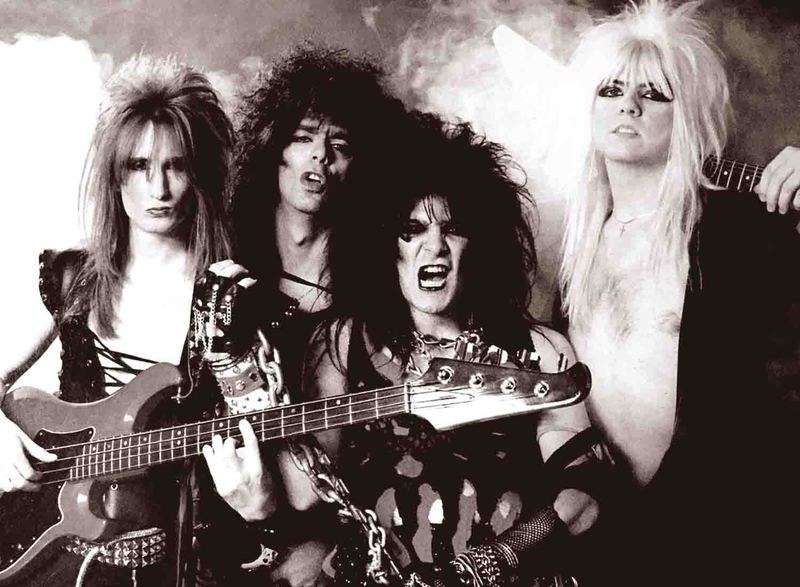 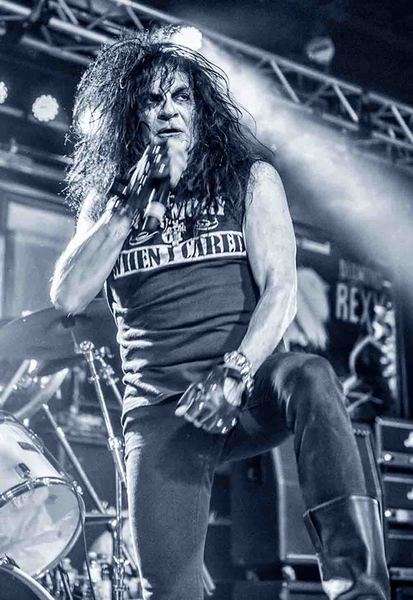 Diamond Rexx is an American glam metal band from Chicago, Illinois, formed in 1985 by singer Nasti Habits and guitarist Scott St. Lust (aka S. Scot Priest, also of D'Molls).Singer Nasti Habits created the original four-member lineup with guitarist S.S. Priest in 1985. Four months after their first live show the band signed a management deal with Mark Nawara who then got the band signed to Island records, and with the addition of bassist Andre and drummer Johnny Cottone they released their debut album Land of the Damned in 1986.In 1989, the band signed to the independent Red Light Records, where they released their second album Rated Rexx in 1990.and third release Golden Gates in 1991. The album boasted S.S. Priest on guitar but actually all guitars were performed by John Luckhaupt (aka: Johnny L. Angel) who had left the band just before the album's release. The band went on hiatus in the 1990s, but Habits formed a new line-up in 2001, now with S.S. Priest on guitar, Basil Cooper (Ex-Daisy Chain/Mind Bomb) on bass and background vocals and Billy Nychay on drums, now influenced by alternative metal.This line-up recorded the Rexx Erected album, released on the Diamond label, after which Cooper left to be replaced by Tommy Hanus.The Evil was released in 2002 on Crash Music.[1] In 2006 bassist Tommy Evans joined the band, and the following year, original drummer Johnny Cottone returned on drums. The band then went dormant and remained quiet over the next few years. In 2009 the original line-up of Habits/Andre/Priest/Cottone reunited for a twenty-year anniversary show.

Rated Rexx is the third studio album by American heavy metal/glam metal band Diamond Rexx. It was released by Red Light Records in 1990, and reissued by Crash Music Inc. in 2002.Now we have here a hard to find CD, the remastered reissue of DIAMOND REXX 1990 album “Rated ReXX“, including two bonus tracks.This is a highly underrated hard rock record from the late 80s scene, plenty of razor crunchy guitars and smashing drums yet wrapped by a clean polished production.Some kind of a mix between WASP, 80s ALICE COOPER, VINNIE VINCENT and LIZZY BORDEN, on “Rated Rexx” DIAMOND REXX rocks hard via 3-minute kick ass adrenaline tunes.Be aware there’s some fake versions of this release floating around, this is the real remastered CD.DIAMOND REXX was formed in the first half of the Eighties during the glammy hard rock explosion and the band recorded their first album in 1986, quite influenced by MOTLEY CRUE. Pretty dirty in sound (and mix/production) isn’t exactly my cup of tea.But with “Rated Rexx” thins are different; this album kills.After some line up changes – but founder / frontman Nasti Habits still commanding the band – “Rated Rexx” was originally released on Red Light Records in early 1990 and wasn’t issued again on CD until this 2002 remaster by Crash Music.Led by the sinister sneer of Nasti Habits, DIAMOND REXX’s second full-length album is much more focused in songwriting, playing and production. Habit’s gnarly vocals are still very Alice Cooper-ish and quite unique.As said, the songwriting has improved since the debut as well, with more immediate hooks. A song like “Instant Medication” is instantly like-able head banging fodder.“Ladies Night” would likely light up any night club.“4 Letter Word” and “Sleaze Patrol” sound like they could have been written for one of the early L.A. Guns albums. Both songs have assassin groove, simple sing-along hooks and sleazy lyrics.The remastered reissue which sports new cover art (I prefer the original) also includes two bonus tracks of newly recorded material. The two new songs have a far more modern production and a darker style.However, despite the more updated production, “Sick” isn’t all that dissimilar from the songs recorded for “Rated ReXX”. “American Band” is cover of Grand Funk’s classic anthem “We’re an American Band”. The 2002 also sports new cover art.Killer album, hooky, sinister at places, fun, very well and cleverly arranged (there’s some really good intros and interesting mid-section on few tracks) “Rated ReXX” remains unheard by many.Don’t be fooled by the ‘sleazy’ cover, if you don’t know DIAMOND REXX you’ll be greatly surprised by this album.