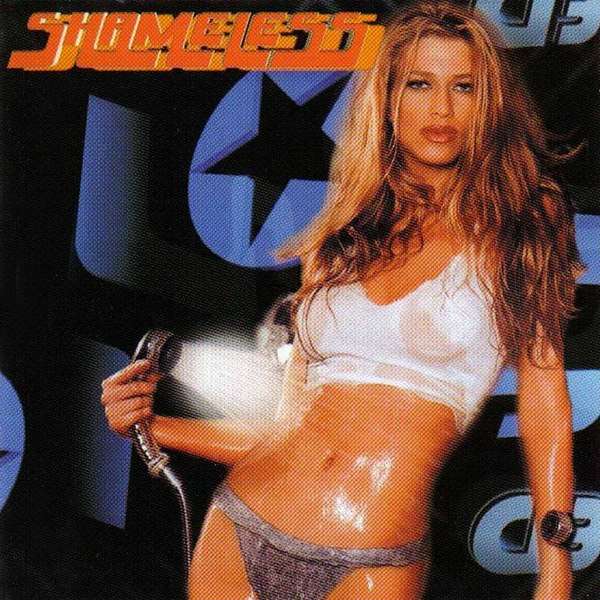 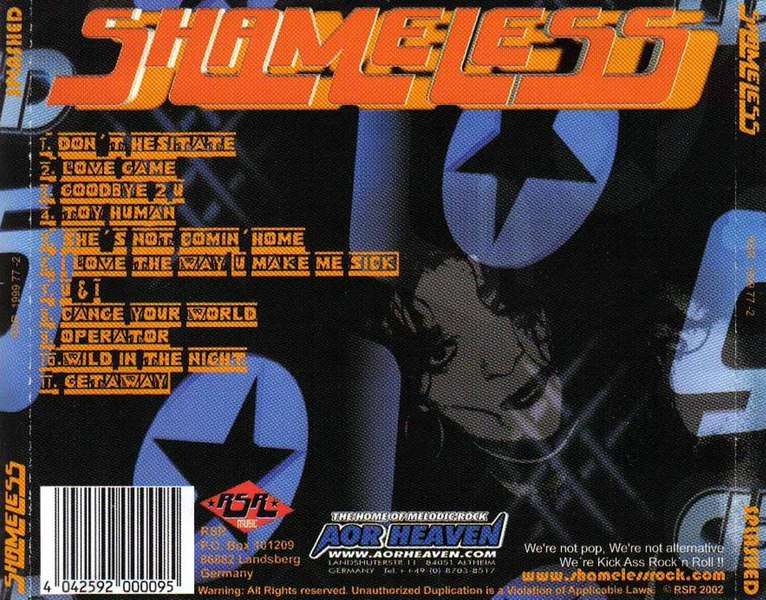 Shameless are a hard rock glam band that was formed in the spring of 1989 by bassist Alexx “Skunk” Michael in Munich, Germany.Shameless are a hard rock and glam metal supergroup based in Munich, Germany. Although the band are based in Germany, they are notable for having numerous American rockers appearing on their albums.The original incarnation of Shameless was formed in April 1989 by bassist Alexx "Skunk" Michael. The band were relatively popular in their home town, selling out a 500 capacity club on their very first show. The vocalist left the band at the end of 1991 and they folded.Michael decided to reform Shameless in 1998 with his friend % guitarplayer BC. Alexx enlisted help from his friend, Eric Singer (drummer for KISS, Alice Cooper, Black Sabbath).Through Singer, the band hired an all-star lineup that included Bruce Kulick (KISS), Tracii Guns (L.A. Guns), Robert Sweet (Stryper), Steve “Sex” Summers (Pretty Boy Floyd), Stevie Rachelle (Tuff), Brian Tichy (Billy Idol, Whitesnake) and others to record their debut release, “Backstreet Anthems.”Produced by former Guns N’ Roses guitarist, Gilby Clarke, “Backstreet Anthems” was recorded at Studio City in Los Angeles, California. The release contained 10 tracks, including covers of “A Hard Dayz Night (The Beatles) and “Flaming Youth” (KISS).Following its release, Shameless continued to build a cult following in the hard rock underground. In January of 2000, Alexx & BC returned to Keri Kelli’s (Alice Cooper, Slash’s Snakepit) studio in Orange County, California to record their sophomore release, “Queen 4 A Day.”Keeping the successful formula of their debut release, Michael and BC once again recruited some famous guest performers including Jani Lane (Warrant), Keith Alan (Big Band Babies), Steve Riley (L.A. Guns), Bruce Kulick (KISS), Eric Singer (KISS, Alice Cooper), Stevie Rachelle (Tuff), Steve Summers (Pretty Boy Floyd) and others. Shameless recorded 13 tracks but only 12 of them were used for the album. The last track (a cover of the KISS classic “Tomorrow” was used for a KISS Tribute CD and not included on the final version of the album.“Queen 4 A Day” was released in the summer of 2000 via MTM Music in Europe. The band toured Germany and the Netherlands in support of “Queen 4 A Day” including several performances where the band was joined onstage by Bruce Kulick (KISS).The group’s third release, “Splashed” was released in the summer of 2002. This time the band made a conscious decision to focus on a cohesive line-up that included Alexx Michael (bass), BC (guitar), Stevie Rachelle & Steve Summers (vocals) , and Mike Fasano (drums).“Splashed” carried on the Shameless spirit of real rock and roll while having good time.The release contained 11 original tracks with a bonus DVD of material from their 2000 tour, including a promotional video for the lead single, “Don’t Hesitate.”Following the release of “Splashed,” the band set out on a sold out tour of England, Germany, Holland, Austria & Italy . The band recorded several shows during the United Kingdom leg of the tour, and subsequently put out their first live release, “Super Hardcore Show.”It would be three years before Shameless returned to record their next studio release in december of 2006, “Famous 4 Madness”. Bassist, Alexx Michael and guitarist, BC were once again joined by vocalists, Steve Summers & Stevie Rachelle. “Famous 4 Madness” saw the band returning to fine form and enlisting help from outside musicians including Phil Lewis (L.A. Guns), Jani Lane (Warrant), John Corabi (The Scream, Motley Crue), Keri Kelli (Alice Cooper), Kari Kane (Pretty Boy Floyd), Eric Singer (KISS, Alice Cooper).In support of “Famous 4 Madness,” the band embarked on an European tour that took the band to Spain, Switzerland, Germany, Italy and the United Kingdom. Shameless continued to tour through 2009-2010 in Germany, Austria, Switzerland, Sweden, Belgium, France and Sweden.The band returned in December 2011, with a new studio release, “Dial S For Sex.” Featuring the two very successful songs, “Summertime Goodbye,” with vocalist Stevie Rachelle and guitarist Chris Holmes (W.A.S.P.) and a cover of the Katy Perry song“Hot N’ Cold” with Steve Summers on vocals.Shameless have recently completed recording their sixth studio release, “Beautiful Disaster.” The first single “Forever Ends Today” features Steve Summers (vocals), Tod T Burr(drums) along with BC & Michael Thomas(guitar) and Alexx Michael (bass). “Beautiful Disaster” contains 10 new original Shameless classics along with a cover of the T Rex / Marc Bolan classic “Life’s A Gas” featuring former The Runaways singer, Cherie Currie. This is the singer’s first appearance in the recording studio since 1998. Currie also lent her unique vocal talents on the Shameless original, “Dear Mum” that was written by Alexx Michael & Andy Brings. In addition, the band recorded the timeless Alice Cooper classic, “I’m Eighteen” with vocalist, Stevie Rachelle.Since their 1999 debut, Shameless have been establishing themselves as a band that doesn’t give a damn that the 80s are over – they continue to turn out good-natured, party rock and roll, regardless of shifting musical tends and styles.

Shameless is the glam / heavy-rock project of the German bass player Alexx Michael and the singer Steve Summers (Pretty Boy Floyd), to which he joins as guest Stevie Rachelle (singer of Tuff). That said, do not assume that this is a vulgar side-project. Indeed, "Splashed" is Shameless's 3rd studio album and follows on from "Backstreet anthems" (1999) and "Queen 4 a day" (2000).The first thing that challenges is the visual of the cover highlighting a super hot chick (the kind of chick we would like to meet at every corner of the street ;-)). But the doubt can invade the disc buyer: what if it was only a gimmick, or a cover-up? No! Because "Splashed" turns out to be a great album with real quality compositions. If the influences of Mötley Crüe and Poison are perceptible, Shameless nevertheless manages to develop a repertoire which is personal and, above all, very inspired. What is more, the group has harnessed itself to the production of the album.The songs, quite varied, are generally fun, catchy, sometimes airy, with a slight hint of subversion (but not too much). We never tire of listening to the candid "Don't hesitate", very rock n'roll; "Love game" and its intro riff directly inspired by sleazy-rock stamped 80's; but still the insolent and ferocious "Toy human", whose words openly mock contemporary society; "Change your world" and its energetic refrain supported by a rhythmic section which fires up the fire.Other good surprises include the sad and moving piano ballad "She's not comin 'home"; "Operator", an acoustic ballad a little reminiscent of "Every rose has its thorn" (by Poison), but whose refrain makes you want to jam with your neighbors to compensate. And how not to mention "U&I", title released from who knows where whose calm beginning suggests that it is a languid ballad before surprising the listener by assaulting it with heavy and venomous riffs. Steve Summers, in his own way, gives impetus to the compos with his vocal timbre halfway between Vince Neil and Stephen Pearcy; while Stevie Rachelle operates in a slightly rougher register as evidenced by the 2 titles on which he sings: "I love the way U make me sick", punchy at will; and "Getaway", a heady mid-tempo. The guitarist B.C / Keri Kelli, who came to lend a hand to the project, shows solid play and favors efficiency over superfluous demonstration, both in acoustics and rhythm and solo.No matter how hard I look for the little beast, I really can't find any major flaws in this album. All the titles (I said: ALL) are cut for the stage. In any case, it's rudely fun to listen to an exciting / hard / glam album as exciting, full of punch and panache as this one. Without being revolutionary, Shameless has significantly more personality and attitude than many combos praised by the press. And arrives at the right time to demonstrate that the glam has not said its last word and to close the valve to the piss-vinegar which buried it too quickly."Splashed": for the pleasure of the ears AND the eyes. It's called combining business with pleasure and quality glam albums like that, I want more.