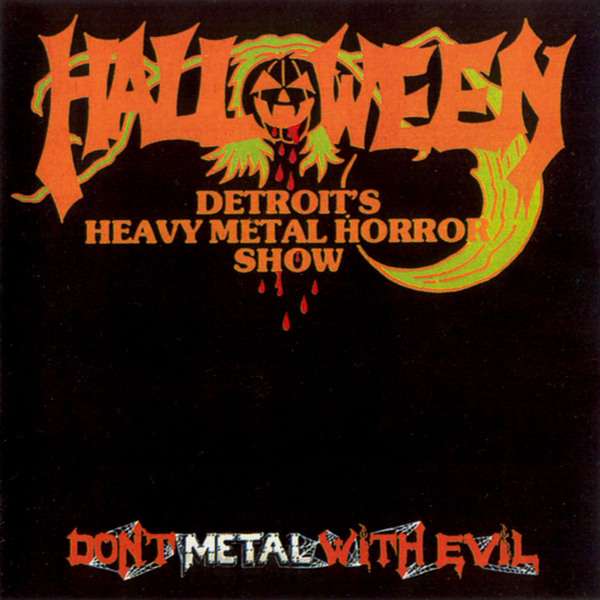 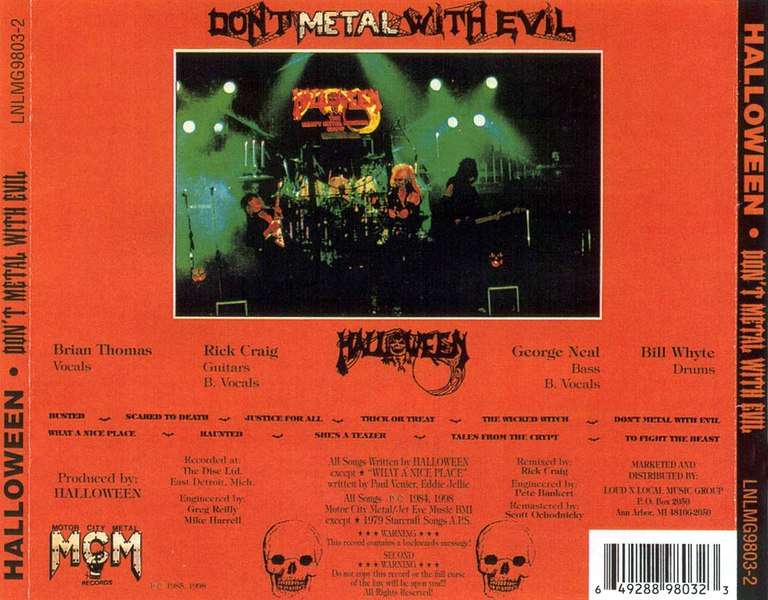 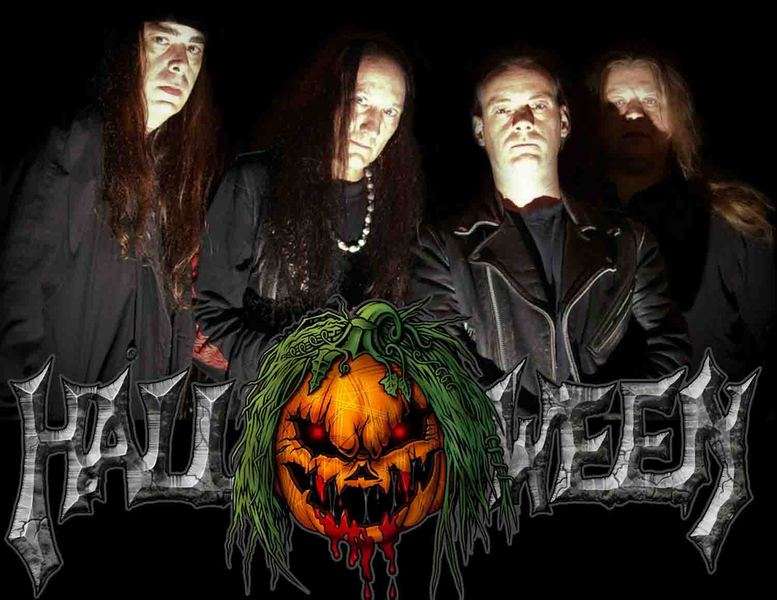 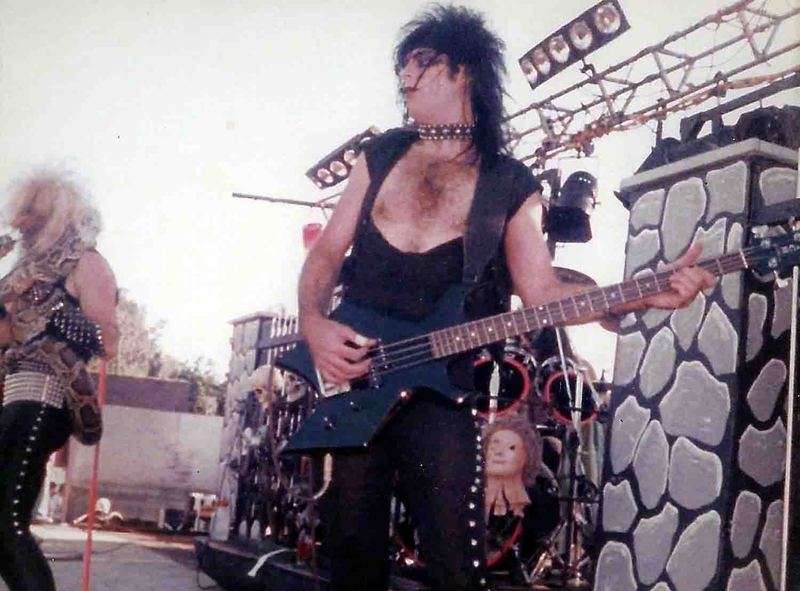 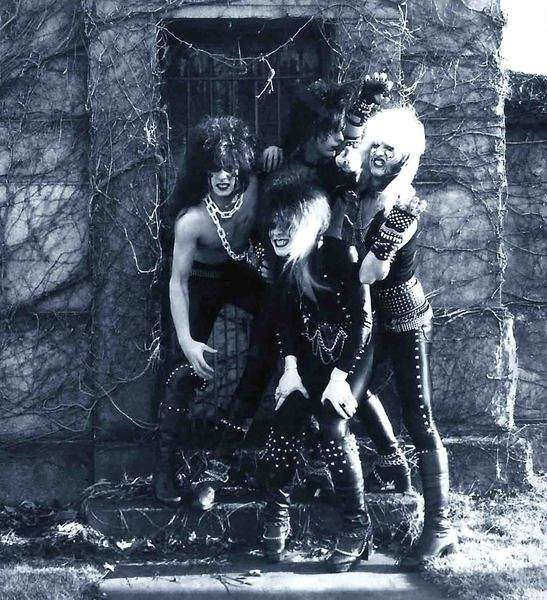 The group was formed in 1983 by members Rick Craig, Brian Thomas, George Neal and Bill Whyte. Its debut album Don't Metal with Evil was released in 1985 on the Motor City Metal label. In 1986, Halloween started work on its follow up to Don't Metal With Evil, Victims of the Night. However, the record was shelved until it was finally released on Molton Metal Records in 1997.In 1988, members Rick Craig and Bill Whyte left to pursue other careers. In 2000, Craig was asked to join Charlie Huhn and the British band Humble Pie with Jerry Shirley to go on a U.S Tour. He also at the time was playing in the band NOON, in which he and Ean Evans were the primary songwriters. Their replacements were future Godsmack drummer Tommy Stewart and guitarist Billy Gray, who would go on to play in the Ann Arbor/Ypsilanti-based rock band Fair Game (not to be confused with the band led by former Keel vocalist Ron Keel). Bill whyte went on to open his own recording studio and later (in 2003) joined Detroit based band Abandon and released a 5-song EP called "Project unrealty" which was Recorded, produced and engineered by Bill whyte. The band and EP got great reviews but Bill's time with the band was short-lived.In 1989, Halloween opened for Crimson Glory on a couple of dates on their Transcendence tour. In that same year, Halloween began work on a new album with Jon Drenning of Crimson Glory and Warren Wyatt management. The album never made it to the shelves.In 1990, Halloween recorded a 5 track demo entitled Vicious Demos with producer Rob Tylak, Stewart and Gray.The demo was released on cassette for show and promotion only and sold at Halloween shows.1991 saw a new lineup for Halloween, with the additions of former Erebus guitarist Tim Wright, guitarist Donny Allen (formerly of David Neil Cline's Trama and Black Onyx), and future Sponge (band) drummer Billy Adams (a.k.a. BA!). That same year, Halloween released No One Gets Out.The next few years saw a period of silence in terms of recordings. In 1997, former members Rick Craig and Bill Whyte rejoined, and Victims of the Night was finally released. After that, the band found themselves in debt, so they released a demo compilation called 1031, A Number Of Things From...The reunion was short-lived. Shortly after Whyte and Craig left once again. In that period bassist George Neal left only to return around 2004. A year before that, Tricks, Treats And Other Tales From The Crypt was released. Tricks, Treats And Other Tales From The Crypt is a compilation album released by Detroit-based Heavy Metal band Halloween (metal band) in 2003. It features re-recorded versions of classic Halloween songs, as well as one new studio track. It was recorded in 2002-2003.Halloween's breakout album Tricks, Treats and Other Tales From The Crypt was recorded in 2002 with what has come to be known as the Halloween 4.0 lineup. The 4th iteration of the band featured founding vocalist Brian Thomas, Axe Slayer Donny Allen, Jason "JDawg" Rossvanes on drums, Tommy Vendetta Guitar and John "Sixpac" Guarascio on Bass. The lineup was actually not originally intended to be Halloween, but unbelievable fan support for Halloween almost forced their hand. The band worked tirelessly to record a mix of classic Halloween "hits" and a handful of new/unrecorded tracks. The band played several shows stateside before being signed to headline the Keep It True Festival in Germany. It was during this era that the band finally made a run for Europe. The band had amassed a large cult following in Europe, but never had a lineup or management to get the ball rolling. The great success and European media blitz that followed the release of Trick, Treats, and Other Tales From The Crypt is what propelled Halloween into the spotlight it still enjoys today. Though short lived, "Halloween 4.0" is undoubtedly the incarnation that got Halloween out of Detroit. Following the departure of several members the band recorded a live demo in Detroit in February 2004 titled Not Dead... In The Murder City.In 2006, the album Horror Fire and E.vil P.ieces were released. The band's new studio album, Terrortory was released on February 25, 2012.

Don't Metal With Evil is the debut album by the glam/heavy metal band Halloween.Released in 1985, it was recorded from 1983-1985 in Detroit, Michigan.The album was re-released on Killer Metal Records on vinyl LP and cd with different bonus tracks.Decades later, I've still not made up my mind as to whether Don't Metal With Evil is one of the best, or worst album titles I've ever come across, but there can be no debate over the contents: some of the most entertaining Midwestern speed metal I've ever heard. The band name Halloween must have been in hot contention back in the 80s, after all it's about the coolest holiday on the calendar and just an utterance will conjure nostalgia for demons, spirits, witches, black cats, pumpkins, candy and horror in even the most stiffened, jaded mother fucker out there. This was a fairly theatrical act, fully embracing the subject matter into which they delved, and to this extent they might be compared to a King Diamond or Lizzy Borden, two of the 'shock metal' greats.The music is also comparable, because it's melodic and well written, accessible but raw in that delicious 80s aesthetic. I won't claim that Brian Thomas has the vocal chops of those masters, in fact his voice is the weakest link on this debut, but he does attempt some shrill, frightening notes on the album, and even at his worst he fit the splattering speed momentum of the band very well. The guitars are the dominant 'evil' here, Rick Craig spring loaded with riff after riff of thrusting, tasteful dirt rooted in Venom and Saxon, but a lot busier, with a propensity to shred off with numerous fills in pieces like "Trick or Treat" and "Don't Metal With Evil". The rhythm section was also well versed, Bill Whyte's drums crashing all over the mix and George Neil's bass strutting along as the perfect foundation for Craig's eccentricities.Don't Metal With Evil also has a great mix of material, between the vicious roadsters like "Busted", "Trick or Treat "and "Fight the Beast" to the mid-paced heavy metal hammering of "Scared to Death", "Haunted", and "What a Nice Place", reminiscent of a more complex Twisted Sister. There's only one arguable power ballad here, "Justice For All", and a potent, plodding piece called "Tales from the Crypt" that definitely channels a Maiden-esque appeal akin to what you'd find in late 80s Running Wild. The band doesn't take itself all that seriously, so you'll hear some cackling fun to inaugurate "The Wicked Witch", or some male cackling in "Trick or Treat". Lyrically there is some confusion, as the band veers through horror themes, typical 80s glam seduction ("She's a Teazer"), and even a few more poignant and serious ("Justice for All") themes, but such a blend is not uncommon for this period, and for 1984, Halloween's lyrics were actually decent. 'Demon spirits, hiding from the light Beggars and liars, roam the windy nights Witches and warlocks, die in bloody fights Trick or treat, it´s Halloween tonight!'..You're goddamn right it is, and Detroit's Heavy Metal Horror Show had a breakout record here which sadly never quite reaped the attention it could have. To it's credit, though, Don't Metal With Evil is one of those inspiring efforts that just hasn't seemed to age through the intervening decades, easily trumping everything the band have released since (though their output is sparse, they've continue to roll out new material every few years). Halloween were performing at an interesting nexus between the more radio prone glitz metal of their day ala Twisted Sister, Malice and Lizzy Borden, and the USPM of Liege Lord and Omen, and thus there's at least something here for anyone that craves poisonous, obscure 80s candy corn.