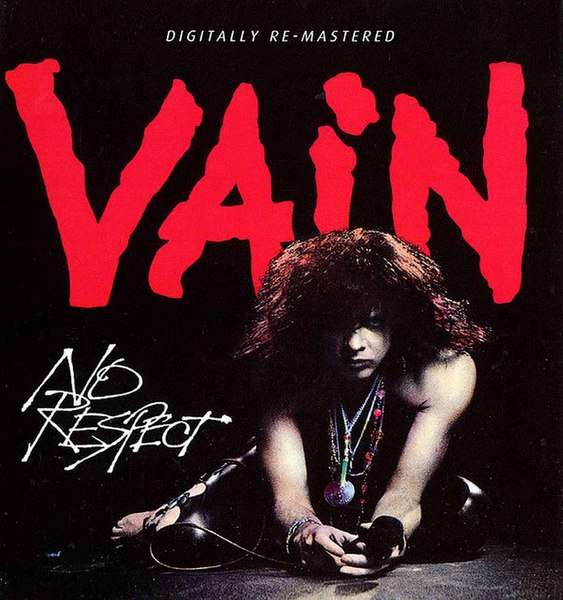 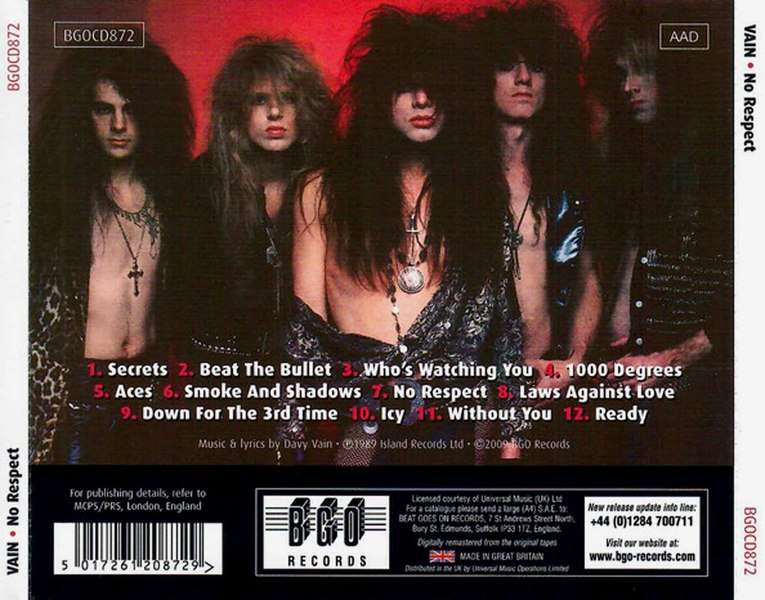 Vain is an American heavy metal band from San Francisco Bay Area, California, formed in 1986. As of 2011, the lineup consists of Davy Vain (lead vocals), Jamie Scott (guitar), Danny West (guitar), Ashley Mitchell (bass) and Louie Senor (drums).After recording a demo, Davy Vain founded Vain in 1986, adding Scott, West, Mitchell and drummer Tom Rickard to the lineup. They signed with Island Records in 1988, before releasing their debut album the following year, titled No Respect, which peaked at number 154 on the Billboard 200.Though they recorded a second album, Vain were released by Island in 1991, with West and Rickard departing the same year. Following the addition of both Shawn Rorie and former Guns N' Roses drummer Steven Adler, Vain renamed themselves Road Crew. However, they also disbanded in 1991. The band reformed in 1993 and went through a number of lineup changes for the release of their next two studio albums. By 2005, Scott and West had returned to the band, while Rickard would rejoin them in 2009 (before departing again the following year).To date, Vain have released six studio albums; No Respect (1989); Move On It (1993); Fade (1995); On The Line (2005); All Those Strangers (2010), and Enough Rope (2011).Davy Vain had initially began his career as a record producer, producing Death Angel's debut album The Ultra-Violence,before recording a demo with Metallica guitarist Kirk Hammett in 1986.After recording, Vain decided to form a band, in the San Francisco Bay Area, under his own moniker, adding bassist Ashley Mitchell, drummer Tom Rickard and guitarists Jamie Scott and Danny West to the lineup.rom 1986 to 1987, the band proceeded to play shows in San Francisco,before playing regularly in Los Angeles,where they also opened for Guns N' Roses prior to their success,and were featured on the cover of Kerrang! magazine.After showcasing to major record labels, including Geffen Records,Vain signed with Island Records in 1988.Recorded with producer Paul Northfield,Vain released their debut album entitled No Respect in 1989.The album peaked at number 154 on the Billboard 200.Critically, the album was also well received,with Vain featured on the covers of both Kerrang! and BAM.Geoff Barton would later give a positive review for Classic Rock describing the album as "a Maybelline-metalised debut par excellence – no 'perhaps' about it" with the music being "unharnessed, haystack-haired heaviness from beginning to end" and that "it's the Crüe at their most coarse and corrupted." In support of the album, Vain toured the US while they also supported Skid Row on their tour of the UK.

Only remastered version available of VAIN‘s debut album “No Respect“.While they were undeniably ‘glam’ in the image department, Vain sounded like no other band back in the day of this release (1989) and that still rings true today. Listening to “No Respect” now, it still holds up.Davy Vain had initially began his career as a record producer, producing Death Angel’s debut album The Ultra-Violence before recording a demo with Metallica guitarist Kirk Hammett in 1986.After that, Vain decided to form a band under his own moniker, adding bassist Ashley Mitchell, drummer Tom Rickard and guitarists Dylana Nova and Danny West to the lineup.From 1986 to 1987, the band, along with Jetboy and Sea Hags helped solidify the San Francisco hard rock scene – contemporaries included more metallic acts like Metallica, Exodus and Death Angel.Then Vain moved to Los Angeles, a circuit more suitable for their brand of music, where they also opened for Guns N’ Roses prior to their success, and played at every Sunset Strip venue.Vain gained a strong following and after showcasing to major record labels, Vain signed with Island Records in 1988. Co-produced by Davy & Paul Northfield, Vain released their debut album entitled “No Respect” in 1989 which peaked at number 154 on the Billboard 200.Critically, the album was also well received, with Vain featured on the covers of both Kerrang! and BAM magazines. In support of the album, Vain toured the US while they also supported Skid Row on their UK tour.“No Respect” is a unique album from the late 80s US hard rock scene. It’s a glammy / sleazy rocking LP, some kind of a mix between Guns N’ Roses, Ratt and Motley Crue at their most coarse and corrupted.But, as the band heralded from the Bay Area (of the well known thrash scene of the same era), this album has a touch more balls than many of the big haired contemporaries.The songs relies more on power riffs than sing along choruses, as ‘Beat The Bullet’ shows, while ‘Who’s Watching You’ features a catchy riff with some Ratt on it, same with ‘Secrets’ (check the chorus).The title track starts slow and melodic, but soon explodes into a hard rocking swagger, then ‘Icy’ is ridiculously catchy, riff-driven sleazy.The combination of Davy’s haunting vocals and the twin guitars of Jamie Scott and Danny West on “No Respect” were something that has never been equalled or bettered in my opinion by any late ’80s US hard rock act. Name me one band who sound remotely like Vain? Angry riffs, sleazy metal solos and an overall ballsy attack.While Vain – the band – never make it big, “No Respect” is regarded as cult classic, a unique album which still sounds relevant today. This BGO remaster (housed in card slipcase) does magic compared to the flat original CD release, and it’s the one to get.