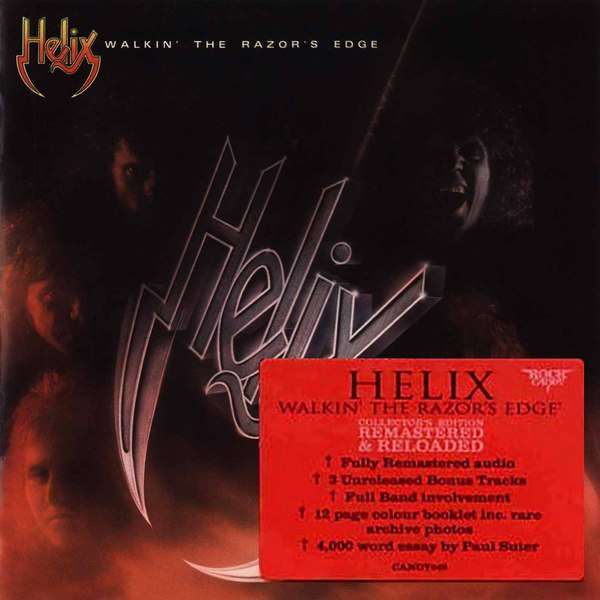 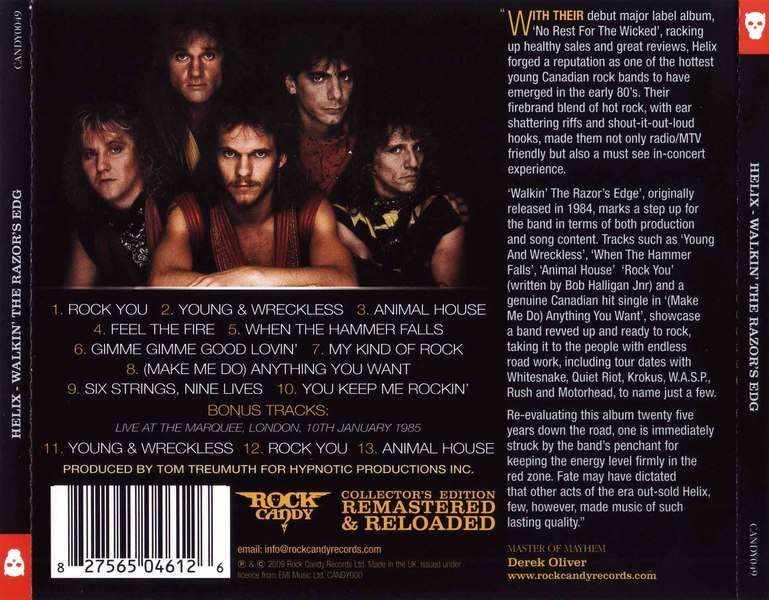 The Canadian heavy metal band Helix formed in 1974 in Kitchener, Ontario; comprising singer Brian Vollmer, guitarists Brent Doerner and Paul Hackman, bassist Keith Zurbrigg, and drummer Brian Doerner, the group debuted in 1979 with Breaking Loose. White Lace & Black Leather followed two years later, and was the first Helix release to feature new bassist Mike Uzilac and drummer Leo Nebudeck; with 1983's No Rest for the Wicked, the group signed to Capitol, substituting Nebudeck for another new drummer, Greg "Fritz" Hinz. Bassist Daryl Gray replaced Uzilac in time for the follow-up, Walkin' the Razor's Edge, which spawned the hit "Rock You"; 1985's Long Way to Heaven, meanwhile, topped the charts in Sweden. After touring in support of 1987's Wild in the Streets, Brent Doerner quit Helix, and the remaining quartet resurfaced with Back for Another Taste. In 1992, Hackman was killed when the group's van rolled down a 40-foot embankment after a concert in Vancouver; Helix forged on, however, with Brent Doerner returning to the lineup long enough to record 1993's It's a Business Doing Pleasure, which also featured guitarist Greg Frazer. In 1998, Helix -- now comprising Vollmer, Gray, Hinz, and guitarists Mark Chichkan and Gary Borden -- issued Half Alive. A collection of B Sides arrived in 2002, followed by the full-length Rockin' in My Outer Space in 2004. Power of Rock N Roll arrived in 2007.

HELIX ’80s most relevant albums ‘Remastered & Reloaded‘ by Rock Candy Records.“Walkin’ The Razor’s Edge” was Helix 2nd album with Capitol Records, and they went around the world with the hit ‘Rock You’.With their major label debut album No Rest For The Wicked racking up healthy sales and great reviews, Helix forged a reputation as one of the hottest young Canadian rock bands to have emerged in the early ’80s.Their fire brand blend of hot rock, ear shattering riffs and shout-it-out-loud hooks made them not only radio / MTV friendly but also a must see in-concert experience.“Walkin’ The Razor’s Edge” marks a step up for the band in terms of both production and song content.Tracks such as ‘Young And Wreckless’, ‘When The Hammer Falls’, ‘Animal House’ and a genuine Canadian hit single in ‘(Make Me Do) Anything You Want’, showcase a band revved up and ready to rock, taking it to the people with endless road work.And the album packs ‘Rock You’ (written by AORster Bob Halligan Jnr), one of the biggest hair metal anthems in history, which ranked in the Top 40 for several weeks.“Walkin’ The Razor’s Edge” is a kick ass record, an ’80s melodic hard rock classic.The Jon Astley remastering is really good retaining the integrity of the original sound, just adding some freshness and deep end.To make this Rock Candy re-issue even more interesting, we have three bonus tracks. All are taken from the rare ‘Live at the Marquee’ promotional-only EP (recorded at the London Marquee on January 10th, 1985). According to what I hear, it must have been a Helix feast over there.As always with Rock Candy, you get real value for your hard earned money: an excellent remaster, really good bonuses and a 12-page booklet in which you can read all about the band around the time they recorded this high energy gem.

+ Video "(Make Me Do) Anything You Want" (Official Video)