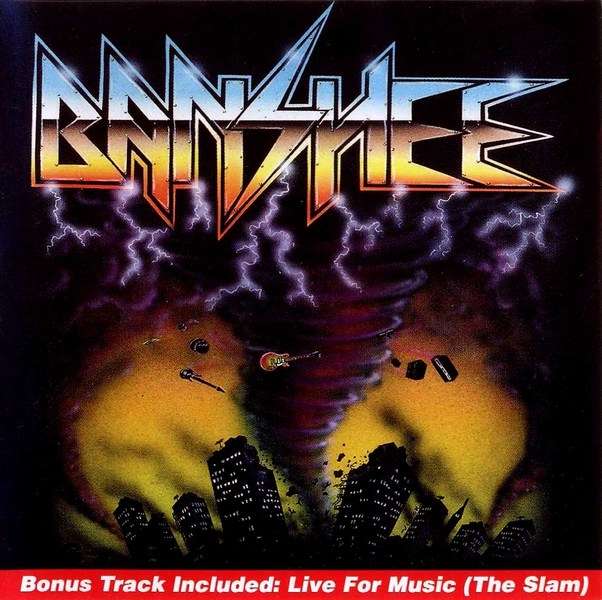 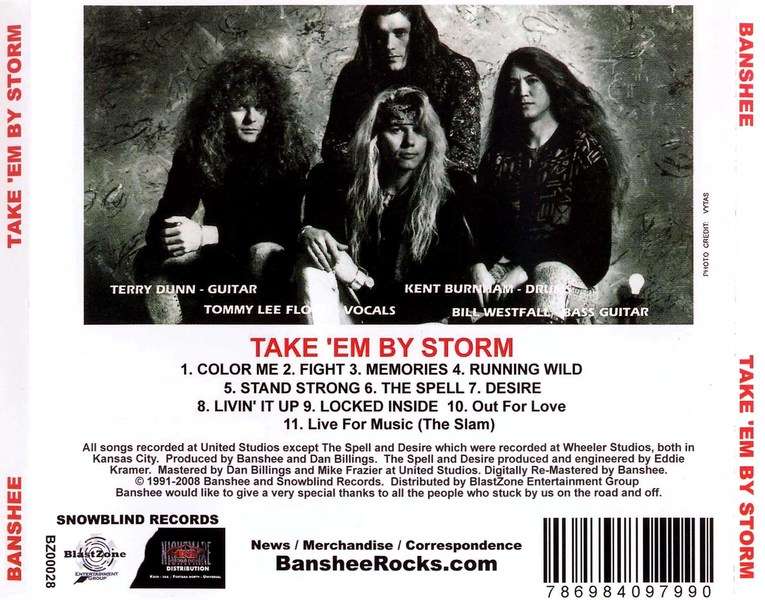 Banshee is a metal band that was formed in 1986 in the American Midwest. Although they shared the image and sound with the glam/metal scene of the 80s, their music fully shares the elements of melodic power metal: catchy guitar riffs, eclectic drums and bass, powerful guitar solos, and intense vocals.Banshee, a melodic power metal band from the Midwest, was formed in the spring of 1986. Made up of members from the popular Mid-West touring act LICK (Tommy Lee & Chuck Hopkins), Terry Dunn of Kansas City-based FRODO, GRANMAX, and Kent Burnham from Kansas City-based CRYPT KEEPER. By the fall of 1986, they released their first EP entitled Cry in the Night. Hopkins left shortly thereafter to pursue other projects in L.A. and was replaced by local Kansas City bassist Bill Westfall.In 1988, Metal Blade Records re-released Cry In The Night and included the song "We Want You" on a compilation record, Metal Massacre No. 9.Later that year, the band released their first full-length album, Race Against Time, on Atlantic Records' Titanium label, although their relationship was brief.In 1992, the band self-released their second full-length album, Take 'Em By Storm, with members separating shortly thereafter.Reunion shows were played in 1999, 2000, and later in 2008. In 2008, a deal was negotiated with BlastZone Entertainment Group to provide worldwide distribution for a digitally remastered Take 'Em By Storm and saw distribution reach on Amazon.com, iTunes, and Wal-Mart, with the re-release of the other albums following.In 2012, the band released their fourth studio album Mindslave on Snowblind Records. The album featured vocalist George Call (ASKA, Violent Storm, Omen), original bassist Chuck Hopkins, and drummer Marty Schiermann. In June 2012 in preparation for the upcoming tour, Hopkins and Schiermann were both unable to tour with the band and Mika Horiuchi (ex-Falling In Reverse and Celador) from Los Angeles, California stepped up on bass, while Vinnie E. Parma from Dallas, Texas took the role of drums.In 2014, Bill Westfall returned as the band begins work on the follow up to Mindslave.Paul Berrian joined as their new drummer in late 2014.In 2015, Bill Westfall left Banshee to concentrate on Kansas City metal band, Death By Diesel.

Banshee’s final known full-length was 1991’s ‘Take Em by Storm, and was released on their third record company, Snowblind, after the band was dropped by Atlantic, losing major record label support in the process. After the breakthrough power metal EP, the band took a marked shift in direction, heading further into hard rock territory; ballads, rock anthems, and bold, melodic choruses making use of simple riffs and huge backup vocals. Banshee often cops a bit of criticism for this, but I still feel this later stuff still kicks ass. While I am somewhat disappointed the band didn’t head down more of an aggressive power metal route, like Fifth Angel or other highly melodic, yet ballsy outfits, it can be said that present in their early work was a clear talent for crafting loud, shouty, ballsy anthems, that felt at least a pinch hard rock, and quite straight up heavy metal, with power metal credentials. This uncanny knack for churning out anthems seems to have taken more of an organic route, as opposed to pure “big label commercial pressure” or the bands own dreams of being the next Guns ‘N Roses. This type of music not only seems natural, and unforced from Banshee, but they often execute it with far greater prowess, technical proficiency and pure balls than the plebs.In ‘Running Wild’, not only in name, we edge somewhat into Judas Priest territory – crunching, aggressive guitar tones, and a touch of Rob Halfordishness coming through in some of the vocal chorus lines, particularly the banshee screams peppered throughout the thing, where octaves raise up to the stratosphere. This one is fairly simplistic, but rocks hard, and is a definite anthem. Yet again, and even with the year ticking over into 1990, Banshee shows off prowess at writing anthem after anthem, ousting the still lingering hair bands of the day, with their awkward fumblings on instruments and tired, played out teen love subject matters. ‘Stand Strong’ can be picked as yet another anthem, just by glancing at the name. This one features some decent enough riff sections, with some more of that simple bridge stuff that becomes common in the later Banshee offerings. The chorus feels a bit repetitive with “On and on, we stand strong…” but underneath that, are some pretty darn metal scaled riff type things being done, although you might not notice them; guitars can be less than conspicuous at times on the release. Either way, these are just two of the abundant number of rockin’ anthems present on the album. ‘Livin’ it Up’ is the kind of title that branded a thousand hard rock and heavy metal songs in the 80’s, but here, songwriting and vocal skills save the thing. Some nice production helps it along, too.While in tracks like ‘Memories’ we might be forgiven for thinking Banshee were trying a little hard to be the next Guns ‘N Roses, tracks like ‘Locked Inside’ with their heavy, Priest like riffing, and Iron Maidenish vocals, have considerable metal credentials. That, and a good 3 other decent anthems on this one, give the album some points, although it fails to produce anything that really matches moments on the previous EP and full-length. This isn’t their best effort, and it is arguably their most hard rock, but it’s still solid songwriting and musicianship, by an overlooked and underappreciated heavy/power metal outfit, that were on the verge of making it big in their heyday. I’d still recommend fans of the band to pick it up, and it’s a pleasurable listen, but I can’t help but ponder over what things could’ve been like if Banshee decided to keep their recipe 50/50 power: heavy metal, instead of successively diluting it with hard rock. Catchy, anthemic, but likely a little bit too hard rock for some.