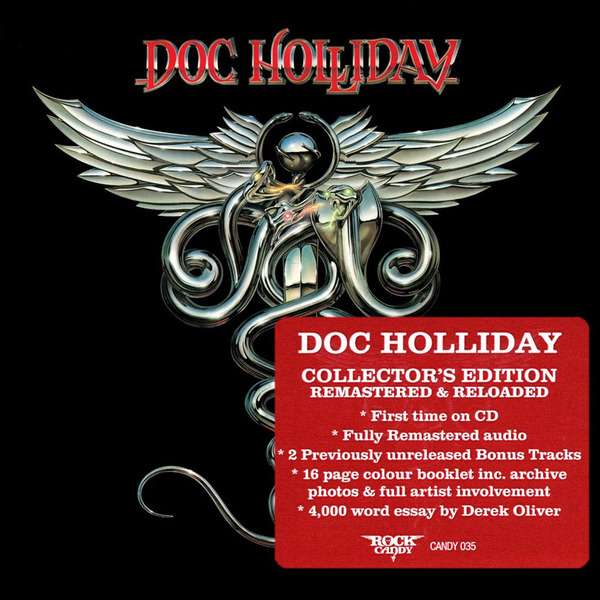 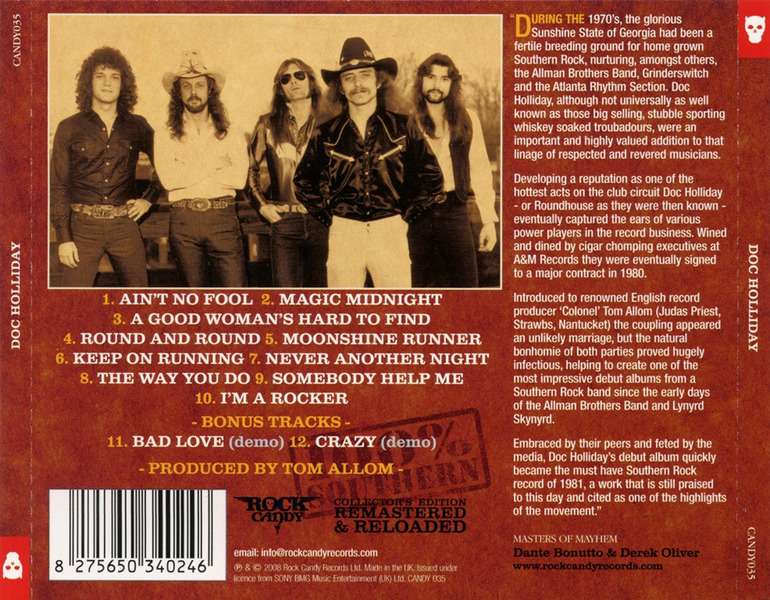 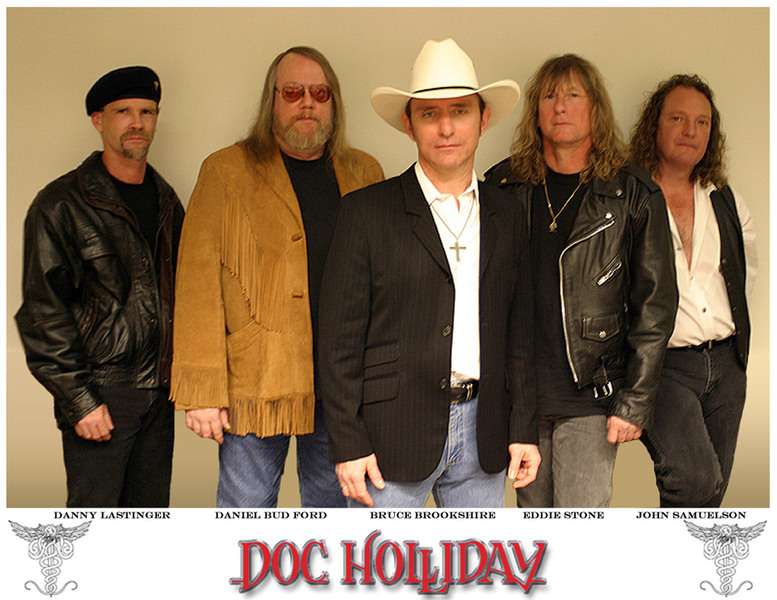 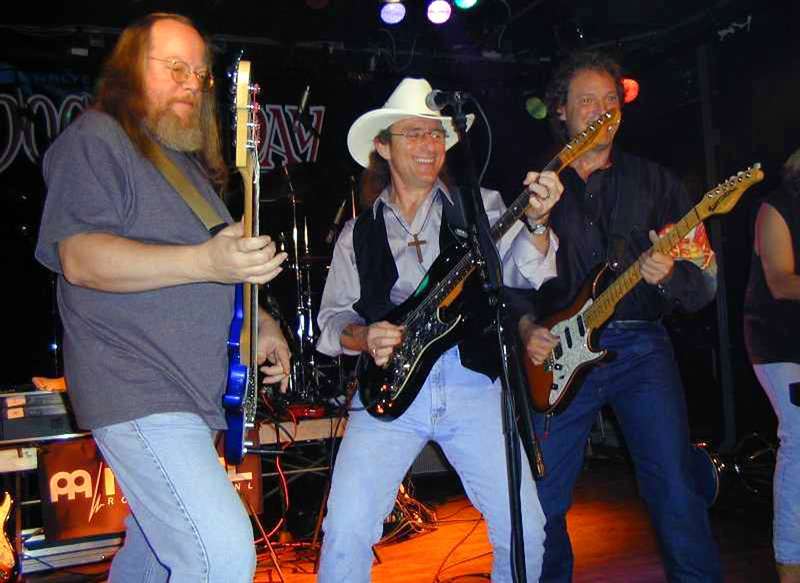 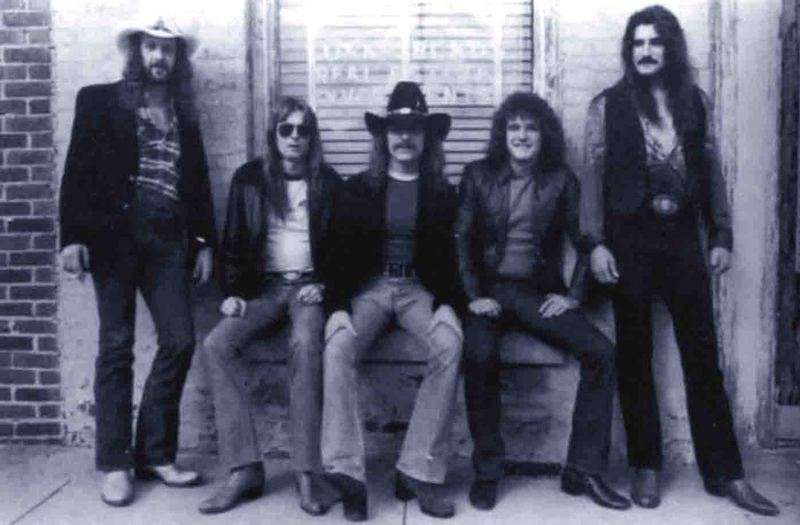 Doc Holliday was an American Southern rock band from Warner Robins, Georgia, United States, who were named after the American frontier gambler, gunfighter, and dentist, Doc Holliday.In 1971 Bruce Brookshire, a guitarist, singer and songwriter, along with his brother Bob, formed a blues band called Roundhouse. Towards the end of that decade, a later version of Roundhouse came to the attention of Nantucket's managers Bill Cain and Jet Matthews, which led to the group's name-change to Doc Holliday and a recording contract with A&M Records. Their initial recording line-up comprised Bruce Brookshire, John Samuelson, Ric Skelton, Eddie Stone and Herman Nixon, who recorded their self-titled debut album in 1980. It was produced by Tom Allom and peaked in the Top 30 of the Billboard 200. This was followed the next year by Doc Holliday Rides Again, which used the services of both Allom and co-producer David Anderle. The band went on to share tours with Black Sabbath, Gregg Allman, April Wine, Loverboy, Stevie Ray Vaughn, Charlie Daniels Band, Blackfoot, Pat Travers, Point Blank, Molly Hatchet and many others. Doc Holliday's third album, Modern Medicine, was recorded in Munich by famed German producer 'Mack', who was chosen by the band for his success with Queen, and with Billy Squier at that time. "His name was at the top of the charts then. It was that simple. When we first met (Mack), I said that I would provide the songs and asked that he handle the production his way." said Brookshire. "Techno, synthesizers, and Duran Duran were taking over the music world. We wanted a hit record and thought that was the best way to do it." The resulting album alienated some of their existing fan base for its change in musical direction.[1] After a lukewarm release, a failed tour, and being dropped by their management and record label simultaneously, the band ground to a halt in 1984. Determined to reinvigorate the group, a powerful and charismatic drummer named Jamie Deckard pushed Brookshire, Stone, and Samuelson to reform, and by 1986 the group released a fourth album, the harder edged Danger Zone on the London-based Metal Masters label. Its European success found the band returning to its classic style. During the mid-80's, keyboardist Tony Cooper, guitarist Tommy "Too Tall" Evans, drummer Ross Lindsey, original guitarist Ric Skelton, and drummer John Vaughn would contribute their talents to an ever-evolving lineup. Guitarist Billy Yates, later with Outlaws, had two stints in the band, and female backing vocalists June Reppert and Karen Barlow were featured for a time. In 1989, the album, Song for the Outlaw - Live, garnered good reviews.[1] A version of the group not on the album embarked on an extensive overseas tour in support of the release, with dates in Scandinavia, England and Wales, Switzerland and Germany. Throughout the 90's the band solidified with Brookshire on lead guitar and vocals, original member John Samuelson on lead and rhythm guitar, Daniel "Bud" Ford on bass guitar, and Danny "Cadillac" Lastinger on drums. They released the albums "Son Of The Morning Star" and "Legacy", touring Europe with each. The album "Gunfighter-The Best of the 90's" also came from this line-up. During that time, the band headlined festival shows in Scandinavia and Europe, including 'The Bulldog Bash', a large annual U.K. Music Festival in Stratford-Upon-Avon, which was featured in Kerrang! Magazine, and Headbanger's Ball on British MTV. By late 2000, original member Eddie Stone would rejoin the band and appear on all subsequent albums and tours including "A Better Road", "Rebel Souls" "Twenty-Five Absolutely Live" and "Good Time Music". For another decade the band continued to record and tour, maintaining a consistent presence in Europe[2] Doc Holliday's final release was a collection of remixed, lost, and bonus tracks titled "From The Vault". In 2011, the band embarked on their 30th Anniversary-Farewell Tour of Germany, Sweden, France, Belgium, and London (U.K.). A few years later, Eddie Stone (and occasionally Daniel Ford) recruited various musicians to perform under the name Doc Holliday at various one-off shows. These performances re-imagined the band to a segment of its hard-core fans, but has not led to a consistent presentation or any new material. Eddie Stone is currently the only Doc Holliday band member who still performs rock shows, occasionally as a member of Capricorn Records' group Stillwater. Stone today is primarily the keyboard and vocalist for Southern Rock legends Wet Willie featuring Jimmy Hall.

Debut album DOC HOLLIDAY ‘remastered & reloaded‘ with 2 bonus tracks.Originally known as Roundhouse, vocalist Bruce Brookshire and his bandmates had to switch to Doc Holliday when they found out that another band was already operating under the same moniker.A first, self-titled album was recorded in Orlando (Florida) and released through A&M in 1981. Under the guidance of renowned English recording engineer and record producer Tom Allom (Judas Priest, Black Sabbath, Def Leppard, KIX) the result was a blast.Great reviews fell to them and before they knew it, they toured (and drank) more than they cared for supporting Black Sabbath, Loverboy, Molly Hatchet and more.“Doc Holliday” is perhaps the greatest Southern Rock album ever recorded, on par with classic gems produced by more known stellar acts from the genre.Doc Holliday never reached a high level of popularity, but has managed to make a name for itself with their awesome blend of hard rockin’ riffs and the melody of bands such as .38 Special or Van Zant.All songs are killers, but if I have to pick one, “Keep On Running” is an all time Classic Rock, facemelter classic.Simply put, “Doc Holliday” delivers the kind of music to rock your socks off.This Rock Candy remastered edition is brilliant, not only marks the first time on CD for this great album, but also includes two previously unreleased bonus tracks from the original sessions.