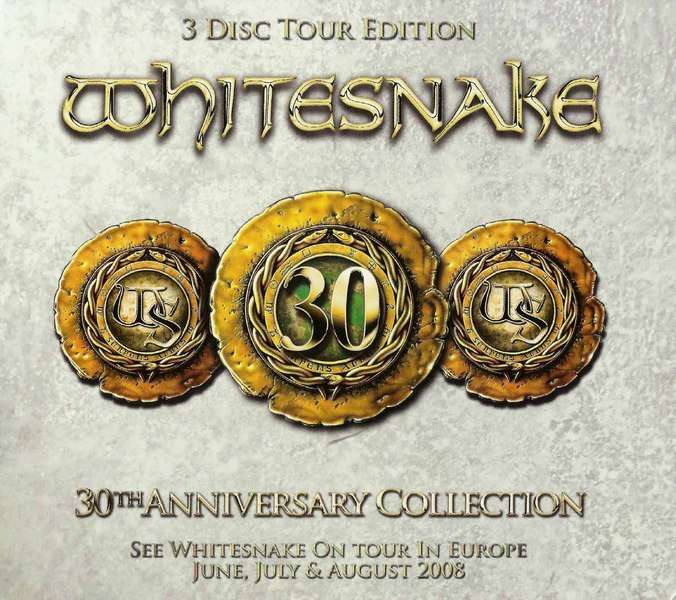 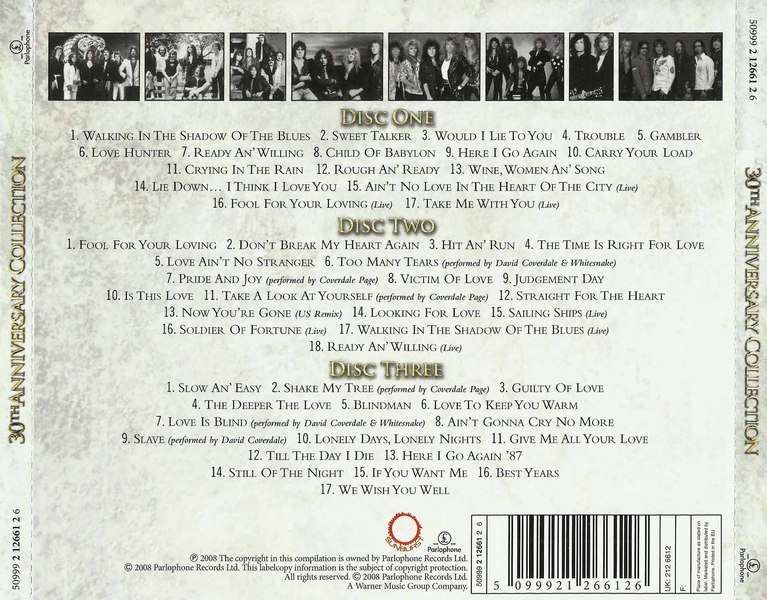 The suitably titled 30th Anniversary Collection is a triple CD collection released in 2008, celebrating the 30th anniversary of Whitesnake. It was released by EMI and charted at number 38 on the UK Albums Chart.In 2003 the compilation album The Silver Anniversary Collection was released featuring two CDs to celebrate the band's 25th Anniversary, but this compilation celebrating the band's 30th Anniversary features as a box set compilation consisting of three CDs. Disc one is essentially the same as the compilation The Early Years, and disc two and three are "updated" versions of the two-disc compilation The Silver Anniversary Collection.Few bands defined the sound or the fashion of 80s hard rock more than Whitesnake, the band pieced together by former Deep Purple man, David Coverdale, in 1977. There was the look: the epic, bleach-blond curls and tight black leather. There were the sleeves: lurid, masturbatory images from a world before political correctness – see the cover to 1979's Lovehunter, a naked woman straddling a huge, coiled python. And there was the music: chugging, swaggering rock 'n' roll that updated the smoked sounds of 70s blues rock with added swagger, machismo, and pomp.Despite a thorough repackaging and remastering job, though, this 3CD collection shines a light on a catalogue that has not dated especially well. It's not just the issue of sexual politics, although their standpoint is undeniably outdated: ''Do I look the kind of guy who takes advantage of a woman like you?'' asks Coverdale on Would I Lie To You, before adding, with a leer, ''Or is that what you want?''.Musically too, though, Whitesnake's bluesier fare feels both slick and stiff, a bad combination. Wine, Women An' Song and Sweet Talker take a clod-hopping rhythmic approach that’s far closer to Status Quo than the much more inviting, sleazy swing of AC/DC, and there’s none of the smoky, psychedelic edge that made Coverdale’s work in Deep Purple so inviting.There are some moments: Here I Go Again is a cheeseball Guitar Hero classic in the waiting, building from an organ opening reminiscent of Procol Harum's A Whiter Shade Of Pale into a grand, polished rocker with an addictive riff and some neat, subtle guitar melodies. It’s probably worthwhile revisiting some of Coverdale’s songs with Jimmy Page (see Shake My Tree), too. Ultimately though, this is one for the fans, and even they might be put off by the occasional omission: take for example Whitesnake's cover of Bobby Bland’s Ain’t No Love In The Heart Of The City, which appears here only in its live incarnation.