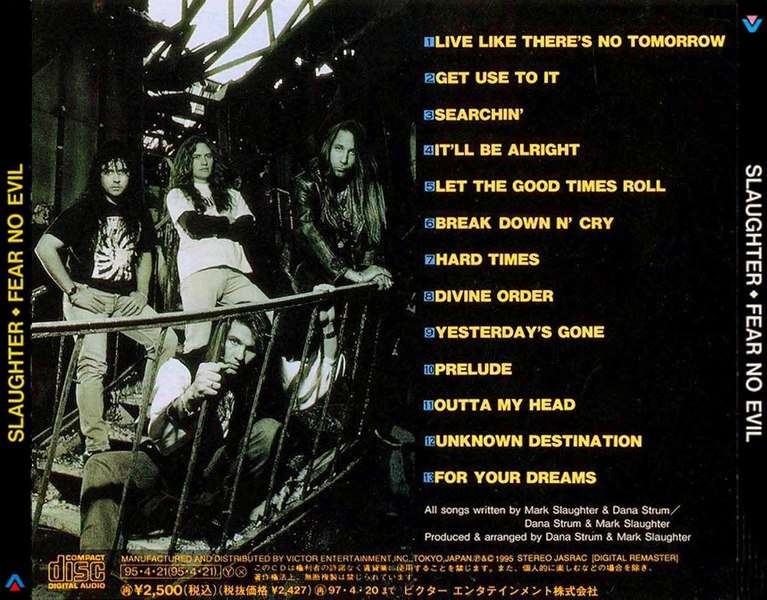 Slaughter is an American hard rock band formed in Las Vegas, Nevada by lead vocalist/rhythm guitarist Mark Slaughter and bassist Dana Strum. The band reached stardom in 1990 with their first album Stick It to Ya, which spawned several hit singles including "Up All Night", "Spend My Life", "Mad About You" and "Fly to the Angels". The album reached double platinum status in the United States.The band remains a steady act in national tours, mainly in the Rock Never Stops Tour which features several bands of the same era.Slaughter formed in Las Vegas, Nevada, in late-1988, out of the ashes of lead vocalist Mark Slaughter and bassist Dana Strum's previous band, Vinnie Vincent Invasion. Vinnie Vincent Invasion's record company, Chrysalis Records, took the $4 million contract away from Vinnie Vincent for overexceeding his credit line with the label, and transferred the contract to former members Slaughter and Strum. By 1989, Slaughter and Strum completed the lineup by recruiting lead guitarist Tim Kelly and drummer Blas Elias.Slaughter's debut album Stick It to Ya had three hit songs in the Billboard Hot 100: "Fly to the Angels" (#19), "Up All Night" (#27), and "Spend My Life" (#39). During this time, they were signed by Orion Pictures to record a song for the film Bill and Ted's Bogus Journey. The song, titled "Shout It Out", was accompanied by a music video and received heavy airplay.In 1992, they released their second album, titled The Wild Life. It had the Billboard Hot 100 hit "Real Love" (#69) and was certified gold. The band planned to record their third album in early 1994. However, in 1993 guitarist Tim Kelly was arrested for charges of drug trafficking, while bassist Dana Strum had a motorcycle accident that injured his playing hand. The delayed album was completed in February 1994 and a video for the first single "Searchin'" was financed by Chrysalis. Due to the changing musical climate and Chrysalis' absorption by EMI Records, Slaughter was dropped from the label in a massive cleaning house that included dismissals of other previously popular acts such as Billy Idol and Huey Lewis and the News.The band negotiated to be released from their label and signed with CMC Records, a new label that was working to keep hard rock bands on the scene. In 1995, they finally released Fear No Evil. Despite little success in the United States, the album did well in Japan. Guitarist Dave Marshall (ex-Vince Neil band) had to fill in for Kelly at times, due to his legal problems. Kelly's legal troubles ended and the band committed to their next album. In 1997, they followed it with Revolution. The album featured a more eclectic and psychedelic sound, but failed to make an impact. On February 5, 1998, tragedy struck when guitarist Tim Kelly was killed in an auto accident in the Arizona desert. This deeply affected the band, but they were committed to continue with the band. Dave Marshall briefly performed as a touring guitarist for Slaughter in Japan. In 1998, they hired Jeff Blando as Kelly's replacement and began working on their next album. A live album titled Eternal Live was released featuring some of the band's last performances with Kelly.In 1999, they resurged with Back to Reality, featuring Blando as the new guitarist. Blando was previously in Left For Dead and Saigon Kick. Slaughter continues to play many rock package tours with other acts that saw prominence during the glam era of the 1980s and early 1990s. During the summer of 1999, while on its own "Rock Never Stops Tour" (which included Ted Nugent and Night Ranger), Slaughter enjoyed a brief commercial resurgence, with the "#1 Track" on the VH-1 CD "Power Ballads" with "Fly To The Angels", "Up All Night" became the "#1 Track" on Rhino Records "Hard Hitters," and also took part in the Summer 2000 "Poison, Cinderella, Dokken and Slaughter" tour.In 2001, Slaughter was a part of the "Voices of Metal" tour featuring Vince Neil of Mötley Crüe, Ratt, and Vixen. Mark Slaughter and Dana Strum's former Vinnie Vincent Invasion band mate Bobby Rock played as a touring drummer for Slaughter, filling in for Blas Elias on some shows of the Rock Never Stops Tour. In April 2004, Slaughter released a DVD-A entitled Then and Now that features 12 songs and 50 rare photos of the band over the years. Slaughter also released a DVD that features all of the music videos and behind the scenes footage during the 2004 season. On July 13, 2007, Slaughter performed at glam metal festival Rocklahoma. However, Strum and Blando were not present during the band's performance, though they did perform with Vince Neil the following night. At the end of January 2008 Slaughter performed a show at Motley Cruise, a 4-day cruise in the Caribbean with Vince Neil, Skid Row, Ratt, Endeverafter, Lynam.Slaughter performed a show in Pocatello, Idaho on July 11, 2008, with Mark Slaughter and Jeff Blando were the only members from the recent lineup of Slaughter, Blando, Strum, Elias and Christian that was integrated as guitarist and vocalist in 2008. Slaughter performed a show in Fargo, North Dakota on June 12, 2010, with Mark Slaughter, Dana Strum, Jeff Bland and Blas Elias performing. Slaughter will perform a show at Halfway Jam festival in Royalton, Minnesota in July 2011, with Lita Ford, Cinderella, Skid Row, Stephen Pearcy, Kix, Quiet Riot and Firehouse. Slaughter performed at the DreamMakers Theater at the Kewadin Casino in Sault Ste. Marie, Michigan on February 24, 2012 along with Stryper and Lynch Mob. Slaughter performed at RockUSA in Oshkosh, Wisconsin July 18, 2013 with Great White, Queensrÿche, Anthrax, and Twisted Sister.

Fear No Evil is the third studio album by American glam metal band Slaughter. The record was completed while the band was still signed by Chrysalis in 1994. It was finally released in 1995 with CMC International Records.The album was preceded by the troubles and controversies of the band. Singer Mark Slaughter came from a nodule surgery on his vocal cords (1992), guitarist Tim Kelly was charged with drug trafficking, and bassist Dana Strum was rehabilitating from a dirt bike accident that injured his playing hand.A video for Searchin' was made.The tracks "Prelude" and "Unknown Destination" were both used in the Funimation dub of the Dragonball Z special The History of Trunks.